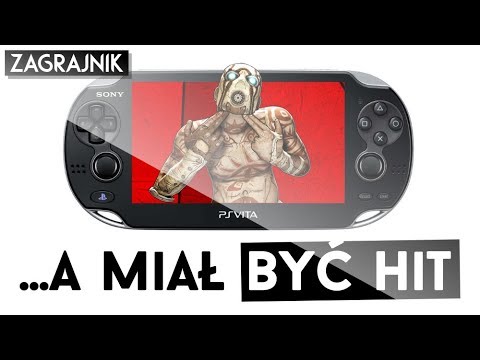 Powerful guts, great design and a fantastic screen Here are the ingredients that you have chosen to create the perfect portable console

one game is played! Yeah and it was supposed to be a hit Yes, if there is any console that can be said to be a hit it is definitely Vita I mean – of course, this is not the worst-selling console in history With her 15 million copies, she left it far behind such financial duds as for example Dreamcast, which barely reached up to 9 million sold items or N-Gage, which found only 3 million buyers Mother, IT was just a dud

Only we're talking about Sony equipment here Sony, which has been around since the first Playstation was the undisputed leader in the field of consoles and which has never before passed such a large flap Well, maybe not counting only the bizarre PSX released in Japan It was the easiest way to visualize what a flop Vita was comparing the results of its sale with the remaining consoles of the Japanese giant Let's be optimistic that Vita sold 15 million copies, and not as some estimates suggest

Even compared to the second Playstation 4 so far, which has found around 76 million buyers to this day the result is just ridiculous, let alone talk about Playstation Portable and Playstation 3 which sold in 82 and 83 million copies Comparing Vita to the first Playstation with 100 million units, or a record-breaking Playstation 2 with over 155 million, it's already kicking the lying one So Vita is a dud and there is no doubt about it And no, the fact that in Japan the console sold five million copies does not mean that she was a hit there, especially that the PSP found three times more buyers there It's just in Japan that Vita sold herself

well And only there Despite the great start – over one million units have been sold in the first weeks the fact that there is something obviously wrong with Vita, became clear a few months after its premiere

And then everyone was asking themselves the question – what is the problem? I mean everyone wondered about it except Sony, which apparently decided that the best solution would be to hide the head in the sand And he does it to this day

And we will come back to this in this film At the very beginning, however, let us explain one thing – the reason for the failure of Vita, was not Vita herself For anyone who had this equipment in their hands for a few hours, it was immediately clear that it is a beautifully designed, beautiful console with huge potential Maybe a bit too expensive – but hey – the premiere one thousand zlotys did not come out of nowhere, because in its time it was the most powerful mobile device on the market And everyone knew it

Yes, but we'll come back to it again Most people, therefore, suggested that the growing market for mobile games was responsible for the failure of Vita I think that such nonsense could come up only with someone who never had a portable console, because fans of handhelds have always known that the mobile market has never been and never will be it was a direct competition for pockets Mobile games are usually spoiled by micropayments, popierdki, while full-fledged and extensive productions have always been made for pockets And although there are more and more mobile gaming ports today, it was in the days of Vita's debut that they were a couple on a cross, so they also could not be the cause Most important, however, is that touch control will never replace physical buttons, and especially those that were created with a view to playing For this reason, the fun on the phone will always be less comfortable than on a pouch or simply games written with touch control in mind will be much simpler and that's what happens most often

And let no one tell me that you can always connect to your phone, because this is not about playing on the phone, to tweak some additional equipment I omit the fact that in this case you would have to put the phone and resist something, which completely distorts the idea of ​​mobile playing ["slip-in" pads are also only a half measure, because most games do not support them anyway] It also makes no sense to say that it's better to have one phone for everything than the phone and console only for playing Aside from the fact that buying a console and a regular phone comes out cheaper, because a decent phone for playing is even today a minimum price of PLN 1,500, and in 2012 it was twice as much But fan of pockets like pockets They like to have them, they like to wear them and they do not bother them And let's not forget that they are sold at the same time 3DS and PSP, somehow "they did not lose the fight against mobile games", which is the corroborating proof that such a fight has never been So no, it's not mobile games that killed Vita Also, the high costs of game production did not kill her, because although they were noticeably higher than in the case of competitive 3DSa, in 2012, Vita had huge potential for porting, and in addition, the PSP has already paved the way for turkeys – here, of course, the Minis series This means that between the expensive exclusions, you CAN be relatively fast, easily and cheaply flood the market with attractive plungers It was possible if only someone wanted

And Sony obviously did not want to make sure that there were games on Vita and that's where I would see the main reason for her failure In the sense – do not get me wrong Of course, Sony created this console with a view to earning, evidently, however, had nothing prepared except the console itself No far-reaching plan, no emergency plan Only the hopes that the console must sell well, because it is so good It was all the more stupid that the PSP already had serious problems with maintaining the market, and the reason was also no games But the promises were buzzing As Andy House, the then head of Sony Computer Entertainment International said just after the premiere: One would like to say – yeah but actually in 2012, a total of 70 games appeared on Vita, which was not a tragic result

A year later, however, there were only 46 of them, and among them only a few really worth exclusive exclusive'ów The year after the year of games appeared just as little, and Vita slowly ceased to interest even the greatest of her enthusiasts Just why were there so few games? Looking at the number of titles published by Sony Interactive Entertainment it might seem that at least at the beginning it did the homework, delivering enough of your own games to encourage external publishers In 2012, they were 34 games The problem is that only 13 of them were available in box sales, and most of them were medium-sized Ecolibrium, Top Darts or When Vikings Attack! Even among box games, there were only a few obvious hits like Gravity Rush, Little Big Planet or Uncharted: Golden Abyss there were, however, open black puddings like Little Deviants or Reality Fighters So for the first, the most important throw of Sony went rather in quantity – but still small than in quality, offering virtually no game that would break the players' panties off their heads, as it was in the case of Zelda on the Switch Despite the weaker sales of the console throughout 2012 and more and more signs that it's going wrong, a year later

it was even worse Instead of throwing the third gear, grit your teeth, make money, and do everything to somehow convince the players to Vita Sony assumed that maybe somehow it will be and in 2013 it threw the market only 23 games

And even despite the fact that virtually every of the nine box productions was worthy of attention especially Killzone: Mercenary, Soul Sacrifice and Tearaway it did not change the fact that the situation was tragic For other publishers it was a clear sign that even Sony does not take its own console seriously and if they did, they did not intend to invest more money in it Because there were so few games on Vita, and even fewer of them were announced, also those players who planned to buy it, postponed this idea for later, hoping that the situation will eventually improve What drowned Sava was Sony's uncertainty about his own work It turned out to be contagious, and first its publishers and ultimately also the players themselves

Yes, everyone loved Vita, but nobody wanted to give her money fearing that this investment will not bring any profit Vita had to die, and the verdict had already fallen on her in the middle of her first year of existence 2015 was the last year in which Sony has released some games for Vita but all without exception were either average or double; A year later, only 25 games from other publishers appeared on Vita, and last year there were 12 of them Sony's bizarre marketing decisions also did not help No built-in memory connected to absurdly expensive, dedicated memory cards from the very beginning it stank of all the jump to the cash register, and although Sony has complained that it has created its own standard of cards only for the sake of their performance and players' comfort no one believed in this fairytale The situation was similar with a non-standard charging socket, which was supposed to contribute to faster loading of the console, in fact, it was just another obstacle The frenzy of bitterness was that the communication with the computer could only take place through a special application, which led to absurd situations in which to quash the Seym, it had to be copied in each and every one of these, weighing several gigabytes of the game! At the moment, the official status of Vita is unclear

Sony has never announced the suspension of console production, but at the same time in 2015, it announced that it will no longer include it in sales forecasts For years, Vita disappeared so quietly from the store shelves around the world and today a new item can only be obtained in Japan, where it still has several hundred thousand buyers annually Do you remember when I said that Sony hid the head in the sand about Vita? Well, know that the Polish Playstation website still sends us back to the non-existent offers of trading partners, where we can allegedly buy Vita Vita, therefore, is dead, yet not entirely Sony, for a long time, does not do anything with it anymore, and yet it is still supported on the PS Store, and every now and then a new game will appear on it

So it looks like Vita is the only living corpse in the history of consoles After hearing all this, probably most of you have finally made sure that you should not bother with Vita

Well it's not good, because the truth is, that there has never been a better time to buy Vita [further subtitles – soon!]

How to BRICK and UNBRICK 3DS console

How to make DS Games look better on the 3DS