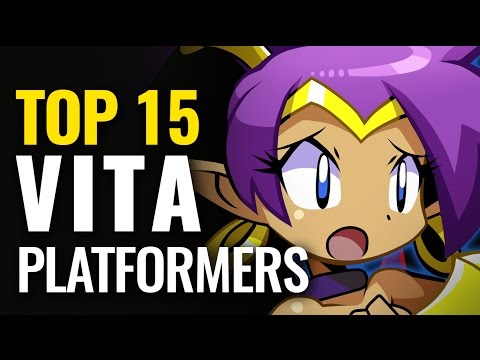 It’s unlike most Platformers, and it’s centralized more on the Turn-Based RPG elements Child of Light is a magical adventure of Princess Aurora and her friends to restore a decaying Kingdom caused by an Evil Queen This game is heavily inspired by classic Fairy Tales and Medieval Mythos Lead your group of innocent friends by showing your heavenly powers while speaking in rhymes It’s sidescrolling journey leads you to underground caverns, frozen mountains and fiery volcanic areas with beautiful hand-drawn backdrops

To top it all off, it even has a gorgeous soundtrack The game is pleasing at every glance, stopping you from the real world mess, and puts you into their captivating world It has a PlayScore of 785 14 Sound Shapes Sony has a knack for visually stunning yet odd Platforming games

Patapon took the world by storm with its adorable little Patapons, LocoRoco did a great job with the PlayStation Portable’s Right and Left shoulder buttons But Sound Shapes takes it to something different Developed by Queasy Games alongside Sony Santa Monica, be a cute blob trying to overcome various obstacles on each level It’s powered by the musical beats so you have to time your movements right to get ahead to the objective The game is also supported by talented artists such as Beck, Deadmau5 and so much more

Control your character as he traverse high towers and venture into unknown glitches in a serene open-ended world filled with multi-dimensional possibilities After being randomly transported into another dimension, use your newly acquired abilities to control the world Switch between 2D and 3D environments with a press of a button, and leap towards each level’s goal Reach the end of the journey and find out the meaning of reality and perception It’s an intelligent game with a brilliant game design, perfect for the PSVita

It has a PlayScore of 800 12 Guacamelee! This game is as Mexican as it can be Follow a Luchador Juan and his adventures to the land of the living and the land of the dead to save the El Presidente’s Daughter from the hands of an evil sorcerer To save her, players must master the art of punching and grappling opponents

Unleash your Luchador skills by creating consistent combos to smack and grab enemies to a pulp Use the game’s unique ability to travel between the living and dead worlds It’s a colorful platforming experience, and it really takes Mexican Culture to its creative form It has a PlayScore of 808 11

Stealth Inc 2: A Game of Clones Pull of the great escape in this otherworldly stealth-platformer Lead your band of tiny robot clones out of a mysterious laboratory full of deadly obstacles and explosive guards to experience that sweet release Unfortunately not everyone's gonna make it Allow your clones to help you solve the puzzles in each stage by opening doors, activating switches, and becoming unwitting sacrifices to laser beams and heavy objects There's not time to mourn though, with drones and robotic dogs watching out for your every move

So lurk in the shadows, and don't make a sound If all that's a piece of cake to you, there's a level editor for you create your own challenges, and share them to the world! It has a PlayScore of 814 10 Joe Danger 2: The Movie Our favorite daredevil returns in this blockbuster-sized sequel to Hello Games’ death-defying platformer slash racing game

Joe Danger makes a daring leap to Hollywood for more insane stunts in his first ever action movie This time, sharks and ring of fires aren’t the only problem anymore Make the best Hollywood Action Movie as you evade the touch of death with laser-firing robots, or survive the harsh climates of snowy tundras, and hostile jungles Just another day of Joe Danger To impress the director, finish it's over 100 levels filled with danger at every side

The game is so enjoyable, it made everyone forget that this is the same company that developed No Man’s Sky It has a PlayScore of 814 9 Rocketbirds: Hardboiled Chicken There’s something oddly fowl about this game, if you know what I mean Ratloop Asia’s action platformer takes you to the shoes, or foot of a badass chicken named Hardboiled Chicken

Yes, you heard that right He sets his mission to stop an evil Penguin Regime from breaking down society The game is designed like a cinematic action film where chickens and animals fight for power It’s silly, but the gritty feeling of shooting evil animals as a chicken, is a joy There are tons of collectibles to find in the game and a fun coop, I mean “co-op” mode to enjoy with your friends

It has a PlayScore of 823 8 OlliOlli2: Welcome To Olliwood This sequel to the popular skating game from Roll7 makes a another gnarly entry to the PlayStation Vita This time, Olliwood is your playground! The subtle technical feats of the previous game have been tweaked to cater new and experimental scenarios The game boasts new combos, ramps, worlds and levels for that daily grind

You could even play with a friend and skate to your heart’s desire in its Multiplayer Mode Aside from that, the game also features a Trick book called the “Tricktionary” to record and witness the various skating tricks you did It’s simple finger-flipping controls has been refined to the PlayStation Vita Fans of this genre will truly be delighted! It’s probably better than Pro Skater 5 as it has a PlayScore of 826 7

The Swapper A game that’s as brilliant as it is complex Facepalm Games’ platformer-puzzler takes Science-Fiction into a world brimming with beautifully crafted puzzles and dark, haunting stations Play as a scavenger trapped into its grim world This game won the hearts of players and critics due to its unique gameplay element called “Swapping”, this enables the player to swap his consciousness to the game’s myriad of clones Use this acquired ability to solve its ccomplicated puzzles and survive in its eerie abandoned halls

The game’s story is also deep and punctures the mortality and morality of your thought-processes It’s a remarkable game and it has a darn good PlayScore of an 847 6 Rayman Legends When it comes to the trippiest Platformers ever made by man, we’re gonna have to say that Rayman always make it to every list Ubisoft’s highest-rated platformer makes a return after the breakthrough success of Origins

Step inside painting after painting and dazzle in its colorful visuals Tons of surprises are still waiting in store for the players in each level Engage in memorable boss battles and witness the creative use of platforming elements in a videogame ever Timing is essential in this game and the difficulty remains a constant challenge for young and old players If anyone’s looking for some co-op fun, grab a friend and jump, leap, and roll in its psychedelic wonder

It has a PlayScore of 852 5 Oddworld: Abe’s Oddysee – New N’ Tasty This ground-up remake of the popular 1997 game makes its way to modern generation platforms New N’ Tasty delivers a smooth graphical overhaul to the life and times of the iconic Mudokons Follow Abe and his adventure to save his entire species from impending genocide

The game remains the same just like the original with the exception of the added difficulty setting Help Abe as he collects Mudokons and escapes from RaptureFarms Solve tons of puzzles in side-scrolling fashion and stop impending obstacles from blocking your path The more Mudokons you get, the more chances you get the Good Ending! The lesser, well, you know what happens It has a PlayScore of 8

53 4 BITTRIP PRESENTS… Runner2: Future Legend Of Rhythm Alien Yes, guys That’s the actual name of the game It’s like taking random words out of a hat

Coming from the same game called BITTRIP, players run around maps accompanied by the joyful sound of music while trying out new moves and traversing new areas For a Musical-Platforming game, it’s the first to deviate from the classic BITTRIP games The 3D Environments make everything so surreal and it fills the players with trance in every step of the way

The game has over 5 different worlds, these worlds make up for a unique experience in every run Aside from that, the cutscenes are voiced by Mario It’s a fantastic running-platformer that mesmerizes players in every learning curve It has a PlayScore of 858 3

Shantae: Half-Genie Hero Wayforward’s leading Platforming game makes its way to the PlayStation Vita Follow Shantae and her friends as she saves her town from a mysterious dark magic Use Shantae’s damage-dealing hair to whip enemies back and forth Players can also transform her into different animals to solve the game’s puzzles The game is so colorful it feels like you’re watching a cartoon

This is the Fourth game of the Shantae series but this is the first to ever showcase High Definition visuals and smooth gameplay designs Enjoy its unique levels while listening to the game’s groovy tunes It’s DLC’s add new characters to the journey including Risky, Shantae’s rival It’s an eye-popping platformer and it has a PlayScore of 861 2

Tearaway When it comes to Platforming, PlayStation Vita users will never forget to talk about Tearaway It’s their most beautiful exclusive Making it a staple of next generation platforming in the years to come It’s charming, delightful and isn’t afraid to touch your heart In a paper-filled world, guide your hero as he sends an important message to YOU

It’s a page-turning experience once you get to know the game’s story with a flurry of beautiful imaginations unleash the potential of your imagination Using the PS Vita’s touch and gyro controls, solve puzzles in the most creative of ways Its PlayStation 4 version, Tearaway Unfolded, has also made records But this game has a PlayScore of 8

76 Here are the Runners-Up before we reveal the number one: 16 LIMBO Embark on a gloomy journey to a monochromatic world developed by PlayDead Studios Help a young boy reach his destination by solving physics-based puzzles or escaping from hideous creatures It has a PlayScore of 7

84 17 Tales From Space: Mutant Blobs Attack This side-scrolling platformer oozes with personality and casual fun Be a Blob and solve various puzzles with the help of your slimy form It has a PlayScore of 7

83 18 Nihilumbra As emo as it could be This dark puzzle-platformer lets you take control of Born Plagued with a curse, escape from the darkness with the use of PlayStation Vita’s touch controls

77 1 And the best PlayStation Vita Platformer is non other than Shovel Knight Plow your way through the castle halls in Yacht Club Games’ universally acclaimed platformer Return to the days of old and witness Retro-Gaming come back to life Control a brave Shovel Wielding Knight as he digs deeper into the confines of an evil castle Use his trusty shovel to defeat enemies, solve puzzles and defeat an Evil Enchantress

All in the name of love The game is a record-breaking success It’s the only Indie game to garner the respect of players and critics with its successful Kickstarter campaign It’s out on almost every modern generation platform and by each release they never disappoint Its 2 Expansions: Plague of Shadows and Specter of Torment are a wonderful addition to this 8-bit Retro Adventure

This is how you make a Kickstarter campaign Take note, Game Developers It has a PlayScore of 881