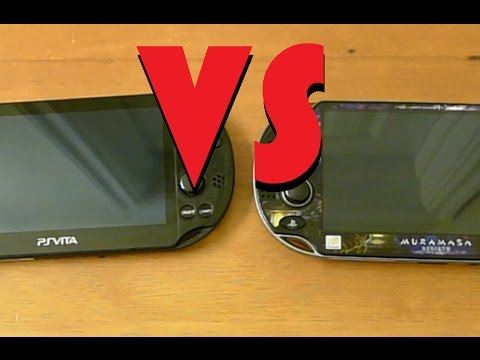 Here's the sides Now, there's a couple key differences between these two systems For one, this one has better battery life, and uses a non-proprietary micro-USB It's the same one that so many of like, speakers and stuff that I have use and then the other one uses a proprietary one

See, this one uses that, and this one uses that I have a bunch of stuff, including the controllers for the PlayStation 4, that use this (micro-USB) Nothing uses this and there's a problem with these particular cables, where they're a little weak on the ends And because of that, finding original equipment for it is a little tougher In fact, most of these cables die horribly Similar to what happens with some Apple cables The PlayStation Vita Slim actually has kind of a 1up on that

Also, the Vita Slim has better battery lifethan the original Vita and redesigned buttons and triggers And the little back touch panel is significantly smaller Now, let's actually talk about the main difference between these two Aside from this one being slim, kind of a more plasticy build, less metal This one's metal and plastic and then it also has — This one in particular, you can put a SIM card in it, and that was never anything useful But yeah, let's go ahead and take a look at the big key difference between these: the screen We're gonna turn this off for a moment This light

Oop Come back on OK see Here Let's go ahead and do it this way What I'm gonna do is, this one has an OLED screen, and this one has what seems to be an IPS LCD screen

Gah It keeps turning off because *sigh* the Vita doesn't like to be on, for some reason Oh! One thing I find kind of amusing about these is that the logo lights up on this, whereas on the top you've got kind of a Nintendo 3DS style green and data light Okay, let's go ahead and pull through I've got different images I'm using for this And for this we're going to go ahead and detach this from the tripod Specifically to show off the differences in the screens

But when you move to the leftto the right One thing I noticed on this is actually, there's a bit of a bluing to the — there's a blue hue to the OLED screen

Now, we've got this set up so we can go and cycle between several different pictures To the left And to the right

To the left And to the right There's slightly deeper blacks on the OLED screen, of course left

You won't notice, actually, too much of a big difference between the two One is slightly darker Slightly deeper blacks But their viewing angle isn't much differentwhich is kind of a nice thing Again OLED

We're showing this with static imageswhich have a diversity of color On some of these, you can tell a clear difference between the two In terms of, well, blue depth On something black and white

And the reason for that is because OLED screens, the blue tends to die over time Meaning, in about three to four yearswith constant use, an OLED screen will have a dead blue level Meaning, all of the pictures will look a lot warmer than they're supposed to To combat that, they over saturate the blue

Personally, between the two, I kind of like the lighter feel and better buttons of the PS Vita Slim And there really isn't too much of a difference between the color depthsbetween these Here, we're using a Steam World Dig imagefor our — there it is on OLED, and there it is on LCD These are just different backgrounds

In full screen, so that you can get a good feel for how this looks Again, the bottom one is the OLED screen, and the top is the LCD screen And, here they are with the light AHH!!! the light! Let's go back You can see that the OLED screen is just slightly, just slightly more vibrant in the blue department

Overall, it kind of doesn't matter You're gonna have a longer lasting screen, an easier to replace battery, and well– Oh, one thing I wanted to note about the Vita– Oop! I really liked the Vita, but it never really had a chance to take off And this is kind of an odd thing that they did with the Vita They dropped the 3G stuff, which you could put a SIM card in this side, and there is this mystery slot right here That never got used for anything

It's actually a mystery thing I think it was for connecting it to a TV But that was never released Overall, if you're in the market for a Vita, it's easier to find the OLED ones, because they are more plentiful, but, it might be worth it to track down a Vita Slim, especially if you're a person who doesn't like the initial weight of the Vita As far as screen colors and contrast go You might just be better off with the Vita Slim But that's just my opinion They're both really good looking And they're really good looking screens They're really sharp

However, the OLED Vita, the way it's designed, you can't access that 1 GB of information Whereas, you can use it as a memory card on the Vita Slim Which was — hmm — kinda low, if you ask me

That Sony went ahead and did that But yeah, if you're in the market for a Vita, good luck finding one, and good luck trying to find a Slim one Cause they're a little bit tricky to find nowadays In fact, when I went and got this one from GameStop, they were telling me how they actually had not gotten a new Vita in in a while If you're looking for a Vita, you're gonna have to import it, really

but The Vita is region-free so It doesn't hurt to import one in The only thing that might be a little off-putting at first is thaton an import one, you agree to things by hitting the O buttonthe circle button, instead of the cross (X) buttonwhich you do, which is the opposite of the United States

But yeah If you're looking for a Vita, Don't feel bad about getting one of the slim ones You might be getting the better deal Also, check out that screen There's really Not too much of an issue or difference between the two of them It's actually very surprising Well, you can see slightly deeper black levels on the OLED one But, at the end of the day

You can get this one in all sorts of different colors So, what do you think? Which Vita would you want to pick up? The OLED one or the Slim with a slightly better battery life? I mean, two extra hours And more versatility in charging options

And, until the next video comes out You are now caught up I know a lot of people wanna send blankets or water