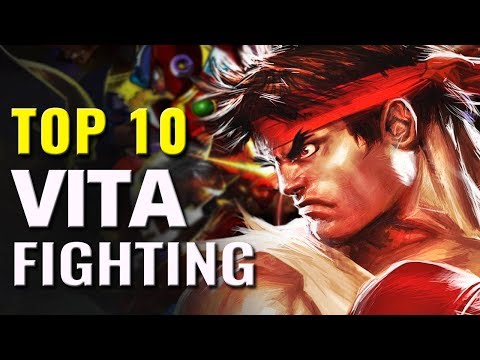 10 Opening our list of PS Vita Fighting Games is ONE PIECE: Burning Blood Heads up because the Straw Hat Crew is heading for high seas and itching for some trouble

A fighting game adaptation of the massively popular One Piece franchise, Bandai Namco welcomes you into a world of adrenaline pumping action with you favorite characters Developed by the visual novel designer Spike Chunsoft, this title is burning with the anime's compelling stories Experience the Marineford arcs once more, and see it from the differing perspectives of Luffy, Ace, Whitebeard, and Akainu As far as mechanics goes, each round is a no holds barred battle that matches up the pirate crew against each other Move freely around their 3D arenas and use their fighting skills and devil fruit abilities to claim the victory

Doused in cel-shaded artstyle, it feels as if it's been lifted straight off the pages of the manga Packed with gorgeous visuals and the over the top anime action we've come to love, it receives a PlayScore of 752 9 Real Boxing If over the top isn't your style, then this Unreal Engine powered simulation just might do the trick

As the title suggests, it aims for ultimate realism giving players a true experience in professional boxing Not only does it enhance immersion with stunning graphics for its time, Real Boxing takes it to the next level with deformation technology to exhibit the drastic effects of each powerful punch Become your own boxer, put on your boxing gloves, pave your own way through the boxing ranks in their inspiring story mode While it doesn't have the licensed boxers of other titles, Real Boxing gets you closer to the gore and excitement of the sport Unlike the mindless button mashing of other fighters, winning the rounds will require thinking and strategy

Complete the single player campaign, or climb the leaderboards in the online arena It has a PlayScore of 765 8 Street Fighter X Tekken One of Capcom's critically acclaimed crossovers, it joins two of the classic fighting franchises into one epic showdown

With each of them already established in their own right, the cast of Street Fighter joins forces with Bandai Namco's talented roster of pugilists and martial artists While it has a bigger focus on Street Fighter's gameplay mechanics, it's undoubtedly a combination the two franchise' best features, making it fresh and familiar for both of their fans Duke it out with its diverse mix of characters, and pit your Street Fighter favorites against their equal rivals Given their own counterparts, it's interesting to see the relationships between the stars of the two series as they take on amusing banter after each fight Released in 2012, it has been received positively by both critics and gamers, owing to their balanced cast and competitive mechanics

From Ryu and Ken, to Jin and Yoshimitsu–this game brings the best from both universes It has a PlayScore of 789 7 Arcana Heart 3: LOVE MAX!!!!! If you're tired of the sweaty, brutish mess of masculinity, then this just might be the refresher you need

From the same team that gave us BlazBlue, this third entry to the 2D fighting series will serve you with a delicious buffet of warring waifus It's a whole fiesta of fighting femmes who will stop at nothing to take the victory This title comes with 23 different characters to choose from Pair them up with 19 arcanas and blaze the stage with a flurry of magicka Experiment with different arcanas, and find the best combinations that suit your playstyle

Packed with bright and colorful visuals, full-screen super attacks, and varied character designs, there's definitely a lot to love about Arcana's third entry Play around in three brand new games modes, Story, Time Attack, and Trial, and restore the world to its true form It has a PlayScore of 797 6

Dengeki Bunko: Fighting Climax Another crossover fighting game From the other side of Capcom's coin, SEGA comes in with an all-star cast of popular characters from the Dengeki Bunko universe It's a title that celebrates the long history of the franchise, marking its 20th anniversary when it released in arcades back in 2014 Making shockwaves on the PS Vita, dive into action with each of their diverse fighters Set in the 2nd dimension, it follows similar mechanics to other arcade fighters, letting you choose characters along with an assist to aid in the battle

It's a wonderful port of a cult fighting game, with its collection of SEGA Themed locations that form the serene yet often equally intense backdrops to the square offs Perform stellar combos with Sword Art Online’s Asuna and Kirito, or with Valkyria Chronicle’s Selveria Bles With all that and more, it receives a PlayScore of 8 5 Ultimate Marvel vs

Capcom 3 When we're thinking about the best in crossover fighting games, Capcom's supersized fighting series is definitely up there An updated version of The Fate of the Two Worlds, it adds 12 new characters from the two franchises Go out in 3 versus 3 skirmishes with Doctor Strange, Iron Fist, Phoenix Wright, and so much more A lot similar to their previous title, the most apparent change in this third installment is its aerial combat and X-factor systems With these new updates, comes a more balanced fighting environment, offering new challenges for both their veteran and amateur players

It was part of the PS Vita's roster of launch titles, and was praised for its smooth transition to the portable–boasting stellar technical and graphical performance despite the obviousy limitations of the hardware With its expanded character roster, enhanced online and and a new visual flavour, it remains one of the Vita's best It has a PlayScore of 807 4

Mortal Kombat If there’s one thing Mortal Kombat achieved other than its fluid fighting mechanics, it’s the gore–the unbridled gruesomeness that seems to have won over fighting fans since time immemorial The series was never afraid to show off the brutality of death–whether it be from decapitation, freezing, stabbing, head-cracking, or impaling–Mortal Kombat has given us the satisfaction each and every time And, with this ninth installment, the legacy continues A title from the famed fighting game developer NetherRealm Studios, it pays tribute to the series' past–veering away from full 3D rendering, and opting for the more arcade friendly 25D

With the introduction of the super meter, Mortal Kombat opened new strategic angles as it charges with your every move Unleash lethal combos with Liu Kang, Kitana, and more, as you unravel the retconned story of Raiden and Shao Kahn Enjoy all the new costumes, and take on the Challenge Tower with its responsive touch screen controls It has a PlayScore of 809

3 J-Stars Victory Vs+ If you're looking for the absolute best in crossover fighting game, then you won't have to look farther than Bandai Namco's superstar-friendly fighting game Though it's not an established franchise, you'll need glitz and glamour of their diverse cast is enough of a selling point Combining the characters of the various universes of the Shonen Jump series, it gathers around a star-studded roster that will make manga fans squeal with absolute joy See legendary manga icons like Goku, Naruto, and Luffy compete in each, explosive matchup

Let the sparks, shurikens, and kamehamehas fly out with Spike Chunsoft's specially designed mechanics Despite the different artstyles of each manga, they all look translate beautifully into the unfamiliar 3D world Perform jaw-dropping supermoves and move to the beat of their heart-thumping soundtrack It has a PlayScore of 809

2 Dead or Alive 5 Plus Team Ninja has taken the world by storm since the release of this fighting franchise back in 1996 More than ten years after, it remains a staple in the genre, at least for their loyal fanbase on the PS Vita Taken at its face value, it's described as one of the hottest fighting game titles, owing to their stunning collection of feisty and undeniably busty femme fatales But, more than that, the game has also been described as one of the most balanced fighters in the market, moving smoothly into the portable console with little to no technical snags

Not to downplay their models and anatomical physics though, because it also happens to be one of the best in the business Dive into the button mashing action with their polished gameplay mechanics, admire the detail of their smooth combat animations, and claim strategic wins using perfectly timed counters Whether it’s fight or fanservice, Dead or Alive 5 is willing to deliver It has a PlayScore of 847

Here are the runners-up before we reveal the number one: 11 Injustice: Gods Among Us – Ultimate Edition Already a knockout title, it only gets better with the addition of enhanced visuals and all the available DLCs Making superhero brawls into reality, it has a PlayScore of 745

12 Mobile Suit Gundam: Extreme Vs Force A spin off of the Extreme Vs made portable for fans of mobile suit battles Bring out your squad in this tour de force of Gundam action

It has a PlayScore of 74 13 PlayStation All-Stars Battle Royale Taking notes from Super Smash Bros, it gathers round beloved PlayStation characters into the ultimate digital skirmish

The fifth version of the X2 title, it's been praised for its excellent balance, marking the rework of two in-game bosses It has a PlayScore of 702 1 And the best fighting game on the PS Vita is BlazBlue: Chrono Phantasma Following closely in the footsteps of Continuum Shift, this third installment of the Blazblue series continues the legacy of Arc System Works acclaimed fighting series

It's one of the most prominent titles in the series, with its success giving birth to an extended version that adds a brand new story and new characters into the mix Chrono Phantasma keeps the series' wheel of fate turning as it introduces a wave of fresh new faces along with its already popular cast All in all, it has over 28 playable characters, with each of them packing unique skills and movesets that divert the course of fate Adding even more spice to its trademark fighting experience is a new mechanic called Overdrive that replaces Continuum Shift's Gold Burst and gives you the power to stop time While it might not be the best place to start the series, Chrono Phantasma is still a great title overall with its overhauled fighting mechanics, exciting new content, and engaging story