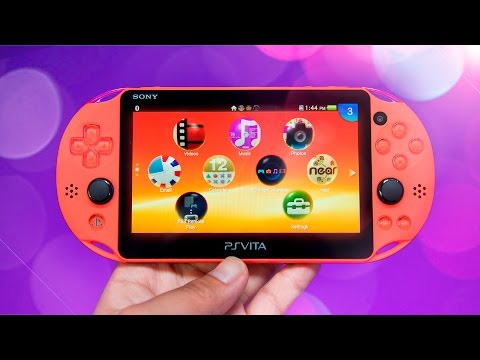 – Hey guys, this is Austin! This is a PlayStation Vita and against all odds it still exists in 2017, but why? So let's take a look to see what you get if you buy one of these today Now this is a Japanese-model Vita

However, it doesn't really matter since they are all region free and plus, you know, it helps that Japan gets all the cool colors anyway So this is the newer 2000 model of the Vita and because of that it has a few different tweaks including a giant power cable? It also comes with a Micro-USB cable as the original Vita came with this weird proprietary Sony charger, whereas this guy should work with basically anything What I really wanted to see though is the Vita itself, and that is orange Wow! That's, when they say "Neon Orange" they are not kidding (laughs) So in the United States, they pretty much only sold the Vita in black

I know there were some white special editions, but the orange actually looks pretty cool I have to admit For a console that came out in 2012, the Vita actually has some pretty cool features and one of the biggest one was the five-inch touchscreen, which definitely was a huge upgrade over something like the 3DS from the time It also had a revolutionary feature of dual analog sticks That might not sound impressive today, but compared to its predecessor, the PSP, which only had a single analog stick, this brought the Vita much more in line with what you'd expect out of a portable PlayStation

It actually has aged pretty well So it kind of looks like a smartphone in that you can scroll through your different pages, swipe over to get your multi-tasking, kinda just swipe it away if you don't want it anymore It's actually a pretty slick way of doing things You get basically everything you would expect to see here So not only is there the web browser and the PlayStation Store, but you can also do things like activate the camera, and while the cameras are maybe not the most amazing thing in the world, They are kind of usable

This may not seem like the best front-facing camera in the world, but it's useful for more than just a quick selfie So the PlayStation Vita supported AR games and it was kinda ahead of its time in a lot of ways So sure, today things like Pokemon Go are completely standard, but back then having something like that that could run on a portable like the PS Vita was kinda cool Inside, the Vita actually had pretty decent specs for its day So it has a Quad-Core ARM A9 processor, 512 megabytes of memory and a five-inch display with a resolution of 960 by 544

The only downside was the screen was actually a slight downgrade from the original Vita model which came with an OLED display compared to IPS on the newer 2000 models Now there are other advantages such as this is smaller, comes in more colors, has that Micro-USB port but as far as pure screen quality goes, the original model was actually better Compared to the 3DS though, the Vita actually had a huge technical advantage Not only was it much much faster, but it had a far better screen and even though it was the better console in a lot of ways, it did not sell anywhere near as well, With the Vita topping out at around 15 million sales, whereas the 3DS has sold over 65 million units and counting Now there were a lot of reasons for this, one of the big ones being of course that the game library was much stronger on the 3DS, but we'll talk a little bit more about that in a second

But Sony also made some very questionable decisions with the Vita One of the biggest problems with the Vita was the pricing on the memory You were forced to buy proprietary PS Vita Memory Cards which were really expensive We're talking well over $100 for a 64 gigabyte card, but the biggest problem with the PS Vita today is simply the fact that smartphones exist In a world where basically everyone has one of these in their pockets, having a dedicated game console to carry around just doesn't make as much sense as it used to

Now sure, there are definitely a lot of games on the Vita that are higher quality than what you can find on Android or IOS, but the fact remains that there are a lot of very good, very easy-to-play games on a device that you are already carrying It really does make something like this a much harder sell The Vita is in a weird spot in 2017 So it's technically not dead You can still buy these brand new today

However, Sony's support for it has definitely been dwindling, as things like PlayStation Now are currently in the middle of being phased out However, the important part with any game console are the games The Vita was by far the biggest success in Japan but there were are fair few games that were released here in the west such as Tearaway However, odds are, if you are playing a Vita in 2017 you are going to be playing some of these And if your name is Ken Bolido, you are definitely playing this one

(upbeat game music) What am I supposed to do there? If you are not in waifu land though, there are other games such as Tearaway and I think this is one of the best examples of a game that really does a good job of taking advantage of both the rear touch pad as well as the touch screen This is really cool, so the ability to actually use that touch pad in a way that's not just gimmicky, right? This does a great job of showing off the potential of the Vita but, unless you are really hardcore about the games that are available for it, it just doesn't make sense I think the Switch has shown that there is still plenty of interest in a portable console but in 2017 the Vita is definitely a hard sell But what do you guys think? Let me know in the comments below and I will catch you on the next one