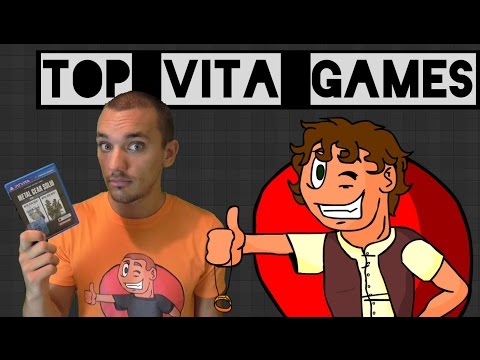 But I don't want to justify my baby here or defend it I just want to show you my games and select my personal top 10 Let's go and have fun! Ten! LEGO games Jaja, here we have almost as many prejudices as for the Vita itself and granted, LEGO Lord of the Rings is pure crap On the other hand, LEGO Batman is really good I spent lots of entertaining hours with the 2nd and 3rd part of the series on my handheld and reached 100% with both

Neither gameplay nor difficulty are very demanding, but the different skills, the brick collecting and the LEGO humour are well-made Apart from the possibility to play more than 100 DC characters! Nine! JRPGs and J-Games Now I sum up all the games that didn't make it themselves into this list, but it would be wrong to skip them The Vita is THE JRPG console Granted, you can find lots of trash here and lots of semi-trash, but most of the games also have their good sides and all have in common that you get lots of play time for your money

To name just a few examples: Akiba's Trip, Conception, Deception, and if you look internationally even more Eight! To pick up on one of these JRPGs: Disgaea 3 rocks! Typically crazy Japanese story with very freaky but likeable characters and a great and challenging strategy gameplay It plays like a Fire Emblem or Project X Zone, but is way more complex and challenging – sometimes maybe a little bit too hard Unlike the sequel everything is fair and doesn't need hours of bothersome grinding Seven! Gravity Rush! One of the unfortunately few Vita exclusives, but a good one with very cool gameplay

Like the title says, we override the forces of gravity and shift them everywhere where the feet of our protagonist are right now And that's pretty nice in an open world game Granted, especially in fights where you have to use those abilities, it can get a little confusing and one loses the feeling for recognizing up and down A second part would've become way cooler, but as far as I know it was cancelled (Note: It was released 2017 only for PS4) Either way, there are lots of sidequests and challenges to keep you entertained for a long time Six! Another exclusive title and one with especially many prejudices: Killzone Mercenary An ego shooter on a handheld? Oh my god! But it works and like everywhere else it's a question of practice

I rarely had a problem with killing my enemies with an aimed headshot and with later unlocked weapons, which let the heads explode, it's a fun gore feast Like in other Killzones the story is trivial and short and you fight waves and waves of enemies But there are several difficulties, unlockable weapon upgrades and an online multiplayer – which probably nobody plays Five! PS+ and download titles Again I have to sum up but the games in itself don't have what it takes to make the top10 This comes mainly from the short playtime but they are definitely worth mentioning and summed-up they cracked the 100 hours playtime Of course there's lot of crap here, like Murasaki Baby, Lone Survivor or the Hungry Horde, which gets uninstalled right away but there are equally solid average games and really fun time-consumer To name a few: The motivating Titan Attacks, the charming Tales From Space or the genious Oddworld: New 'n Tasty

There are countless creative puzzle games, like Kick & Fennick, Smart as, Lumines, the great Velocity games or the free Treasures of Montezuma Blitz Or challenging dexterity games like Binding of Isaac, Race the Sun, Hotline Miami, Spelunky, OlliOlli or the real satisfaying and crazy Touch my Katamari And there is something new every month Four! Same prejudice as with Killzone: A shooter on a handheld – how is this supposed to work? Exactly like this Not only does the gameplay of Uncharted Golden Abyss work great, it catches the charme of the main series and can easily keep up with it

I, at least, put it on the same level and like it as much or even more than the third part Other than that it's an Uncharted Imaginative Indiana Jones and Tomb Raider settings filled with countless enemies to shoot, lots of hidden treasures and likeable characters with lots of wit The 100% here show that the gameplay also works on the hard difficulties and that it's a really captivating game Top3! Here we are already and with a game that really surprised me – but which is also a matter of taste

The Danganronpa games are visual novels, so you have to read a lot, because everything is built on the dialogues But this isn't very bothersome, because the characters are as unique as they are mysterious and the story is told unbelievably exciting As already stated in my review for the second game we also get a good portion Phoenix Wright, because periodically someone dies, a crime scene has to be investigated, witnesses must be questioned and in the end a suspect must be convicted The cherry on the cream is antagonist Monokuma with his genious Joker-like humour Also the playtime runs towards the one of a JRPG Two! I really had to fight myself because this is by far my most precious Vita game, but for my peace of mind I just had to leave number one for something else

Either way, Persona 4 Golden is a complete winner It was my entry point into the series and became in only a few hours my maybe favourite JRPG of all time The succesful fusion of real-life and fantasy, the passing days and the daily highschool life, which one has to master with all its challenges like tests and innocent romances, before entering the dangerous dungeouns again Those especially are very monotonous and boring, but I really love the turn-based fighting system but even this flaw drowns in the sea of awesomeness which is the rest of the game Just for this one game the Vita was already worthwhile

By the way, you can also download the two prequels and other classics on your Vita, which I intend to do in the near future For several years now already the Vita is my favourite console and I have way more games in my list than fit into this list right here Even if this LorD of the Ranks was supposed to be a collection video, too, I just can't mention every single one But some have earned it definitely WipEout 2048 looks like the bomb

Just like Batman Arkham Origins Blackgate, which was just a little bit too confusing The Metal Gear Collection works just as well on this console and looks very nice I personally didn't like the style of Tearaway, but it's definitely the game that uses the Vita features the best There's Minecraft and also Michael Jackson The Experience HD which you won't believe me, but is very good and made a lot of fun Nonetheless, there can only be one Respectively two so far One! Rayman! Origins and Legends, both genius games

Doesn't matter which platform but I had nowhere as much fun with it as on the Vita The flawless gameplay, diversified levels with great soundtrack, exciting boss fights and the exact amount of motivating challenge without being frustrating The new Rayman games are simply perfect and that's exactly why there is no other game that can stand here on this position Congratulations old limbless friend! I forgot Final Fantasy, didn't I? Final Fantasy X How could I forget this? So part 10 shares its position now with

Uncharted fourth place To be honest, I'm a bit surprised myself right now but apparently it's not as good or differently good than Persona 4 Golden And Danganronpa sweeped me off my feet because it was something completely different

Either way, Final Fantasy X is a classic with great characters and a great fighting system, which makes it still the best game in the series for me So – now we're really through What are your Vita favourites? Write it into the comments, even if I just dropped Final Fantasy X By accident of course! May the LorD, that's me, be with you Cya!