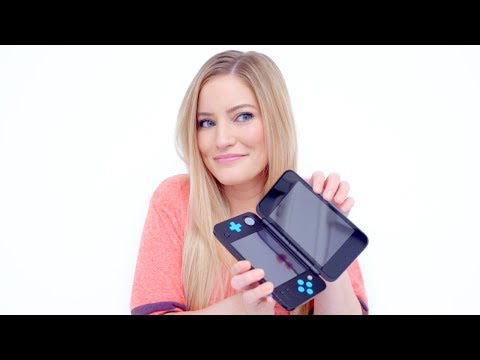 I'd be interested to see which you guys think about that in the comments below But in the meantime let's open this up and let's take a look I'm also so excited about the Pikmin amiibo I may or may not do a little bit of gameplay for you but I don't know how to capture from a 3DS, 2DS I never even played in 3D does anybody actually ever really play in 3d on their 3DS? Stop talking open up I'm shook They have a charger with it That was like the biggest dilemma in the past 3DS

you have to buy the charger separate Can you even? I can't I like the blue a lot too this looks so good Here it is Got our charging port back here Our stylus Headphone jack Why is there a big slot, I always did the digital downloads

And I'm so used to seeing the tiny tiny little Cards for the Nintendo Switch So let's do a size comparison between 3DS This is probably my favorite version other than the galaxy 3DSXL This is a gamestop NES exclusive my mom bought me this for Christmas I believe I was so excited about it It's really not that much smaller to be honest with you the 3DSXL is a little bit taller You shoulda been a baller shot caller When you open it up, it has a much smoother feel This has like the click So as for like a screen size comparison, the screen looks almost the same size

So basically the 2DSf fits quite nicely into the 3DS Let's take a little peek in comparison to the Nintendo Switch Look at you, you look good Got our Nintendo Switch, got our 2DS, which basically fits Quite nicely there in the middle of the screen What is so intriguing to me Is I really forgot how big these cards were I mean in comparison to the Switch cartridges You know something I never did I never did taste the cartridge I don't want to do it I don't want to do it I'm scared should I Like what's the bad side? Oh God Oh my God How did I not do that until now how have I? Not tasted the Nintendo Swish cartridge for the five months that this thing been *gags* Oh my God

It tastes like a freaking it tastes so disgusting I really should have just trusted the internet Thanksfully i didn't get a good lick of it, and I've been drinking this Oh my God the taste is still in my freakin tongue I'm such an idiot

I'm so stupid I told myself I was not going to taste the frickin cartridge never say never who said that Justin Bieber Let's take a peek at these little amiibo Oh, smells so, like, just Beautiful plastic There's so much detail in this thing, like look at the grass So that's that The Nintendo Switch cartridge does in fact taste disgusting The 2DSXL is much smaller than the 3DSXL but not by that much I'll see you guys later

Thanks for watching, bye