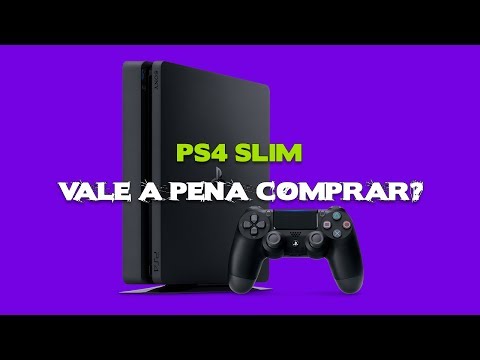 And then beauty gamer? Here is Mario, welcome to this video Personally, today we are going to talk about the PS4 Slim

Specifications, settings, whether it really worth it or not worth buying one Check out the video So let's go guys PS4 Slim Today the PS4 Slim has been officially marketed by Sony here in Brazil since December 2016 This is very good, you can have a direct warranty from the manufacturer that makes all the difference

Weight of the PS4 Slim, the PS4 Slim weighs 40% less than the PS4 Pro, for example, it is weighing 21 kg, so it is very light compared to both the first version and now the last version which is the PS4 Pro, so it's a slightly lighter handset Your memory, the memory has not changed is the same, 8 Gb DDR 5 Amount of storage, storage capacity, storage capacity is the same as the standard 500 Gb model because today we have both some models that came out of the previous model, the classic first came out 1 TB as the Pro 1 TB So the PS4 Slim today has 500 GB, but you can also be expanded space, you may be using external HD, so this is relative, you may be expanding

An interesting point is the consumption of energy, in case his father, his wife gets too much on his foot because the device gets too attached, the PS4 Slim has an advantage, it compared to the previous model it has a consumption reduction of almost 35% and compared to PS4 Pro, it has a 40% lower consumption, so we can say that it is a device there in the case of very economic energy The negative point of the apparatus was that they removed the optical cable port, I practically use the optical cable port, to achieve a much better sound truth improvement Nowadays there are many better headsets that already use this type of cable there is a certain time and most Home Theaters, do not know if you use something Home Theater there, has optical cable entry So whenever you can be using an optical cable to audio, and unfortunately the model of the PS4 Slim came without optical cable input, so For me it's something that made a big dent Well now seen all technical information, all this data, now that question, What situation would be worth buying the appliance and in what situation is not worth Shame on me to buy the PS4 Slim

Let's try to do it then I think it would be worth you to buy the device if by chance you are a person who is concerned about saving electricity, his mother fights a lot with you, Ours you have a PS4 there, a classicão there and or else you have an old model of the old generation, your mother will be speaking: "our but how it consumes energy this apparatus, increased both the account ", you are a guy who is trying to reduce a little, I think the PS4 Slim it consumes little energy if I do not mistake the peak peak today in watts there is around 165w From what I remember the data I came to see from the device So it has a low power consumption compared to for example the PS4 Pro that arrives almost 350w is almost double the consumption of PS4 Slim, I think it would be worth you buy the PS4 Slim Another thing I think may be worth your while buying the PS4 Slim, is if you do not It connects a lot to this 4K graphics business, as you may know the PS4 already exists Pro that runs some games in 4K, upscale there to 4K, runs at 60 Fps, if these things for you are not important, you are a person who is there to play a tranquil game in a casual, one thing you do not care much about graphics

I think it's worth getting a PS4 Slim I think is feasible understood, in case of saving on viable electricity In case you do not care much for this chart business and such, you just want play the new releases there played a Crash that just quit or play Uncharted the new I think it's cool to buy a PS4 Slim there, you'll be quiet will be playing all the games of the generation and will not be spending so much Another situation, for example, is, "Well, I want to buy a PS4 and I do not I have the condition to buy a PS4 Pro ", then I think it's worth you to buy a PS4 Slim, is feasible, you will not spend anything anything there, today the values ​​of PS4 Pro is about two thousand reais, you pay one thousand and one hundred, one thousand and two hundred in a PS4 Slim is a difference of R $ 800 is almost half the value and nothing nothing there making an account here fast, a dumb bill, the 45% there reduction of the amount you are paying, so it's worth it That's the circumstances I think it would be worth you to get the PS4 Slim

In the circumstances now that I think it would not be worth it you get the PS4 Slim First thing, you're a guy who cares about sound, I'm starting with the basics, you're a guy who cares about sound and you want a sound quality up there, top, everything, uses the home theater, uses a nice headset, pow, the guys me they take the optical cable door off the device, for me they have already lost it I'd rather, I! My opinion in this case in terms of sound I much prefer the older model than Slim If I were today, I, if I were to buy today in my situation, I have to buy a PS4 pro, I have no condition to buy, I do not want to know graphics any of this, I want to buy the PS4 Pro, I was going to buy the old one, just because of the optical cable, because For me the sound experience of the game is very important, opt either for the old model or go pro PS4 Pro

Another important point, you are a guy there who likes great graphics, drop to play at 60 Fps or want a larger amount of frames, have to go pro PS4 Pro, can not buy a PS4 Slim, then you will be there all crazy to want to buy a PS4 Pro and say: "Wow, I spent a lot, I bought a PS4 Slim" Another situation, you are a guy who has condition, has a little bit more money and such, will buy a PS4 Pro, so that's going to buy a PS4 Slim, today I think so, the PS4 Slim, are few circumstances worth buying it, perhaps most of the players are casual players, if your case is a casual player, as I mentioned before, then maybe it's worth a PS4 Slim, if you like to play a Fifa, you're a face that plays from time to time, does not care much for the graph Today it is in an affordable value, R $ 1,100 R $ 1,200 is a considerable money in Brazil, but close to what we have seen the consoles of this generation, there at the beginning almost R $ 2,500 the PS4 Pro is $ 2,000, $ 2,200, we talk at $ 2,200 is a little more value accessible So it's worth it in that case, you want to save energy, the situation in Brazil It's not very good Apart from this circumstance and starting with the optical cable, today I would not opt ​​for a PS4 Slim

Good people, that's it I hope you have enjoyed the video, I have done a summary here an analysis of the PS4 Slim today, in the fan of Sony we have three models of PS4 The normal PS4, the classicon the classic, PS4 Slim and the PS4 Pro So there is in some circumstances yes that the PS4 Slim can serve, sometimes you is a casual player he fits very well I hope you enjoyed the video, do not forget to subscribe to the channel we are starting there we are trying to bring great content

Give a Like in this video if you like mark the notifications and share with your friends ok? Many thanks a big hug and thanks, until the next personal video