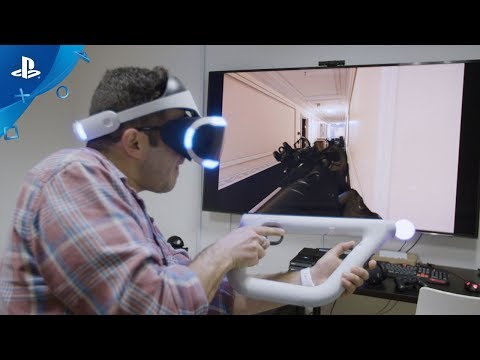 Detecting hostiles DAMOUN SHABESTARI: My favorite thing about Firewall is that it's VR

It is completely brand new and it also is just 100 percent immersive VR brings an added element of physicality so there's no pressing a button and looking down your scope; it's you physically bringing up your weapon, aiming down the sights And you can blind fire So that means you can aim around a corner physically and fire your weapon JOSHUA OCHOA: You can absolutely use your weapon as a proxy to motion and signal your team of "I'm going this way" or "stop

" We actually do that in gameplay DAMOUN SHABESTARI: The PS Aim brings an added VR immersion level that's just unprecedented It's super physical and everything feels real So when you turn your gun, when you turn the Aim, they're both doing the same thing You are that character

JOSHUA OCHOA: The wrist tablet serves as your minimap But we're now in VR, so instead of having it on a screen in front of you, you have it physicalized in virtual reality right in front of your face as if it were your own arms It's something like I've never experienced before, and it's something that's very special to Firewall Zero Hour DAMOUN SHABESTARI: Directional audio adds a whole other layer of immersion If someone's yelling at you from the right side, you hear it from the right side

If they're behind you and they need to get revived, you know it just from the direction of the audio coming out of that character You can tell where gunshots come from So if it's coming from a distance, you can call it out "I'm hearing gunshots from the far end of the corner of the map" HESS BARBER: When VR came around we didn't really realize how effective it could be, then as we started to experiment and get into it, we kind of clicked

And then adding the multiplayer aspect of that and the communication, it just made this magic thing happen which we'd never experienced in games before PLAYER: All right I'm going to get the laptop Cover me