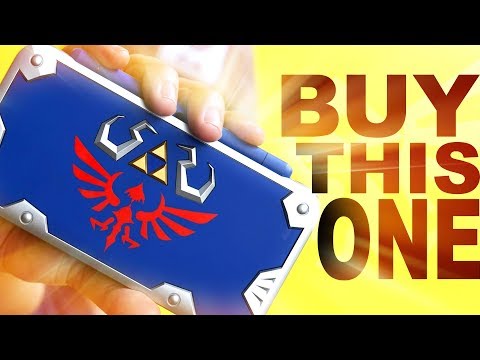 (chill electronic music) – You'd think by now that Nintendo would be done putting out new 3DS's, and you would be wrong because Nintendo has now just released another special edition 2DS XL They cannot get over this idea, and the newest one is this Hylian Shield design right here

Now, why are they releasing this one? I don't know, there's actually no special occasion whatsoever This is not an anniversary This is not a game coming out They kind of announced it in line with kinda leading up to E3 That's kind of a set up, I guess, but it really just seems kinda like a for the heck of it design

Nintendo wanted to release a special edition Zelda 2DS XL, and I'm for it because this is a really good looking 2DS Nintendo has been really upping their special editions lately when it comes to the DS line, at least I mean, last year we got the Pokeball, which looked great More recently, we got the Pikachu, and this is definitely going up there with one of the better designs Let's kinda take a look at this guy

So this is based on the Hylian Shield from the Zelda franchise One of the more kinda recurring items across it, and the quality in this guy is really nice, not just because of how they have like the design and how just clean it looks, but you can easily even see here that with all the metal bits, well, you know, metal All the steel design looking parts actually do have this kind of metallic sheen to them, which gives a really cool kinda color design to this whole thing Personally, I really love the overall color aesthetic of this, I think the kinda steel silver look they have on the outside matching with the blue and just a little bit of red and gold looks really nice The only part of this that looks a little off putting to me is they also have a couple random brown accents

It's on the shoulder triggers and also the power button I think the logic here is that, in some depictions, the Hylian Shield does have like a wooden back behind all the steel so that's where that brown's coming into play But it kinda seems like an unnecessary additional color I think you could've kept those just being same kinda blue as all the accent going on here, and it would've looked better But it doesn't ruin the overall thing, and then the top aesthetic here is awesome

On the inside, we're still focusing on that blue and gray We're not using the metallic sheen of the steel, but you're getting that kind of lighter gray on the buttons, darker, traditional gray on the sticks and then, that navy, dark blue right here, which looks really nice You know, overall, with its color choices and that metallic finish on the silver and gold parts, I gotta say, this is easily one of the best looking 2DS XL's they've released I'm kinda debating in my head right now whether I like this or the Pokeball more I really like the kinda just concept of the Pokeball 2DS, but this one's just overall look and feel is fantastic

Something about this system I really like too is that this is kind of a sign of a recent trend Nintendo's been doing with special editions where they have very specific themes in mind 'cause there have been a lot of Zelda special edition systems in the past I mean, it's probably the highest number alongside with Pokemon, and normally, there's kind of this default idea of black and gold Use gold trim in places, you have the Tri-Force Just a very sort of generic approach that's kind of just Zelda, overall, whereas this one there's a very clear specific theme in mind, which is recapturing the design of the Hylian Shield And that's part of what really works well for it, I think, just 'cause it gives you this kind of idea of a specific item

You know 'cause the Hylian Shield is a very recurring item in Zelda history It first made its appearance in Ocarina of Time where it's one of the kind of the first games that you can actually see an in-depth look at Link and what he's using They did have a previous kind of concept art design in Link to the Past that looks similar, but Ocarina of Time is really where this kind of overall aesthetic was solidified And we've seen it in basically every 3D Zelda game that has an adult Link, along with one appearance in a 2D game, which is A Link Between Worlds, the game this happens to be bundled with So that works out really well

Now, the exact design of the Hylian Shield has varied a little bit game to game, but the general aesthetic is all here You have the steel outline for the shield itself, little metal accents, and the two most important symbols are this Tri-Force right here up top, which is, you know, one of the biggest symbols from the series And below that, you have the Hylian crest, which in Ocarina of Time, it was kinda just a design they threw together and they were like, "Yeah, that's what the royal family crest looks like" And then, later games of the series, Skyward Sword specifically, they gave it a little more meaning by saying that this is kind of a fusion of two other symbols, the Goddess crest, which was in that game, and it's based on the red loftwing that you would ride in Skyward Sword and kinda formed the basis of what this design looks like Now, this did start in Ocarina of Time

They did not use it in any of the older games There was one like I said that was kinda similar in Link to the Past, but that only showed up in concept art In the game, you just saw that you had a blue shield, not exactly descriptive And before even that, in older Zelda games, you, too, can even see on our pixel pal right here, they actually featured a design that had a cross symbol, which, of course, they kinda removed that over time for pretty obvious reasons, removing religion from the game and focusing on instead on more just the hardcore fantasy elements And what was really interesting about this system to me is kinda what I was saying earlier that you would think they'd kinda be done with DS's by now, especially with how successful Switch has been and how, yeah, there's still some 3DS launches happening, but it's definitely starting to get near the end of its life cycle

But at the same time, it's kind of smart, really I think, Nintendo's really relying on this idea that if you make a cool enough looking special edition, like this guy right here, you're gonna have die hard fans that still wanna grab one And you're gonna have those people who didn't necessarily own a DS, got in on the Switch, fell in love with some games, like for instance, Breath of the Wild, and then, they a design like this, see it's a cheaper system, and maybe they wanna tap into that kind of larger, older library, especially because this one does come bundled with one of the best Zelda games, in my opinion, A Link Between Worlds, which, you know, is a pretty old game now It came out back in 2013, but it is an excellent 3DS title, and anyone that's a fan of Zelda should definitely try that one out So this is just a cool, little way of celebrating that franchise