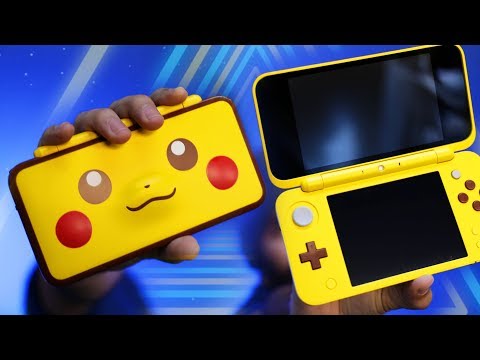 – Late last year we got one of the coolest 2DS XL Special Editions in the form of this Pokeball right here But at the same time in Japan, they got not only this design, but a special Pikachu design as well that we did not get until now

Which you can actually see right away, with the box, is a super awesome design that just immediately tells you, well, what you're getting Now let's open this things up and check it out in person Now because this is a 2DS XL, we do get an AC adaptor, thankfully Oh yeah, look at this cute little guy Look at that

You know, there have been plenty of Pikachu themed things before, I mean, basically any Pokemon thing always has Pikachu plastered somewhere on it, but I gotta say that the approach with this design where it's just his face is the whole DS is pretty ridiculously cute Like I actually really like this Something about this one and the Pokeball that's really cool is how Nintendo kind of went the extra step and it's not just a design, but they actually did different molding Like I don't know if this would very comfortably fit like a case for a 2DS, but you actually have like, wow, actually, look, the cheeks and the kind of nose area are uplifted Little bulge here, you can boop his nose

That's, come on, that is ridiculously adorable That's stupid I really like this Now let's check out how it looks So you've got a brown border around here, along with the face, brown buttons up top, let's check out the inside

It's really weird, because I know this is Pikachu, obviously it's Pikachu, but when you look at the inside without any other context, it's almost more Donkey Kong ♪ He's the leader of the bunch ♪ ♪ You know him ♪ – Because it's brown with yellow for like bananas There's not really a whole lot of Pokemon feeling on the inside, but obviously, I mean, that's, yeah, still, that's ridiculously cute You know, I gotta say personally, I do think I like the Pokeball one a little more, like I've said before, there have been so many different Pikachu things before that the Pokeball's just a nice more neutral note, especially if Pikachu's not your favorite Pokemon, but if he is, this is a pretty undeniably cool design Now real quick, something that we did find, while kind of getting prepped for this video, like I said, Nintendo has done a ton of Pikachu themed stuff

And if you love Pikachu, but you don't feel like spending all your money on buying a whole nother 2DS XL all over again, they have made lots of cool cases for the regular 2DS XL I think it works really well with this white one in particular Let's go ahead and get this snapped on Look at that You even get a little full body Pikachu just hanging out

Sitting down That's actually really nice looking So yeah, if you like Pikachu, and you don't want to spend money on a whole nother system, this is actually a really cool alternate way to go that I'll link down below for you guys to check out as well I think it works really well with the white, but since it has this kind of metallic sheen to it, totally work on the black and blue as well Now if you're wondering why we suddenly got this Pikachu edition now instead of back when the Pokeball came out, there's actually not that great of a reason just yet

But Nintendo did kind of tie this together with a couple of announcements of things all at once This has been released on the same day that Pokemon Crystal has now come to the Nintendo eShop, and when they announced that this was finally coming to the US, it was announced alongside the fact that we're also getting Detective Pikachu, – Your mother is a dirty, dirty, – Later this year in March, along with that ridiculous, slightly oversized Amiibo of him So yeah, not like super high synergy for its release date, but there is some synernatic reasons why we're getting it now It is a little incredible though how he stares at you (creepy music) – [Pikachu] Pika Pika!