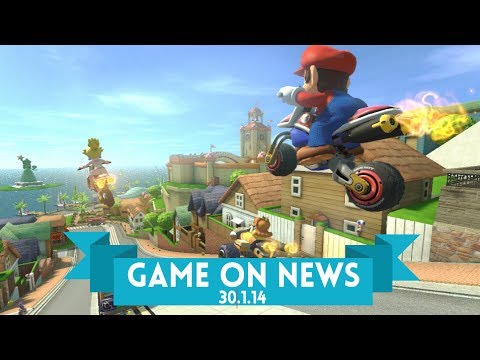 Hey guys! This is Game On, I'm Grace and I'm going to be bringing you the gaming news of the day First up, the white Xbox One has reportedly been confirmed by Microsoft to be released at some point this year

You've probably seen the white edition before as it does exist, but only for Microsoft employees Not only could the white one be making its way to you soon but there's word of a possible limited edition Titanfall console too Along with these rumour bombs there's also word of a major dashboard update in March and Xbox One's being released without the Blu-ray drive We'll keep you updated! Next up earlier this week it looked like Sony would be revealing some PS Vita Slim news and they bloody have aswell Sony has confirmed that the PS Vita Slim will be coming to the UK on February 7th and will sell for an estimated retail price of £180

The PCH-2000 series is a redesigned system coming in at 15 percent lighter, 20 percent slimmer and has a lovely HD 5 inch LCD screen Finally I thought I'd throw together a few bits of Nintendo news for you as it was revealed that President Iwata would be taking a voluntary 50% pay cut due to depleting profits and revenues A reported 24 million Wii U consoles were sold in nine months which is less than Sony and Microsoft sold in just six weeks but in lighter news Nintendo have revealed they will be launching Mario Kart 8 on the Wii U in May with new elements such as anti-gravity Also, just quickly before you go I mentioned earlier this week about EVE Online's biggest battle ever

If you wanted to check out the official recap with pictures, footage, graphs and more I've stuck a link in the description below Thanks for watching Game On News, we're back daily Monday to Friday so subscribe, til next time