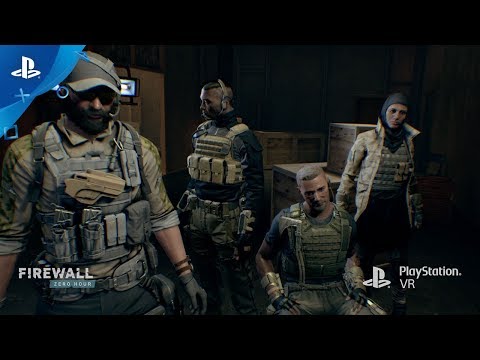 Watch out Left side

JOSHUA OCHOA: Firewall Zero Hour is a strategic multiplayer, first-person shooter PLAYER: All right Let's get into position for breech JOSHUA OCHOA: It's exclusive to PSVR, and it's incredible HESS BARBER: The objectives in the game is you're either on an attacking team or a defending team

The objectives are as an attacker to infiltrate and steal sensitive information FATHER: Data transfer online HESS BARBER: And as a defender, your job is to protect that information from the attackers DAMOUN SHABESTARI: In Firewall Zero Hour, you can choose from assault rifles, shotguns, sidearms and SMGs You can also equip yourself with grenades, flash bangs, signal jammer, mines, and C4, all sorts of different equipment that can help you reach your objective

When a friendly goes down, you want to get to him as soon as you possibly can Running up to them, physically looking down and pressing the interact button to get them back up and into the fight But we also have a revive pistol So you can actually revive your friendlies from afar ADAM ORTH: Contract handlers are two anonymous, eye-in-the-sky characters in the game that hire you to complete the objectives

MOTHER: You know the drill Beach the firewall via access point ADAM ORTH: We refer to them as "mother" and "father" FATHER: Contract fulfilled Initiating payments via encrypted transfer

HESS BARBER: The characters are not all from one military group They are contractors Each character has their own training from their own background, which I thought was pretty cool Instead of just going straight to the military thing which everybody does, we wanted to put a bit more human feeling to it One of our characters is a poacher hunter

Her entire life is devoted to tracking down poachers and protecting animals DAMOUN SHABESTARI: We have Akoro He is a very brute force guy from Angola We have Skip Skip's from Australia

He's one of our favorite characters here HESS BARBER: People can relate to those characters as well where people start playing a certain character because they relate to their backstory ADAM ORTH: Everyone can jump in and play Firewall You don't have to be a hardcore shooter-player It's really made this game for everyone to have that feeling