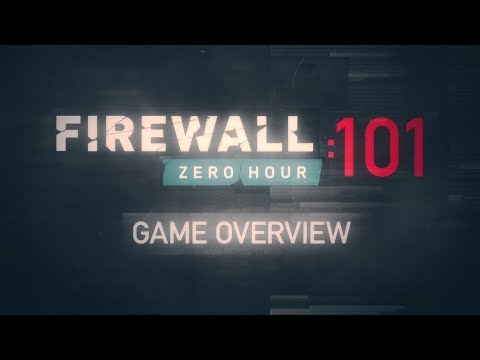 Warning On the left

JOSHUA OCHOA: Zero Hour Firewall is a strategic shooter first-person for many players PLAYER: It's alright Let's get ready to break in JOSHUA OCHOA: It's only available on PS VR and it's unbelievable HESS BARBER: The goal in the game is different, depending on are we in the attacking or defending team? The target of the attacking team is to infiltrate and take over sensitive data

FATHER: I start data transfer HESS BARBER: The goal of the defenders is protection these data from attackers DAMOUN SHABESTARI: In Firewall Zero Hour, we can choose weapons: assault rifles, shotguns, pistols and submachine guns You can also use grenades, grenade grenades, signal disrupter, min and C4, different types of equipment, who can help you achieve each goal When the ally is knocked down, it's best to get to him as soon as possible

You have to run to it, physically look down and press the interaction button so he can return to the fight We also have a resurrection pistol So we can raise our comrades from a distance ADAM ORTH: Leading agents are two anonymous characters in the game, supervising everything in advance and renting you to pass goals MOTHER: You know the rules

Break into the firewall through the access point ADAM ORTH: We say "mother" and "father" on them FATHER: The contract is completed We start payment with an encrypted transfer HESS BARBER: Characters do not come from one military formation

They are mercenaries on commission Each character received training depending on the origin, I think it's quite interesting Instead of choosing a purely military motif, like others, we wanted our agents to be more human One of our characters hunts for poachers She devoted all her life to tracking them and protection of animals

DAMOUN SHABESTARI: There is also Akoro He is a powerful brutal from Angola And Skip Skip is from Australia This is one of our favorite characters

HESS BARBER: People can feel the bond with these characters They start playing the given character because they feel the relationship with their origin ADAM ORTH: Everyone can jump in and play in the Firewall You do not have to be a fan of hardcore shooters This game allows everyone to feel what we are