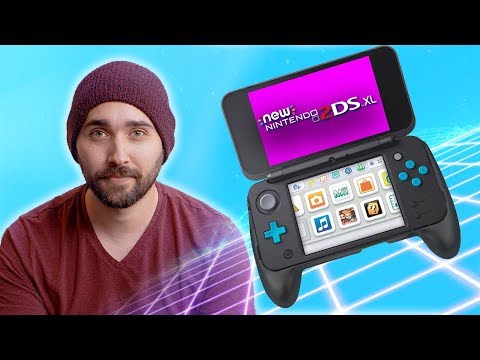 (static) – The new 2DS XL has officially arrived in the US

And whether it's your first 3DS system or you're upgrading from previous one, chances are there's gonna be some accessories you wanna grab to get the most out of your system So, let's go over the best accessories for the 2DS XL First off is something that I've talked about a thousand times before, but I will keep talking about every time we do a video like this because it's that important Screen protectors Now, especially in the case of the 3DS or 2DS XL here, it's really important to have one of these because that touch screen is getting so much more use compared to most other portables

Especially if you have kids I cannot list how many times I've seen a DS with a ruined touch screen because a kid doesn't understand you're not supposed to be pressing down with the stylus with the force of a meteor (explosion) Now, you can get just regular plastic screen protectors for just five or six bucks, but honestly I think it's worth upgrading just for a few dollars more to get a glass one It's gonna give you the best protection possible Some of the plastic ones are just the tiniest bit opaque, which can ruin the screen clarity, so this is gonna avoid that as well and you're much, much less likely to get any kind of air bubbles when you're applying it

Next is another form of important protection and that is a carrying case Now, the 2DS XL, thanks to it's clamshell design compared to the original 2DS, can fit in your pocket pretty comfortably, but at the same time, if you want to carry around things like your AC adapter or game cases, these are gonna come really handy Now, if you look up on Amazon, you're gonna see a ton of these listed with all kinds of different brand names attached and it can get a little difficult to kind of sort through which ones are good, which are bad For example, this Keten one here is currently the top seller and it's fine It's perfectly okay

It's inexpensive It's gonna cover all your base needs, but honestly not my favorite choice Some of it just feels kind of cheap design and it's only gonna carry eight games at once On the other hand, for just a few dollars more, you can grab this case, which carries up to 24 games Another important thing too for the 2DS specifically, is the fact that a lot of these cases also come with a place to carry an extra stylus, which normally, isn't a huge necessity, but considering the one that the 2DS carries, it is super tiny

This is really handy to have now Now that we've got the usual suspects out of the way, let's talk about something a little different A grip for your 2DS Now, I would argue that out of all the different designs Nintendo has had for the 3DS, the 2DS XL is one of the most comfortable, but it's still designed for portability Not necessarily having the most comfortable grip possible

That's why an attachment like this is gonna come in handy The 2DS snaps in place nice and securely It's not gonna fall out or anything and while it's not exactly as portable anymore, it's not gonna fit in your pocket easily, you're gonna have way more comfort levels playing the game over long periods of time And when you need to go on the move, just take them apart and you're good to go And as you may have noticed when I picked it up, it also has a built-in kick stand

Giving you a way to display the system on a tabletop or any other flat surface And then we have, of course, amiibo! Now, are these Nintendo's thinly veiled attempt to sell us overpriced DLC in the form of addicting little collectables? Yes Is this a marketing strategy that works? Definitely yes Now, if you never owned a new 3DS before or you never bought the attachment NFC reader for the original 3DS, this is gonna be the first time you can actually scan these things to use in your 3DS games And if you're not sure which games actually support them, all you gotta do is look at the case right here

On the top corner will it have the amiibo symbol This opens up all kinds of additional content in games like Fire Emblem, Super Smash Brothers or more recently, Hey! Pikman So, if you never got the chance to actually use amiibos before, definitely jump on it now Now, we live in a day and age where people carry all kinds of different portable electronics and if you're a Nintendo fan, chances are you might actually have two different portable gaming systems and as a result something that's becoming more and more handy to have on hand is a battery bank Now, this is one I've talked about before

It's one of the best ones that works with the Switch Comes from Anker and so it's a good one to have on hand if you're gonna have that along with the DS Obviously the DS's battery life is a little better, but you're still gonna run into those times where it's on low battery and you need that extra charge Now, some of you might be wondering, how exactly am I gonna charge my DS with this because the charger that comes with it is just a straight up AC adapter Well that's where this comes in handy

You can buy cable adapters that are USB to DS for super cheap This is a four foot one that cost very little for a couple bucks more, you can get a ten foot long one If you need the extra reach, but yeah Basically a necessity at this point So, there you have all the accessories you need to grab for your brand new 2DS XL

I'm gonna have everything linked down below in the description along with a couple alternative choices as well Now, we'll see you guys next time