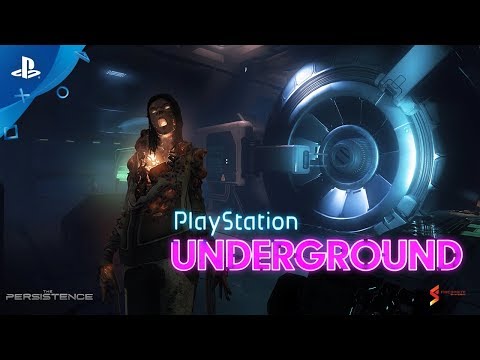 JUSTIN: Oh Something happened there

SID: Whoa It's sucking me in That was awesome [INTRO MUSIC PLAYING] JUSTIN: Welcome back to PlayStation Underground Justin and Kristen here along with Sid Shuman in the driver's seat here playing The Persistence for PlayStation VR

We are playing on a PS4 Pro unit Sid, first impressions? SID: I am all about this I've gotten a couple of minutes with this game, actually a very early stage of development And this has come so, so far I'm a huge fan of System Shock 2

It's one of my favorites game of all time BioShock This game even though it's a rogue-like is very much playing in that same sort of space JUSTIN: High praise So, Kristen, tell us a little about what's going on on this ship

KRISTEN: Yeah So as you can see we've got a couple of dead crewmates here There's sort of a singularity in space that your spaceship has sort of been attacked, shut down, all of your crewmates are dead, and you've been brought back as a clone in this rogue-like scenario You have to figure out what's wrong with the ship, get it back in order so you can get back to earth But in the meantime, your crewmates are going to sort of attack you

JUSTIN: In the meantime Sid Shuman just got some Rage Serum SID: I sure did JUSTIN: Let's see what happens when we inject ourselves with that SID: There's something creepy lurking around here I can hear it

JUSTIN: Find something to hit SID: I'll try So it's procedurally generated every time you play this I just died and I came back, and this is totally different now Okay

I see fresh victims over here There's a little teleport move you can do here to kind of — JUSTIN: Oh yeah SID: This is — oh, dear Time to do some — JUSTIN: Send 'em flying SID: It can't see me

It doesn't have any eyes KRISTEN: I think that's super interesting that the different enemies depending on how mutated they are on their face, it will reflect how they attack you SID: It couldn't see me Isn't that crazy? JUSTIN: Yeah That's pretty awesome

So you were talking about the map The interesting thing about the map is there's a companion app that's going to come with this game where I think it's up to four players can connect KRISTEN: Four players JUSTIN: And players on their phones can kind of see a map of the ship The ship is also called "The Persistence" by the way

KRISTEN: They can use that to help the player They can lead them around the map, tell them where certain resources are Or they can use it against the player, turn off lights, spawn enemies, sort of make it a little bit harder if they want it to be You never know who to trust SID: I don't like the look of this

KRISTEN: How do you want to handle it, Sid? SID: I'm going to do some hand-to-hand combat here Or I'll just harvest the stem cells That works too Oh crap Use my force field here

Get him JUSTIN: Oh nice Well done SID: So I'm getting money out of these guys essentially when I do this KRISTEN: I was going to say

So these stem cells that you're finding all around the place, all the resources, the ones that you're harvesting, these will help you upgrade your character that even though it's a rogue-like, you can still take some of these upgrades with you whether it's weapons, whether it's armor or abilities The more that you find, the easier it will be to get farther SID: Great interface design on this There's a number of different choices you can make in terms of how the controls work, just for comfort JUSTIN: Tell me how you're picking this stuff up

SID: So you just stare at it So that little animation means it's about to pick it up JUSTIN: There you go SID: So you don't even have to push a button KRISTEN: It's pretty intuitive

JUSTIN: Not run around mashing a button to pick up all the stuff SID: That's right because that gets very tedious in these kinds of games I notice there's a bunch of fabricators There's all different things you can buy, Gravity Bombs, Swarm Droids Let's buy that real quick

See what that does JUSTIN: And there are upgrades and items that you can upgrade that persist across runs So there is some sort of permanent progression going on, so it's not completely fresh every time SID: Right You're using the stem cells and other stuff after you die, so it's a rogue-like

If I die here, I got to start over But you use it to sort of customize your character so hopefully they have a better chance of surviving JUSTIN: And you can come across dead crewmates as well You can sample their DNA, and you can make clones of them And they have different abilities, different strengths and weaknesses

SID: I hear some labored breathing which is not a good sign I think he's through this other door here JUSTIN: Go towards the heavy breathing What could go wrong? SID: There it is Let's try this new grenade out

Ho, ho, ho, ho JUSTIN: Something happened there SID: Whoa It's sucking me in That was awesome

Cool JUSTIN: That was cool KRISTEN: That was really cool SID: This game is very, very cool I am a very big believer in this having played this new build

You said there's a demo out now on PlayStation Store? JUSTIN: That's right If you go to PlayStation Store, there's a free demo of this you can play right now, but the full game is coming out on July 24th, so not that long SID: Yeah This is right around the corner This just vaulted to the top of my must play list

JUSTIN: I mean, you are doing great right now SID: A little teleport maneuver right there You like that move? JUSTIN: That's a really cool move SID: I like how they do the teleporting in this Teleporting is a common feature in a lot of VR games

It's kind of as easy way to move around But here it's kind of more strategic I'm using full-blown FPS controls by the way JUSTIN: Oh, yeah Tell us about some of the different comfort modes that SID: Yeah

There's a whole bunch You can customize a ton of stuff I noticed in the options menu You can just, like, all different manner of bells and whistles and different modes You can narrow the FOVs with sort of the sides of the screen which makes it more comfortable for some folks There's something here

JUSTIN: Oh no Careful SID: Oh my god This guy is messing me up KRISTEN: You can't see

SID: That's it JUSTIN: That was a pretty good run SID: It's all a part of the process, right? JUSTIN: And then you just boot back up, print a new clone, get back in there SID: So I believe you can kind of create other builds or something there I'm not totally certain

I'll come back as sort of the default character here JUSTIN: So I saw it said "free" to print that one So I guess as you unlock other ones, you can pay to print different ones SID: I got the sense that you can kind of resurrect former crewmates who are dead You're the last one left on the ship

JUSTIN: Yeah Yeah SID: They're all mutated due to this singularity here that's scrambling all the circuits on the spaceship and the 3D printers JUSTIN: How rad does that look in VR? SID: It looks tremendous It looks really, really cool

JUSTIN: It's looks pretty cool from here SID: So now the whole ship is different I think a couple of the basic areas are the same But where the enemies are, what items will be there JUSTIN: Those darn space singularities are always scrambling stuff up SID: They're always causing issues JUSTIN: Let's see if Sid can do a little bit better on one more SID: All right

Just one more quick run It is a rogue-like which is very unique See this is totally different already I don't know what thing I'm going to encounter here JUSTIN: What is that? SID: I'm a little concerned

JUSTIN: Is that a friend or a foe? SID: Come on KRISTEN: Uh-oh SID: It's a foe now JUSTIN: Sid? SID: Let me in JUSTIN: I love that dull clank

SID: Grab some stuff because I can't resist JUSTIN: I think you just irritated it SID: I think I made it mad I got to say, these are some of the best graphics I've seen on PSVR to be totally honest with you JUSTIN: Yeah

It looks awesome SID: Great lighting effects Ooh, can I take that gun? JUSTIN: Door's locked Can you unlock it? SID: Yeah JUSTIN: What does that do? SID: I don't know

Shoot stuff Let's go shoot some stuff JUSTIN: I guess you didn't have a gun before SID: This is crazy that every time we come in — KRISTEN: It's wildly different SID: It's totally different

JUSTIN: You can go to the gym SID: Get a work out in ALL: Oh! JUSTIN: Merciless SID: You aim with the head That is cool

This is super cool This is really well-designed Yeah This is a really good game JUSTIN: Can you reload? SID: Yeah

I have two bullets JUSTIN: It really doesn't give you — SID: True to form JUSTIN: Yeah SID: Get my flashlight going here Get more precious stem cells

I don't know if I have enough to buy anything Let's take a quick look JUSTIN: That's so cool just looking at stuff SID: That sounds cool Oh yeah

Give me that JUSTIN: It's got 60 bullets, 60 bullets SID: That should be enough JUSTIN: Yeah It's probably going to fire super fast though

SID: Get some protein here Oh, what do you know, it's stem cells All right JUSTIN: Did they program those vending machines to except stem cells as a form of payment? SID: It's strange It seems like a strange design decision

The weapons feel great JUSTIN: Nice SID: Get some chips This is a very well-designed game JUSTIN: I like the gun design there, the magazine on there

SID: It looks really cool, and it's really fun to shoot I'm out I'm back to clumsy flailing I like how you can do this block move It's like a counter

Oh, I died JUSTIN: They got you SID: See This game does not mess around JUSTIN: Well, that was a respectable run, Sid

SID: I am dying to play more of this This is a terrific start to what I think is going to be a very special game JUSTIN: Well it won't be long until you can play There's a free demo at PlayStation Store right now Go download that and then pick up the full game when it launches on July 24th

SID: And it never occurred to me that the rogue-like approach would work so well for a game in sort of the Shock-style formula, but it works perfectly JUSTIN: Yeah SID: It makes perfect sense JUSTIN: Well, no higher praise than Sid Shuman comparing it to a Shock game SID: That's right

JUSTIN: So that's The Persistence, like I said, coming to PS4, PSVR on July 24th Thanks for tuning in [OUTRO MUSIC PLAYING]