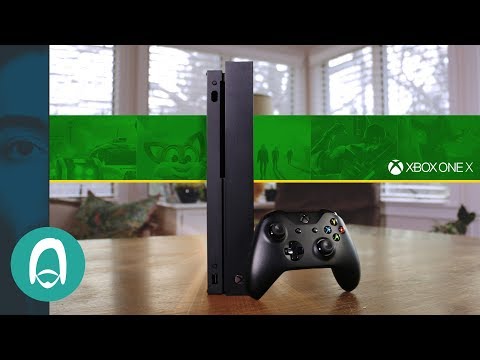 The Xbox One X has been out for 5 months to the day of this video's release It's part of the trend of these iterative consoles we've been seeing, to fill the void left behind by this super long console generation we're in

So now that it's been on the market for a little bit, is it worth getting? Was it EVER worth getting? [Intro] The Xbox One X is not for everybody It's for a very specific type of person It's price point is what probably turns most people off There are a ton of Xbox One S bundles right now, and you can get one for as low as $230 I got mine on Black Friday for about $200

The Xbox One X is $500! That's a STEEP increase If you didn't already know, the flagship feature of the X is it's 4k capabilities So that's the ONLY REASON you'd be getting this thing That and the so called improved performance in certain games So this console is only for people who have a 4k display, and have a ton of money to drop on a console generation that's already on it's way out

Yeah, you can probably already tell where we're going with this video It's a beautiful console It's a little bit smaller than the Xbox One S, which is insane given how much more powerful it is All of that power is packed into a tiny, sleek body Because of this, it's heavy as *bleep*

My favorite part about both of these consoles is that there's no power brick that Xbox has been notorious for in the past I've mentioned this before, but the Xbox One Controller is my favorite controller of any console Everything is exactly where it should be It's versatile in that the triggers could be used for throttle OR shooting, the face buttons are quick switches because they NEVER need to register pressure like the triggers do, and the d-pad is in a great spot and ALSO has that hard clicky feel It's the next best thing to a Nintendo d-pad

Which isn't saying much, because the alternative is the Sony abomination The thumbsticks are where you'll be spending most of your time, and they feel best to me in this placement People on PlayStation complain about "thumb-collision" Obviously that's not a concern here But all of that is the same on the S, the much cheaper console

Even the UI is identical, which isn't exactly a good thing I'm not sure if it's because I'm USED to the PlayStation UI, but I'd say the Xbox UI is the worst of any console this generation ESPECIALLY if we take the Wii U out of the picture There are currently 225 games that are available or announced to be available as enhanced on the Xbox One X I counted

Well I went to this web page and searched for all of the <tr> tags in the source and counted those Of those, only 128 run at 4k, only 59 are HDR, and only 45 are 4k AND HDR A bunch of those enhanced games are Xbox 360 games that were recently announced to have this compatibility Performance enhancement, not the Barry Bonds type, is important for a game like PUBG Where a steady frame rate or a building rendering correctly could mean the difference between life and death

But all anybody cares about really, is whether or not your game is going to be available in 4k, and it's important to keep in mind that not every game will be available in that way In fact, most games wont Pretty much only the big AAA ones will be 4k But when they are available in 4k, they look AWESOME 4k is BEAUTIFUL on this console, and on the right monitor

Edges are SO SHARP and crystal clear UI elements scale really wellAnd that's uh That's pretty much it While a AAA game like Far Cry will give you much clearer visuals, that also brings with it much bigger assets so the loading times are noticeably worse

Even though the hardware is better, it's got to render much bigger assets So this makes for bigger loading times in some cases, like in Far Cry It is definitely a lot prettier, and you get these really sharp crisp edges, but that also brings with it weird things like straw hair Don't get me wrong it looks awesome, and if you were gonna give me either an Xbox One S or an Xbox One X for free, of course I'm gonna want the X 4k is definitely better, but it might not be as much better as you think

Its cool, but if you've seen 4k anything before it's not gonna blow your mind I can't say that it's worth shelling out that extra $300 though Unless you ABSOLUTELY LOVE PUBG on console and need that extra edge, or you wanna WOW your friends on your big-ass 4k TV Most people just don't need this type of clarity Xbox One X enhanced doesn't always mean 4k either

It doesn't play games any higher than 1080p, but it DOES play 4k bluerays It even has HDR capabilities AND you can change the color depth to 10 or even 12 bit And 10 bit color looks GREAT on the right monitor Of course the X can do all this stuff too You'd LITERALLY only be getting the X for it's 4k capabilities on the few games that support it, and future AAA releases

I originally had a PS4 as my main multi-platform machine So if a game came out I'd most likely get it on PS4, because thats just what most of my friends had I got an Xbox One S just because I wanted to play PUBG on console, I have a whole video about that right here I got an X just to make a video on the best 4k gaming monitors That video was NOT THAT WORTH it

But now, if a game has any sort of Xbox One X enhancement I feel obligated to get it for Xbox That's really the only effect this console has had on my life Yes, Fortnite is one of the Xbox One X enhanced games too It's definitely clearer,but that's it I can't say it's THAT much better or that much more worth it

It already runs great on all the other consoles Some games have a steadier framerate on the X, that might be enough to get some of you clamoring to make the jump, especially if you play competitive online But that's just not a priority to me If you ARE going to make the jump, for the love of GOD make sure that you have an HDMI 20 cable and a monitor that has an HDMI 2

I feel like I spent this whole video just *bleep* on the Xbox One X It's a GREAT console I LOVE it Performance is definitely way better Things load faster, games that support it are clearer, framerate is in some cases better

Even if the framerate isn't "enhanced" it's still in a lot of cases at least more consistent than it otherwise would be on an Xbox One S I'm actually surprised at the amount of games that ARE on that Xbox One X enhanced list I thought it would be way lower But if it's 4k that you're looking for, there just aren't enough games out right now that support it I can't say that it's worth spending over DOUBLE what a baseline Xbox One costs just for that 4k support, especially this early on in the lifecycle of 4k gaming

I also think this whole trend of iterative consoles is dumb as hell Either make a new console, or don't Now developers have to develop for an extra 2 consoles within the same console generation If your goal was to make things easier for developers so they'd gravitate towards your console, you just ruined it So if you are in the market for a brand new Xbox, just get the S

Unless you're Uncle Pennybags in which case, you probably already bought it and are just watching this video while you wait for that Prime same day shipping I hope this video validated your purchase So what do you guys think about the Xbox One X? Have you been thinking about getting one? Do you have one already? Do you have an S? And maybe wanna make the upgrade or just don't? Or what do you think about 4k gaming in general? Leave in in the comments below @ me on Twitter all this other social media garbage We got new videos and livestreams all the time Here's a schedule right here

or people who subscribe to us on Twtich You take either of those accounts and link it to your Discord and then you get access to our supporter only Discord I tried to stream games with our supporters the other day and Mario Kart, just just mmmm So time to be determined, but this Thursday I'm gonna be playing Mario Kart with our supporters in our Discord chat, so be a part of that chat and I'll @ everybody and I'll give a notification when that's gonna happen

It's gonna be on Thursday Anyway of course most important things you can do is subscribe and share this video with a friend, a friend who is probably an Xbox person or was maybe thinking about getting one of these consoles And you can sway them one war or the other Thank you guys very much and have your selves a very good week, YEAH BABY!