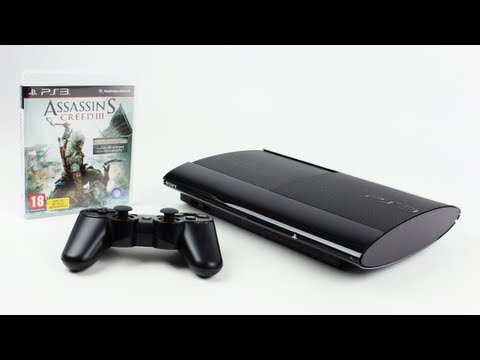 Hello there unboxers! This is Sakis Karpas from GameOvergr in another episode of Unboxholics! Today we will take a look at the Super Slim Edition PlayStation 3

In our hands, we hold the 500GB version while a 12GB version of the same bundle is also available in the market The Super Slim is the third console in the PS3 cycle and is the only one available right now With that being said, the 7th Generation of consoles has seen many console redesigns from Microsoft and Nintendo too A lot of complaints have been voiced about the Super PS3 Slim such as the cheap production cost and the new optical drive Let's see if they're true! The first thing we find inside is a Dualshock 3 Controller! Recommendations are not needed here, so let's move on! Let's check out what else is hidden inside: A power adapter cable A USB cable used for charging the controllers a composite cable used for Standard Definiton as well as a SCART adapter

An HDMI cable was not included Next up we find a retail version of Assassin's Creed III! Some manuals are also included but we won't bother you with that We remove the plastic covers andvoila! It's significantly smaller in terms of size and a bit lighter when compared to the PS3 Slim On the top side, a PS3 Logo decorates the optical drive The optical drive can be accessed by pressing the eject button as well as sliding it to the left However, the cover can be only be closed manually In general, the process of putting a Blu-Ray disc inside the optical drive seems quite outdated

In order to turn on the PlayStation 3, you have to press the power button which is also a LED one 2 USB Ports are located on the front side while a PlayStation logo can be found on the left side On the back side we can find: An AC Port An AV Multi Out Port for Standard Definition A digital out optical port An HDMI Port and an Ethernet Port In order for the air to flow right, the system has a few recesses on its back side The Super PS3 Slim compared to previous models is a much more cheaper version of the PS3

The new PS3 lid is really sensitive and it can easily be damaged Sony managed to lower the overall noise level and the temperature of the system when it's on The Super Slim PS3 Assassin's Creed III Bundle is available now at the price of €309 Don't forget to leave a comment, like our video (if you enjoyed it) and stay tuned to Unboxholics YouTube Channel! Friendly Reminder: An iPad 4 Giveaway is live on our channel now! Click on the annotation to go on the related Until the next episode, take care!