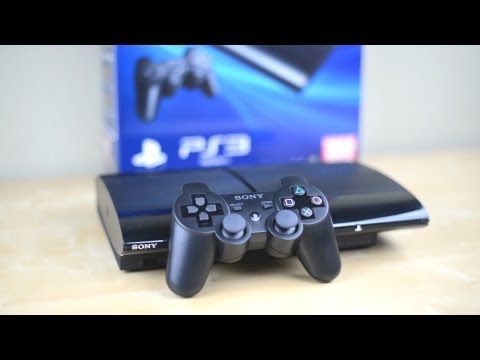 Hey guys, this is Austin and today I’m here with an unboxing of the new Super Slim PlayStation 3 With a major redesign and two new bundles to choose from let’s take a look at what you get

As always, you’ll find a seal keeping us out of the box but a small incision will make quick work of it Pop open the top and you’ll seeboxception

[inception sound bite] Inside is a nearly identical box without the Uncharted branding I imagine this is what you’ll be able to pick up when you’re able to get the Super Slim PS3 without a bundle So let’s start again Cut the tape on this box and pop it open to finally get at the good stuff Included is your standard PlayStation 3 controller, MiniUSB cable to charge it, power cable for the PS3 which thankfully still isn’t an external AC adapter and a standard video cable

No HDMI unfortunately Keep going and you’ll see an incredibly helpful diagram on how to transfer data from your old PS3 Included with this bundle is a DLC code for Dust 514 and 30 day free membership to PlayStation Plus You’ll also find the full Bluray for Uncharted 3, quick start guide, safety guide and a pamphlet on video game ratings Exciting huh? The PlayStation itself comes in a giant egg carton

The biggest difference is up top where you’ll find the optical drive is moved Press the eject button and the spring loaded top panel slides back It works fine but feels a bit cheap and plasticky and the overlapping parts on the top don’t look amazing The rest of the system is similar to the PS3 Slim Up front are a pair of USB ports and around back is Ethernet, HDMI, Optical Audio, AV out and the power connector

You’ll also find Wi-Fi and Bluetooth built-in The console will stand up on it’s own but it’s not too stable so it’s still a good idea to buy a stand for it One thing you’ll quickly notice is that the new PS3 is a major fingerprint magnet, just like the original version If you’re looking for a new PS3 this is a solid choice with a bigger hard drive and good bundled games like Assassin’s Creed 3 but they are a bit hard to come by right now I had luck finding one on Amazon so I’ll drop a link in the description if you’re interested