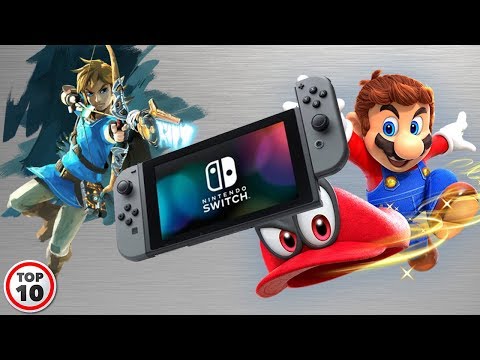 Hey guys! Welcome back to Top 10 Gaming, I’m Ron McKenzie-Lefurgey Nintendo Switch has had a huge amount of success since its release, for a few reasons

It’s a solid system, it’s unique, it can be used both portably and not But perhaps the biggest reason for its success is the awesome selection of games you can get for it! So let’s go over some of the best games out there for Nintendo Switch! Of course, this will be fairly subjective, but I’ll do my best to list the games that gamers on the whole enjoy, not just my personal favourites If you enjoy this video, let us know by throwing us a thumbs up down below And if you want more, check out our video on the Nintendo E3 Conference! But before you do that, get ready, it’s time for the Top 10 Best Games for Nintendo Switch! Number 10: Shovel Knight: Treasure Trove Shovel Knight was first released on June 26, 2014 by Yacht Club Games

And it was awesome, an indie platformer that rivalled the best ever made, throwing back to the old 8-bit platformers But when Treasure Trove edition was released in March 2017 on Nintendo Switch, it quickly became one of the most popular switch games out there It includes all the campaigns that were funded through kickstarter, as well as the original game Definitely a solid game that has had great success And hey, while we’re on the subject of knights… Number 9: Hollow Knight

Hollow Knight is a Metroidvania style game that is, admittedly, a bit similar to Shovel Knight, not just in name but also because they’re both platformers But Hollow Knight is definitely an original game in its own right, with rather different mechanics and looks It was made by Team Cherry by just three people, taking inspiration from Zelda and Metroid In the game, you play as a tiny knight, as you explore a dangerous, underground world, wielding a nail and using powerful spells And in the two weeks following its release on Switch on June 12th, 2018, it sold over 250,000 copies

Not too shabby And did I mention it was made by THREE PEOPLE? Dang They’re talented And rich Number 8: Sonic Mania Plus

Yep, this IS Top 10 Gaming, so I’m contractually obligated to mention Sonic at least once a video That’s a joke, but like… it may as well be true Anyway, Sonic Mania was a breath of fresh air for Sonic fans, who had been so often disappointed with Sonic games in recent years It was a trip back to the good old days, and everyone was very pleased But Sonic Mania was not released with physical copies, and fans and retailers wanted them

So Sega said "Uh, you want to give us more money for the same game? Sure" Now, since a retail release is more expensive, they added some stuff to the game to make it worth it, which made Sonic Mania Plus even better than the original It added Ray and Mighty to the game, changed some level designs, and changed multiplayer to allow 4 players at once

And it was just bomb Number 7: Mario Tennis Aces Mario Tennis Aces had fans a little bit worried, but ended up exceeding expectations I can’t imagine anyone needs a description, but if you do, it’s a game where you play tennis as Mario characters But this game saw a bunch of really cool additions and changes to the game, to make it even more engaging and unique, and more than just a tennis game

A bunch of different kind of shots, like zone shot and trick shot, add a whole new element to the game This is what Nintendo games should be, just fun, fast, a little bit silly, and great for passing around with your friends And it’s awesome Number 6: Mario Kart 8 Deluxe Even though it was originally a Wii U game that was ported to the Switch, this game is on this list for many reasons

For one, Mario Kart is always fun Even a bad Mario Kart game is still a good game But this is one of the best ever, possibly even THE best It packs all the same racing action with your favourite Mario characters, and has some really cool additions that take advantage of the Switch’s capabilities Deluxe lets you use every character on every track, including DLC, gives you new vehicles, brings back old items, and more

You can also race 8 at a time locally, and even play two player on the go Just don't play in public if you get competitive; nobody needs to see you cry Number 5: Splatoon 2 Not gonna lie, I’ve somehow managed to almost completely avoid hearing anything about Splatoon 2 But it is without a doubt one of the most successful games on the Switch

It’s a shooter, which isn’t exactly Nintendo’s usual MO, but when you look at the graphics and the mechanics, you can see that it is definitely a Nintendo game And I mean that in a good way It's super crazy, and cartoonish, and quite silly, involving players shooting at each other with coloured ink, switching between humanoid and squid form, to try to win a number of game modes With over 6 million copies sold, it’s one of the highest selling Switch games ever, so if you haven’t tried it yet, maybe it’s time to give it a chance Number 4: Celeste

Celeste was released on all the main platforms on January 25th, 2018, and very, very quickly became super popular With rave reviews, including many perfect scores, this platformer made by Canadian video game developers Matt Thorson and Noel berry is one of the most popular switch games ever And it's awesome Surprisingly, Celeste is not the name of the protagonist, who's really called Madeline (line) Celeste is the name of the fictional mountain in Western Canada, that you must climb, while battling a wide array of characters as you work through inner struggles

Definitely worth trying if you like this kind of game It’s especially popular in the speedrunning community, with players competing to finish it as quickly as possible But most people prefer to take it a bit slower Number 3: The Elder Scrolls 5: Skyrim That’s right

Skyrim In Skyrim, you play as the Dovahkin, someone born with the ability to absorb dragon souls, and utilize them to learn powerful shouts Skyrim has become a bit of a meme lately, since Bethesda had a habit of just porting the game to new systems rather than making new games But most people will agree that Skyrim is friggin awesome, and some of the changes they made for the switch made it even better, the most significant being, of course, motion controls This might seem a bit weird to have all the way up at number 3, since it isn’t exactly a Switch game

But it IS on the Switch, and Skyrim is just such an amazing game that it needs to be near the top of any list, regardless of the console So good Number 2: Super Mario Odyssey Super Mario Odyssey took the world by STORM when it was released on October 27, 2017 Hopes were high, and the game was even better than people had hoped

It has all the best parts of previous games, like Mario 64, Sunshine, and Galaxy, but added new mechanics too At times, you'll revert to a 2-D character to play 2-D levels, plus the introduction of Cappy brought a whole possession mechanic to the game, allowing Mario to gain cool new abilities by chucking his hat at nerds There are even alternate costumes you can use! If you have a switch and don’t have Odyssey, get it You won’t regret it Number 1: The Legend of Zelda: Breath of the Wild

Yep Yep yep yep Breath of the Wild was amazing In the game, we adventure as Link, who has awoken without his memories, in a futuristic Hyrule where Calamity Ganon threatens the safety of the world You need to release the powerful Divine Beasts and defeat Ganon before he regains his strength

And it’s sick Breath of the Wild brought us the most open-world Zelda game ever, and it worked really well Graphically stunning, awesome story, and best of all, they managed to make a Zelda game that played a more like a traditional RPG, while still feeling very much like Zelda There are some really cool mechanics, the glider is so fun, and it’s just so much less structured than previous Zelda games I love it

That’s it for today! Hope you guys enjoyed, if you did please smack that thumbs up button and subscribe to Top 10 Gaming for more videos! Let me know in the comments which Switch game is your favourite, and what games you’re most looking forward to! And also if you’d like a part 2, because there’s a lot more to talk about I really wanted to include Nintendo Labo but I thought I might get hate since people don’t really… like it that much… And check out our Top 10 Mario playlist for more videos like this one! Until next time, I’m Ron McKenzie-Lefurgey with Top 10 Gaming Later gamers!