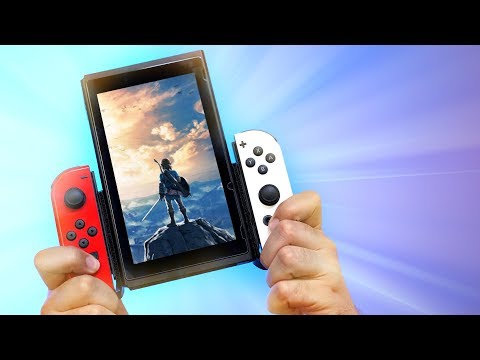 The entire idea of how you can use it handheld, on your TV, on a tabletop, there's just, it's able to fit a number of different play styles And something that's been coming up lately which even gives more credence to this idea is that there's more and more games showing up that are vertical Now obviously there's no games right now that are purely vertical and can only be played that way, but a number of titles that were originally say, arcade releases like Donkey Kong, PAC-MAN, Galaga, all these games were originally played with an aspect ratio that favored more verticality And so, those games when they come to the switch give you the option to play in that style And the only downside to this right now is that there's not really a comfortable way to really set this up

Outside of using a stand that holds the switch by itself in that mode If you wanna use it handheld, it's not really a choice yet Or is it There's been a recent really popular Kickstarter which gives people an option to use the Switch in a vertical style handheld Where it's a grip that holds the switch tablet in a vertical style, and has little sliders to put the Joy-Cons on

Now the only think a little awkward about this is because most of the games that offer vertical require you to flip the system this way you end up having to cover the volume and power buttons Which is a little annoying, but you still get the headphone jack at least which is important So this is something that's now at least become a Kickstarter that people are really hyped for, but we kind of wanted to see if there was a way that we could do this for ourselves right now So we got our setup going on here in the kind of simplest way we could figure out which is using command strips Probably not recommended for long period use

It's kind of weird to play in this style because I'm so used to using my Switch horizontally, obviously But at the same time, I mean, I'd spend time as a kid playing Galaga, and there's definitely something to having the actual vertical outline for it Like, you're filling the screen, you're using just as much space, it's just a different experience seeing it laid out this way Pausing as I think of more things to talk about Oh no I died, I should stop thinking, oh God

It's actually really cool that they even thought to include this as an option Because really, how many people would have, without thinking about it, just been like oh yeah I'm gonna turn my Switch sideways for a game, that makes sense But once you start using it, I mean, this is definitely, for this specific game at least, this works out better So it's not obviously using the entire screen for the game still But you definitely wouldn't be able to fit this same amount of real estate using it horizontally

It's really interesting trying out more games in a handheld style using this vertical setup, because it's just giving you a viewpoint that you don't normally get It kind of gives games a different focus This is almost something kind of like a 2DS, because you have a two screen setup for this game in particular, or like with PAC-MAN and Galaga, it's just vertically focused, which is kind of a really cool change of pace Now before we tried this idea there was one other thought we had which was to use one of the Joy-Cons still connected to what is currently the bottom of the Switch tablet The problem is is that you wouldn't be able to sync a single Joy-Con sideways like that while it's still connected

We need it to be simultaneously connected and not connected We would want to read it wirelessly, which as far as we can tell right now not really a way to rig up But it's also got me thinking, what if we could do this just a little crazier? Before moving on to that craziness though, I want to take a moment to shout out Dbrand for sponsoring today's video and supplying us with these awesome skins for the Switch They got a whole bunch of colors you normally can't get in Joy-Cons right now, this is one of my personal favorite combos, the red and white, because it gives me this Pokemon Pokeball vibe, really awesome If you wanna check them out, there's a link down below

So using the Switch vertically in handheld mode is cool and all, but why do we limit it just to handheld? Why not use it in docked as well? Upside down? Yeah this is upside down too right now Options upside down There we go, there it is Look it might just be because I'm used to years of playing on traditional displays, but there is really something about having this alternative viewpoint It allows you to design games with a different idea, focusing on this kind of sense of verticality instead of the traditional widescreen look

I kind of want this setup with a little almost, I want an arcade feel now with this where I just have the setup down here I really like how there are more Switch games embracing the idea of doing this vertical design And I really hope we actually start to see some tackling of it, where maybe there are some games that are just designed from the outside to only support vertical mode Because there's a lot of stuff that already does that There's already a number of mobile games that have been ported to the Switch, most of those are horizontal orientation

But there's a whole lot of great ones out there that are designed with vertical in mind And vertical video display is becoming more and more common Not just because of games on phones, but even more videos I mean IGTV just launched and that entirely favors watching things in vertical Like I said earlier, one of the big strengths of the Switch is its adaptability, and I think there's more that it can do than what we realize so far

I mean, yeah, you can do TV and handheld, that's cool, but we have games doing vertical like this right now And there's even more, we're seeing Nintendo experiment with it where in Mario Party, in handheld mode you can line up two different Switch tablets near each other and that creates one larger screen That is amazing And that just shows more cool ideas of how the Switch can already give you so many options and there's just even more that Nintendo can explore