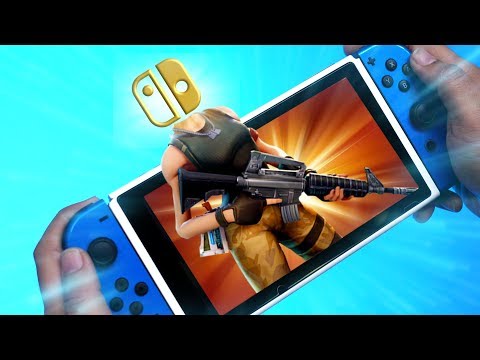 – It finally happened, Fortnite Battle Royale, has come to the Switch, giving us a way to play the game portably while still having access to actual controllers instead of having to use touch screen controls like on a mobile phone – You use your hands

– That's like a baby's toy – And if you're playing it on Switch or thinking about playing it on Switch, we've got a list of accessories that'll help maximize your experience and if you haven't checked it out before, you should really give it a look We've actually had a link down below, its free to play, check it out (electronic music) Now of course, the big deal about it being on Switch is being able to play it in the Switch's handheld mode and when you're playing the Switch in handheld there's two main things you really need to address Comfort and battery life, first let's talk comfort

The Switch is a great little handheld but if you're playing for long periods of time, it's not really the best shape for your hand It's a very flat back, it doesn't really give you a grip at all It doesn't work over long periods of time So you can actually find a lot of cases like this one right here, this is a really good cheap example, which just wraps around the entire system, gives it a little bit of protection but most importantly, adds these grip designs to the back where the Joy-Cons are so you have a much more comfortable grip on the overall system and its gonna help you play for long periods of time Now on the other hand, another way you can go, instead of focusing on comfort, is battery life

Because there's nothing worse than playing the game, getting pretty far, then seeing that little battery life flashing in the corner And this is the little guy we featured a couple of times that I really really love This is a battery case for the Switch Its fairly small in size, it'll still fit inside of a case but it gives you considerably more battery life when you're playing in handheld mode and if you still wanna increase your comfort a little bit since it only covers the main body of the Switch itself, you can still get little grips that'll attach specifically to Joy-Cons, to give you that better comfortable experience Added benefit to this option, too, this is gonna give you a better kickstand situation as well, instead of using the single kickstand on the back of the Switch, you get two of them right here

So you're not only gonna get that battery life, but a better way to have it setup when you wanna play in tabletop Now when you're not playing in handheld mode, whether that's in docked or tabletop mode, there's one very serious issue we need to talk about and that's controllers Look, I love the Joy-Cons, I think these are great little controllers for when you just wanna play something and you're relaxing, you're lazy, you're laid back It's just something you can comfortable hold in each hand and play a game But if you're doing anything that's more serious, more competitive, and that includes Fortnite, these just aren't gonna cut it

You need something that's gonna give you a better sense of being able to reach all the different buttons, a good long term comfort and just something that's a better design for intensive game play And there's a couple ways you can improve upon this One of them is getting a comfort grip to put the Joy-Cons into Now the Switch does come with a Nintendo stop version of the comfort grip, but honestly I really don't like that thing I mean it puts controller in the right shape but the grips on it are really uncomfortable so if you wanna cheap alternative to it, I really recommend this one from PowerA

The first glance, this looks like, pretty much the exact same thing, minus not having Nintendo branding all over it But the importance difference, is how the grip is designed Instead of being this flat, hard, plastic, like the Nintendo One has, this guy is a gripped curve design, which is made out of a softer rubber, just a little bit of give to it And its just way more comfortable when you're playing for long periods of time On the other hand, if you're willing to spend just a little more money, another option is you can grab this pro charging grip from PDP

Now like the PowerA One, you're getting revised grip design which is a lot better It doesn't have the same soft rubber, which I do kinda miss, but it is still a lot more comfortable The really interesting thing about this one though is it also augments the triggers on the Joy-Cons So it gives you little front bumpers for the front ones and actual proper triggers for ZR and ZL which feel a lot better, especially for an FPS On top of that, this is a full kit so it comes with a couple of extra items, one of which is these thumb grips right here which are a really nice improvement

They make the thumb sticks just a little larger but more importantly, make them a lot grippier Now if you wanna look into getting thumb sticks, make sure to be a little careful with other ones you might buy because they're are a lot of them out there but a big complaint with a lot of them is that on Joy-Cons they get a little too big, toward interferes with being able to press the B button comfortably which you know, can be a problem Now on top of all that, this is changing grip as well, so make sure the Joy-cons are always at full power whenever you're not playing you just put it on this little charge base right here and they'll be good to go whenever you wanna play Before moving on, I wanna take a second to thank Epic Games, the maker's of Fortnite Battle Royale, for sponsoring today's video Like I said earlier, Fortnite Battle Royale, is free to play, and is on basically every major system out right now

PS4, Xbox One, PC, MAC, Mobile, and now Switch iF you haven't played Fortnite before, it's a game that sends you in battles of up to a hundred players in PDP, you can play it by yourself or with friends in duos or squads, there's destructible environments, you can build structures, it's a bunch of fun Like I said, it's free so I you haven't played it before, check out the link we got down below Now Joy-Con grips are all well and good and they're a great option if you don't wanna spend a lot of money But at the end of the day, if you really wanna have an advantage playing competitive game on the Switch, you need to have a proper controller

Now of course, the official option for this is the Switch Pro Controller, which, if you already have one, great Go ahead and use that But honestly it's just kind of okay It's a solid normal traditional controller design It's got all the requisite buttons you need

It's a little pricey for what you get, in my opinion, but it's perfectly okay But there's other options you can go, that are either more affordable, or just straight up better Lets look at some of those First let's talk more affordable Now when you're looking at wired controller options for the Switch, there are a lot of options out there

Basically every major third party accessory company has made some kind of wired controller for the Switch And my personal favorite out of the options there for a nice cheap one, is the one from PDP With the PDP controller, you're gonna get a very similar layout to The Switch Pro Controller, everything is in basically the same place The only thing that's Switched around is the plus and minus buttons have been swapped with the capture and home buttons, which, for core game play, is not a big deal at all The buttons and sticks are all solid quality for being such a cheap controller

I really like the change to the triggers, which are longer, which is a little more comfortable The really nice thing about this controller though is not only is it a more affordable alternative to the Switch Pro Controller but you're also getting some re mappable buttons on the back which are gonna give you a couple more options for game play and can be really useful to mapping certain commands such as jump to On top of that the PDP controller comes in a couple different designs, this one in particular actually has a removable face plate which you can put a Mario or Luigi on, instead I of course, went for the better of two brothers and put Luigi on ♪ The Mario Brothers ♪ ♪ have plumbings a game ♪ ♪ We're not like the others who get all the fame ♪ Now going in a much different direction, all the controllers that currently exist for the Switch are fine, they're good, but there's a lot of really cool pro controllers out there that are compatible for other systems that would just honestly work better for playing a game like Fortnite And the great thing about the Switch is that there are a lot of options out there for using other Bluetooth controllers with the Switch

And one in particular is this 8-bit Do receiver right here This is a really simple setup, you just plug this into your Switch's dock and you can sync up with pretty much any other major controller out there So if you're a bigger fan of using a dual shock four, you can use that If you're a big fan of using the Xbox One controller which is personally my usual go to for just a standard controller design, you can use that as well, which works really well for FPS games But if you wanna go even farther than this you can use the same receiver to work with any kind of Bluetooth controller, which is higher quality, for instance, if you wanna use the Xbox Elite controller, or if you own A Scuf controller of PS4, those will work with this setup

So if you're gonna love the biggest advantage you can get, you can use pro controllers from pretty much nay other system as they are wireless and Bluetooth and use them for Fortnite So there's just a couple ways you can enhance your Fortnite game on the Switch Once again if you haven't played the game before it's totally free to play so make sure check out the link we have down below and I will see you guys later