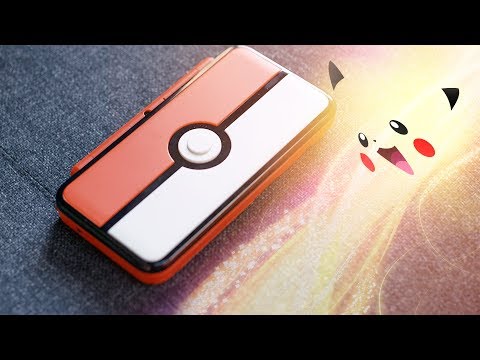 – The holiday releases are not stopping right now 'cause we've got another limited edition system that just came out, that we're gonna unbox for you guys And it's this Pokeball 2DS

♫ To catch them is my real test ♫ To train them is my call So what's kinda interesting about this, is that the new Pokemon game isn't even out yet, it's actually coming out next Friday So I guess Nintendo just couldn't wait for people to start grabbin' these Here it is now, so let's open it up, check it out We have, of course, the AR cards that are still shipping Every time

We have our Pokeball, let's open it up Did I just say Pokeball? It's Pokeball, what am I doing? That's awful, forgive me, guys Forgive me Oh It's actually really shiny

This is actually really funny, because if you guys watched my other unboxing video yesterday, I talked about how that Call of Duty system had the mixture of gloss and matte, and I didn't really care for it This is doing that too, but in a way that I actually really like So the black finish all here, is this glossy reflective, while the main body with the white and red is matte, which actually gives a nice, kinda just outline to it and lets the main Pokeball design really pop out I actually really like that So this is different, too

So most 2DS', the inside is still like, a plain black, matte finish Not here, we actually have red for the main body Still black around the screen, but this is definitely a much different-looking design, compared to the other 2DS' we've seen so far Yeah, really diggin' that black and red aesthetic on the inside – [Group] Who's that Pokemon? It's– – Austin Evans

– [Austin] Hey guys, this is Austin – This is the latest in a very, very long line of special edition Pokemon-themed systems that Nintendo has knocked out, because Pokemon being one of their biggest franchises, makes a lot of sense that they're just gonna pump out as many different special editions as they can And I gotta say, of all the ones they've done so far, this one's actually one of my favorites, for one very important reason It manages to be a Pokemon-themed system that isn't one of two things One, it isn't based on a specific game

We don't have legendaries for a certain game on it or anything like that It's not tied to a specific Pokemon to where, once you find out you hate that one, too bad And two, it is not Pikachu There is so much Pikachu on every special edition before I love that this one's actually just a unique design that celebrates Pokemon, but isn't tied to anything super specific

That being said, this is actually one of two special edition 2DS' that are coming out This one is the only one that we are getting in the US, meanwhile in Japan, they're getting another one that is, you guessed it, Pikachu-themed But that being said, it's actually a really cool-looking Pikachu theme, because it's his face, but like this one, it's actually kinda grooved out to where you actually have, like, the contour of his nose Which is unbelievably cute While this isn't coming out on the same day as a Pokemon game, it is time for Pokemon Ultra Sun and Ultra Moon to be coming out a week from now

Okay, made another mistake here, guys The game is coming out on the 17th, which is two weeks from the special edition system, not one week Resuming the video Now, this is one of those 5 updates, where we're not seeing, like, a whole new roster of a Pokemon added, but it's an update to Sun and Moon

It's adding new forms, a couple new Pokemon designs, and some really rad, new features The most recent that they've announced is that every single villain from all the other Pokemon games is coming back for you to battle, which is a really cool thing, if you've been a long-time fan of the series So, there we have the Pokeball 2DS unboxing If you guys wanna check this thing out, I'm gonna link down below in the description, and I will see you guys later

Essay On Homework Should Not Be Given Tips and Tricks