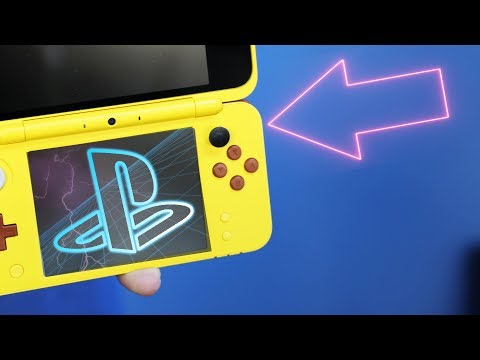 – The 2DS XL is an excellent handheld but there's one problem that it has that's shared with all the line of new 3DS systems and that's this little annoying guy right here – Oh that little guy? I wouldn't worry about that little guy

– The right C stick, which is barely even that it's basically just a little plastic nub that you apply some pressure to and magically, it counts it as left, right, up down It's just it feels unnatural, not comfortable at all to use and thankfully, there's actually a way to pretty easily mod this to something different if you don't mind doing a little bit of damage (slams against floor) Now this is not and idea I can take credit for this was originally discovered, I think on Reddit, by a user by the name of Spent The Day On Reddit and it was recently brought to my attention by our good friend Jimmy Champane, yes that is actually his real name Yes – [Man] That's his legal name? – That's his legal name! And on the forum they showed that you can do this with the new 3DS XL's where you basically rip this nub out and replace it with the slide pads from the PSP

Now all those tests back then were on the 3DS XL and I haven't actually read up on whether or not it works with the 2DS XL specifically, I don't see any reason why not but, while it might be an easy Google search to check, I kind of wanna just take the risk and see what happens Now from what I can tell, this may be an irreversible process because you basically rip out some stuff that keeps that nub in place So that's why I bought a brand new Pikachu 2DS XL that we're gonna open up and rip apart to do this change – Pika pika! (screaming) – I'm just joking that'd be a terrible idea, no, we're gonna do it on the basic 2DS XL So let's see how this goes

Okay so as I said the process is actually pretty basic the first thing we need to do is rip out this little nub and there's nothing really sophisticated about it, you basically just pry it out and maybe if you wanna be a little more careful you can cut some of the plastic and strings that help keep it in place So let's see how this goes (dramatic orchestral music) – Okay, so this already went kind of a little wrong I was able to get the nub out but I actually left the plastic constraints in there, which I don't think is gonna actually cause any problems for the rest of the process, it's just before, at least in the tutorials I've seen, that they're able to get the little loops out but shouldn't be an issue And this is actually the reason why this is kind of irreversible because yes you could just jam thing back in and it'll probably be okay but it's never gonna be secured quite the way it was when you bought it brand new

So this process is kind of reversible but there's definitely some lasting damage your kind of doing to the system The next step which is also, once again really simple, is to just take a PSP 1000 analog stick, it has to be a 1000 specifically they changed them on the 2000's, I don't know the specifics as to why that messes up this mod but it does matter for this So we bought these little black ones, you can get them in other colors and you're supposed to just be able to kind of just shove it in place and it should work Checking the back this looks kind of a diamond shape so we're gonna kind of put it diagonally So yeah, you're not getting the same kind of feeling you would on a PSP where it actually slides around a little because this is still based on just having that light pressure but this definitely feels loads better than that little plastic nub

It's almost like you're kind of just pressing a little and applying pressure to it Now of course just messing around on the menus just lets us know that the stick is registering up, down, left, right but we really wanna test it how it works in a game so I've booted up the opening part of Monster Hunter Stories, just gonna look around a little bit and see how it feels And it's actually really natural, like this actually feels like this is how the system was meant to be I mean, it's a little getting used to because I'm used to the PSP and I'm expecting the thumb stick to actually slide around but just like the nub, you just apply a little pressure, the gravity will rest your whole thumb on it and it just feels way more comfortable, nice a responsive too I mean, just feels natural

– Yes – So yeah not a very hard mod to pull off and I think what's really impressive to me about it is the fact that, for how basic the technique is where we pretty much just ripped out one part of system and shoved something else in it's place It looks like that PSP stick head actually belongs here, it blends in really nicely and in fact you can actually buy these in a couple different colors, such as white, so if you own a different color 2DS XL like the white and orange one, you can grab one of those which is gonna match a lot better And not only does it fit in that way but it doesn't interfere with any of the functionality of the 2DS at all In fact it's just thin enough to where you can still close the system perfectly fine

So yeah, awesome little thing you can do really easily