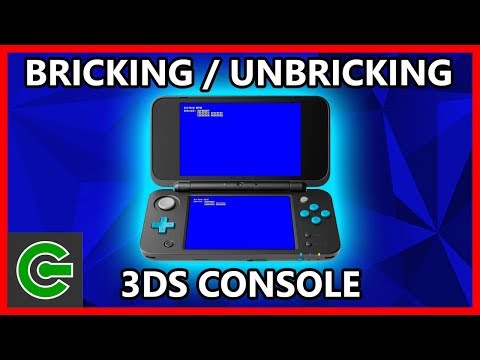 I think i have bricked my console Do you guys know what this is? So about my bricked console, actually I did it on purpose I did it to show you how I managed to fix it later This is my 2DS XL It is running custom firmware 11

6 Read the related video link in the description to install custom firmware on your console Before doing anything, I suggest you take your magnet and try to find the sweet spot to sleep the console I used a screwdriver magnetizer and demagnetizer for this Put it near the ABXY button and notice the screen goes black if affected by the magnet Now you have found the sweet spot Remember this configuration For those who have the New 3DS XL, remember this sweet spot It is located below the ABXY button For the flashcart, I have an R4i 3DS RTS flashcart Read the description for a list of ntrboot compatible flashcart

Editing one character will do it So pick a character on the third column and edit it I picked this percentage symbol then hold the A button and press the right button once to change it to 5 Then press B to exit the editing mode and press A to confirm it Press B again then press A to relock the NAND And then after pressing Start, you will have a bricked console The next step is how to repair it

If you don't remember how to reverse the steps you did or you don't have a NAND backup, then you cannot save the console If you want to restore the NAND, just go to the out folder inside gm9 folder There should be two files there Select the largest file then press A to continue, then choose NAND image options Then choose Restore Sysnand (safe) Ignore the warning and press A to continue Then again ignore the warning and press A to confirm I know how I bricked my console, so I just reverse it Now the console is restored to its previous state Now we will restore the flashcart