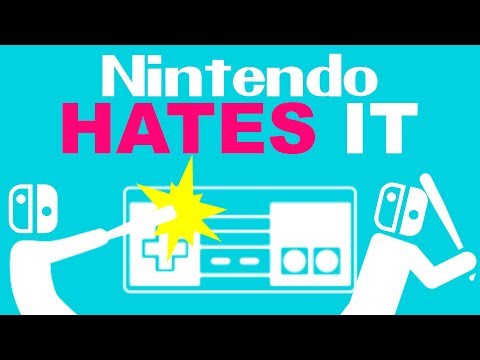 But they are asking for a lot of money Specifically, they want $2 million for legal use of their trademark, and an additional $150,000 for every single game posted, which adds up to an insane amount of money – I declare bankruptcy! – So much that there's not really any way these websites can actually pay that But it's accomplishing another goal of instilling a lot of fear in other websites In fact, Emuparadise, another very old ROM website, has decided to close down in response to this because they've decided it's just not worth the risk anymore versus dealing with the occasional cease and desist order

Now, a lot of people have been talking about this for a lot of different reasons, but what I really want to focus on here is the fact that well, look, in this situation, Nintendo is in the legal right There's nothing gray about this There's been a lot of arguments before They're like, "Oh, emulation is kind of legal "because of these reasons" – Shoplifting is a victimless crime

– It's really not The distribution of a large number of ROMs like this is just straight up illegal and there is nothing wrong with Nintendo pursuing action against it But at the same time, while it might be legally fine, there's kind of a questioning here of, is it actually a good thing to do? Now look, I'm personally not a huge advocate of piracy or downloading a lot of games I think that if there is a convenient and legal way to purchase an old-school retro game, you should take that course of action instead of any kind of piracy But that's not really the option for a lot of titles that exist out there

And it brings up this big question of what's going to happen to a lot of these old, historically-significant video games that the major companies really aren't putting any effort into preserving? And if they're not going to do it, who is? Sure, there are certain games that are pretty safety being re-released often like, Super Mario Brothers, Legends Zelda Link to the Past, numerous Mega Man games These are games that are going to get released again, and again, and again But the number of games that are safe like that are minuscule compared to the full library of NES, SNES, and other system libraries out there Now, you could argue that well, if a game's not being re-released digitally in any form, you just have to go ahead and hunt down physical copies Which, yeah, you can do that, but there's a few problems there

First off, some games are just exceedingly rare and hard to find to the point where just playing a certain game is gonna cost you over $100 because you have to find one in the first place and someone that's willing to sell it The other issue that comes up though is that physical copies like that aren't permanent In fact, some of them are already starting to die off and it's just going to get worse, and worse, as years go by There are games that if there is no digitally produced version of them, they are going to just straight up disappear Copies are going to go bad, batteries will die, things will get ruined and destroyed, until eventually, there's no trace of some of these classic titles

And this isn't just an issue of preservation It's also accessibility, making sure that some of these games that can become really rare and really expensive, but are at the same time, really, really good are something that people can still get a chance to experience A good recent example of this would be something like EarthBound For the longest time, EarthBound on SNES was worth a bunch of money, and was really hard to get a hold of But now, thanks to things like Virtual Console and the 3DS or picking up an SNES classic, it's something people can play more easily today

And not all the games get that opportunity And beyond that, there's also an argument for things that ROMs can open up, like translations There are so many amazing games that were released only in Japan that aren't available in any other language And if you want to experience those titles, there's not really another way to And I'll admit that I emulated a bunch of games when I was younger

And a lot of the ones that I really fell in love with were games that were never made available in the US And I would never have gotten any other way to experience them By the way, this isn't a problem that's unique to Nintendo They've just got the limelight right now because of the lawsuit I mean, look at other companies like Sony

Sony was doing a pretty good job for a while until the PS3 where they had backwards compatibility but then kind of dropped it mid-cycle And then with the PS4, they just dropped entirely And they kind of brought it back with PlayStation Now where you get some PS3 games and a small handful of PS2 greatest hits But there's a lot of games that are missing And some of those are available on PS1 through the PS Vita, and then there's the regenerational gap

And it's just gotten really confusing And then you've got SEGA who don't have their own console anymore, but they've kind of had some attempts with doing classic collections and re-releasing some Genesis games on iPhones But once again, there's a whole lot of titles being left out Really, the only company that seems to be doing anything about preservation is Xbox, which, to be fair, they have the youngest library But, there's the heavy push for the Xbox One to support 360 games, original Xbox games, where you can use the disc, but also download them

And the library is growing and being optimized, which is really cool And I hope it's something they continue to do with future systems And the thing that's really cool about that too is that with Xbox, it's all on one platform as to being kind of all over the place, which is going on right now with all the other companies I mean, with Nintendo, there's the Virtual Console, which now isn't on the Switch There's classic editions, there's re-releases of stuff

It's just all over the place, instead of just being one convenient solution And here's the thing, with the lawsuit taking down these websites and scaring others, it's not like ROMs are going to permanently disappear They're just going to be a lot harder to get And it raises the question of, why now is Nintendo doing this? 'Cause ROMs aren't exactly a brand new problem for them And they've dealt with it for a long time

Now, they are working on a system for the Switch, where they're going to have the online service And they've talked a little bit about having retro games on there But the full extent hasn't been talked about And so, there is that optimist in me, the hopeful part that wishes that the reason they're doing this is 'cause they're getting rid of competition And they are actually going to start doing something where we have full libraries

Is that what's happening? Probably not, but I can hope