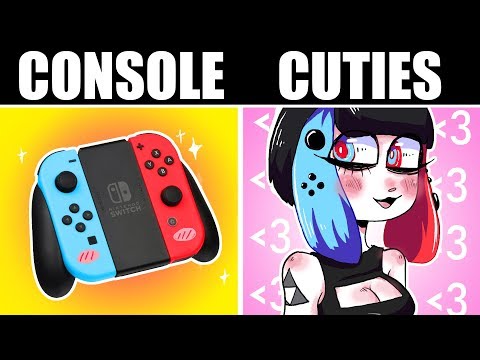 Hey everybody, it's lavender town and today I'm really excited because I'm combining two of my most favorite things in the world video games and character designs Speaking of video games I want to give a quick shout out to the sponsor of this video Elsword Elsword is an MMORPG in an anime style and I've talked to you guys about this one before, but today I'm talking about the new update that they just made to the game They've completely revamped and streamlined their skill system

You no longer have to use skill points and you learn skills automatically by reaching certain levels They've also updated all of the character artwork so now it looks even cuter and slicker than it did before So if you guys have never played it before and now's a good time to start and if you played it in the past you might want to check out the changes they just made Every playable character now has three different paths that they can go that change their skills and change basically how they turn out, and in addition to that, a new storyline has just begun It's called the Masters of darkness Check out the link in the description box if you want to try it out yourself Thank you again so much to Elsword for continually supporting the channel Okay guys, so I want to make a full character out of these girls so I want to make sure that they actually seem like they have some personality so I just started trying to think of what kind of person would be Nintendo switch be and because I think the switch really won the console war this time around I feel like she is the popular fun and youthful one, but she's also got a bit of a attitude of she's better than everyone else That was my plan with her So she um She has this sort of savage Wendy's kind of look on her face and in general She just really is a popular kind of character So I took a lot of elements of the switch and tried to incorporate it into her design I wanted the joy cons to be a part of her hair I gave her like this a-line sort of long in the front haircut so that we could put these little joy con elements around her face and I gave her a little hair accessories that look like the buttons and things that are on the joy cons And then I just tried to incorporate the body of the console by giving her a dark gray dress with the rectangle cutout that looks a bit like this screen and I also because I wanted her to seem like the young one, which often times the Nintendo games are aimed towards younger kids, not all of them, of course, but Because a lot of them are I wanted her to have tattoos

Don't comment I'm saying that I should change it because I do and uh yeah! With that she's done, you can see I changed it to blue because the X is blue So it makes more sense to be blue anyway So here is the current generation of consoles all hanging out as human characters! I know this character design challenge was kind of weird and silly, but I hope you guys enjoyed it I definitely did Let me know if you have any of these and what your favorite console is from this generation or like what your favorite console is of all time because I know a lot of people are still big fans of the ps2 even so, whatever your favorite is, let me know and if you don't play video games, and then I'm sorry again Thank you so much to Elsword for sponsoring this video Definitely check out the link in the description if you want to try out the game Thank you for staying till the end and I will see you guys next week! Big thank you to my patron including Scott Peterson, Christy Stuart, Enamel, TheArtsyMoose, Elizabeth, Alvin, Calpopon Kamiosparkle, Hinoki, Zixeth, Oli, Neko sama, Hope Chelsen, Abreanna, Traso Maniac, Micadactyl, Oak Amore, Matthew Kun K, Blep, Sergeant pendulum, Leena, Christine, Baba green, Taka, Lovely, Mystic, and Jojo your boy ST, and Adivisual