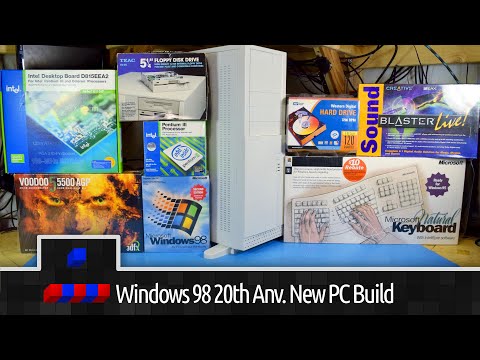 On June 25th, 1998 Microsoft released Windows 98 to the world June 25th, 2018 marks the 20-year anniversary of its release As a way of celebrating this, I thought it would be fun to build an all-new windows 98 gaming computer

Now when I say I'm building a new computer, I don't just mean another one, I'm building an all-new computer from unused 20 year old parts It took me about 2 years and a lot of patience to get all these parts, but the case is what really made me want to do this in the first place This is a new inbox Inwin Q500 Since 1999 it's been waiting to realize its potential as the over 2 foot tall full height tower that it is This is my all-time favorite computer case and I was very surprised when I was able to find one new inbox, so I knew I had to do something special with it Combined with the Windows 98 Anniversary it made for the perfect theme for a new build: An all new Windows 98 PC So I set out to find authentic parts for a period-correct Windows 98 PC: a CPU, motherboard RAM, video card, keyboard, mouse hard drive, sound card, disk drive ,floppy drive, newer floppy drive network card, USB card, front USB card, webcam, microphone speakers, gamepad joystick, floppy disk holders, and of course

a sealed copy of Windows 98 However, I did make one exception to the period-correct parts: a new EVGA power supply I would rather use a new one that doesn't quite fit the theme than an old one that's probably gone bad in its box But now the anniversary is here and it's time to put the computer together

So let's take a look at some of the most important parts, starting with the CPU This is a 1 gigahertz socket 370 Pentium III featuring a Tualatin core, this is the last generation of Pentium III and I will be installing it into this motherboard actually made by Intel Intel boards are regarded as a great option when building a computer They're usually missing features that third party boards commonly have, but I've always wanted to try one So I'm gonna be using this one in the new computer

Any features it's missing won't affect performance anyway, and this computer is gonna blow away the system requirements for Windows 98 Especially the video card, which is the beastly Voodoo 5 5500 The final flagship card for 3dfx, the Voodoo 5 5500 has two discrete GPUs and 64 megabytes of video memory The two VSA 100 GPUs run an SLI on a single card, 3dfx is of course the company that created SLI But before we try and put these parts together and make it POST, we need two more things: First, the new monitor A typical VGA CRT that will easily support the now uncommon resolutions that this computer will be outputting And secondly, the motherboard tray from the Inwin case

It's a shame that this was never adopted as a standard I suppose I'll also want the new power supply Now that everything's out, let's begin the assembly with the motherboard and next: the CPU For the heatsink, I'm gonna go ahead and not use the 19 year old thermal pad that came attached to it, and instead opt for some better modern stuff It feels kind of weird to put such a good modern thermal paste on such an old CPU After locking in place the heatsink and snapping on the fan, I can put in the maximum of 512 megabytes of memory that this motherboard's 815E chipset will support And finally, it's time to install the voodoo 5 Now that all the basic parts are in, it's time for the smoke test uhhhhhhhhhhhhhhhhhhhhhhhhhhhhhhhhhh That's not good After a little bit of testing, I've determined that the motherboard won't POST with the voodoo 5 installed And if you look in this area right here It looks like a capacitor blew, which means I'm gonna have to recap the voodoo 5

With that taken care of we can try once more to power it on beep beep Excellent! There are still a few more parts we need to put in the computer before Windows 98 can be installed So let's get out the hard drive, disk drive, 5¼ floppy, 3½ floppy, keyboard, and mouse Now to install the hard drive, and the disk drive,

which are both IDE drives and need to have the master and slave set correctly The floppy drives are much easier: they just have to be plugged in to the right connector on the cables Now for my favourite keyboard for Windows 98, (computer ergonomics were much bigger in the 90s) and lastly what I think is a very interesting mouse, that is PS/2, beige, wireless, and uses a ball But now that everything's ready to go,

All that's left is to open my sealed copy of Windows 98 After this has been sitting on my shelf for a few years, it feels kind of weird to open it There's not as much inside as I would have thought, but all we need is the CD, and the boot floppy And now, it's time to finally install windows 98 With the install CD and boot floppy put in we can fire it up and begin the install First the hard drive needs to be formatted, which takes a little over a half hour for a 120 gigabyte drive like this

After that, it's ready to copy the windows files over and start to configure the computer And after a couple more restarts, it's finally ready for the first boot of Windows 98 The first thing I'm going to do is install the Voodoo 5 drivers so I can get rid of that annoying flicker while I'm filming Manually installing drivers after you get windows set up is definitely at relic of the past, since Windows will now just download all the drivers for you Now that the drivers are installed for the Voodoo 5, I kind of want to change to a different theme Ah, that's looking much better Now I'll just install the motherboard drivers so I can get all the built-in stuff working

Alright now that all the basic stuff is installed and ready, it's time to add in some more parts There are still a lot of parts left to go, it would have taken a couple hours for me to fully show the unboxing of all twenty parts I'm doing here That's why I've been cutting them down So for the remaining parts, we're gonna have to just fly by them I plan on doing more detailed videos about the more interesting parts later So stay tuned for those coming out soon

But, once all those parts are installed we're ready to experience the full boot up At this point the computer is pretty much done But let's add a few more extra parts to complete the experience Game controllers, webcam, microphone, and floppy disk holders Now the whole point of building a gaming computer is to play games Using Windows 98 for a gaming machine like this is popular for a reason: Windows 98 at its core is still DOS What that means is they can play some of the first-ever games released for PCs

In addition to that, the powerful Voodoo 5 in there was able to hold its own for a while after its release So we're gonna take a look at different games over a 20 year time span, all running on the same computer Well, I hope you've enjoyed this look at a brand new Windows 98 computer built 20 years after the operating system was released I enjoy keeping these kinds of old computers around, especially for games of which I have a few But this is definitely a once in a lifetime experience where you gather up 20 year old parts to build something new And I don't consider this computer done yet either, I already have some more brand-new parts that I plan on putting in here

But I probably won't keep with the brand new theme forever, it's getting a little difficult to find these things So I'll definitely be bringing this computer back in future videos And if you're a regular viewer of mine or just thought this was a little short, worry not: I'll be releasing a full experience re-edit that uses a lot more of the 150 gigs of footage I shot for this But for now, I hope you guys have enjoyed this look at it, and I'll see you later