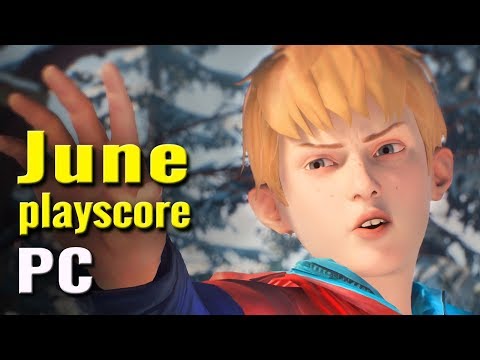 This free to play multiplayer first person shooter is proud of its record for being the first realistic paintball game Too bad it suffers from awful controls, slow movement, and bugs all over But hey, at least it’s free It receives a Provisional PlayScore of 429 Idle Heist

A free to play idle clicker from ChimpLabs The game’s main objective is to steal as much money from the bank before the popos arrive But the real challenge is the patience to make it through its unpolished and boring gameplay It has a Provisional PlayScore of 480 Shaq-Fu: A Legend Reborn

This beat ‘em up adventure game features the NBA icon Shaquille O’Neal off to a path of greatness in the realm of Kung Fu Engage in fun and epic battles with unique enemies as you explore numerous locations Fend off hordes of baddies from pop culture icons, to lowly street criminals from Hell and beyond It receives a Provisional PlayScore of 540 Tennis World Tour

Be a part of this tennis simulation game from Breakpoint, but you have to make sure you won’t be disappointed when you find out this game has no multiplayer Not to mention it has bad optimization It receives a Provisional PlayScore of 555 Far Cry 5: Hours Of Darkness How’s are the Vietnam flashbacks doing? Ubisoft’s downloadable content for their latest Far Cry game takes you to the center of the Vietnam War

Hope County is far away from this place, and this hour long shooter is a survival experience you won’t recover from It has a Provisional PlayScore of 563 The Crew 2 Ubisoft’s open world extreme motorsports game takes you to the land, skies and the sea Use a myriad of vehicles in intense driving action

Too bad the game is riddled with microtransactions and the typical Ubisoft business model It has a PlayScore of 620 MEMORIES OF MARS Set 100 years into the future, explore and survive the Red Planet with all your resources This survival open world game is still in its early access phase, it has its fair share of problems and it’s not in a good state as of the moment with a Provisional PlayScore of 6

30 Soul At Stake Currently on Steam’s Early Access, this oriental-themed 1 versus 4 survival horror game is similar to Dead By Daylight Except it’s made by Chinese It has a lot of potential, and it receives a Provisional PlayScore of 637 Lust For Darkness

A psychological horror game with tons of sexual content Trapped in an alien world with otherworldly creatures, find a way to escape this never ending nightmare filled with the occult and eroticism Explore the confines of this alternate Victorian Mansion as you run away from beasts, and your very own demons This walking simulator receives a PlayScore of 647 Antigraviator

A futuristic racing game created by Cybernetic Walrus It’s a whole new take on the anti-grav genre but you could tell its heavily inspired by the iconic WipeOut series Overtake your enemies in neon-lit tracks and feel the pulsating speed with no speed limits It has a Provisional PlayScore of 655 Contagion VR: Outbreak

You ever wanted to be in the middle of a zombie apocalypse? This virtual reality lets you be a survivor in an outbreak that turned every living thing a nightmare Team up with friends in co-op advenures, or test your skills in PvP combat Still on Early Access, it has its optimization issues that still needs resolving It receives a Provisional PlayScore of 668 Illusion: Tale Of The Mind

This indie-adventure game by Frima Studio lets you control Emma as she wanders inside an illusionist's mind in search of her father’s killer Despite its creative world, it fails to bring a whole new direction when it comes to enjoyment It’s receives a Provisional PlayScore of 675 Realm Royale Hi-Rez’s answer to the Battle Royale craze

Create your own champion and dive into a massive realm with 100 players Last one alive wins Choose from a wide variety of class, weapons, and abilities to dominate the battlefield It receives a Provisional PlayScore of 681 Flashing Lights – Police Fire EMS

A simulator made for people active on the police, medical and fire departments For hardcore emergency volunteers out there, this game is for you Save lifes, put out fires, and meet with fellow players in its online mode Currently on Steam’s Early Access and it has a Provisional PlayScore of 696 Darkest Dungeon: The Color Of Madness

A downloadable content from Red Hook Studios’ punishing lovecraftian RPG Enter a whole new region called The Farmstead and avert a mysterious alien object from threatening the existence of men This new story expansion adds more problems to your party such as new bosses, quirks, and tons of psychological dread It receives a Provisional PlayScore of 698 Jurassic World: Evolution

If life finds a way, video game publishers can, too This video game is based on the award-winning franchise from Steven Spielberg Create your own Jurassic Park and bioengineer dinosaurs that can think, feel and react intelligently to the world around you It has a lot of potential despites its shortcomings, but if you’re a fan of simulators and Dinosaurs, this might be for you It has a PlayScore of 7

18 Totally Accurate Battlegrounds Move over, Bluehole and Unreal This is the definitive Battle Royale experience Landfall’s hilarious physics-based multiplayer is filled with action, alright, but it’s downright insane with every step you take You can’t help but laugh at their absurd antics

It totally makes a meme out of the Battle Royale genre It has a Provisional PlayScore of 724 MotoGP 18 Considered as the ultimate MotoGP experience, it’s made for the avid fans of the series Start your engines and drive in its true to life visuals with an impressive attention to detail

Critics loved the games improvements, especially with its riding animations It has a Provisional PlayScore of 730 Vampyr DONTNOD’s latest game is set during 1918 London Play as a troubled Doctor slash Vampire

Pick between two sides of the coin in a flu-ravaged city Are you going to be a bloodthirsty beast? Or a savior? Your choices will determine the future of London Use your supernatural abilities to fight your enemies It receives a PlayScore of 730 LEGO: The Incredibles

TT Fusion’s incredible take on the adorable adventures of the Parr family is full of fun and humor Help them as they stop crime and lead their family at the same time It’s set during the original movie and the sequel so that’s two games in one! Meet your favorite characters from the series and unlock LEGO secrets by solving puzzles and so much more It has a Provisional PlayScore of 741 SG/ZH: School Girl/Zombie Hunter

Tamsoft’s survival shooter is all about less clothes, and more action If you know what I mean Fend off a horde of undead with your wide variety of guns The more damage you take, the more your clothes disappear Make it out alive inside Kirisaki High School because this game has a Provisional PlayScore of 7

42 BlazBlue: Cross Tag Battle An epic crossover fighting game from Arc System Works The beloved characters of the Persona 4 series, Under Night In Birth and RWBY are all joining the Blazblue heroes in a star-studded 2D fighting game It’s a crossover collision you can’t ever miss It has a PlayScore of 7

46 Dude, Stop From TeamHalfbeard, this funny puzzle game lets you break the game’s own rules All you hve to do is make fun of everything the game offers Mess up with the countless amount of puzzles and dude, don’t stop It has a Provisional PlayScore of 7

This was supposed to be an April Fool’s prank, but it got out of control they turned it into a full-fledged game It has a Provisional PlayScore of 760 Unravel Two It takes two to tangled in this latest installment from Electronic Arts’ adorable platformer This time, grab a friend because of its new co-op multiplayer

It’s just like your regular life in the office Use your ninja skills as you take down these pesky machines with your office tools It has a Provisional PlayScore of 766 Prey: Mooncrash A downloadable content from Bethesda’s sci-fi horror shooter

Enter a secret TranStar moon base and survive overwhelming odds of danger This time around, the game evolves into a rogue-like experience Players will encounter new levels, aliens weapons and so much more It offers an infinitely replayable campaign that tests your resourcefulness and patience It’s not the Prey you once knew, but it’s a good addition to the game with a Provisional PlayScore of 7

70 Gunheart An online co-op RPG from Drifter Entertainment Be a robotic bounty hunter with customizable features as you explore the far reaches of the galaxy looking for resources, and rare enemies to fight The game has VR support if you want a more immersive feel It has a Provisional PlayScore of 7

80 The Sims 4: Seasons The latest downloadable content in the Sim 4 Enjoy the holidays with your Sims in a calendar of seasons Make the most out of your time under the crisp snow falls during Winter, the sweltering heat during Summer and so much more! It has a Provisional PlayScore of 786 Dust N Wheels

Kiwa Games takes you to their beautiful and atmospheric racing world Returning to the old-school arcade you once knew, experience the thrill and excitement of white-knuckle racing It receives a Provisional PlayScore of 840 The Awesome Adventures Of Captain Spirit DONTNOD’s prologue to their most anticipated Life Is Strange 2

Everyone’s favorite Tasmanian Devil is out on the PC with insane platforming fun, and most of all, it’s now in fully-remastered visuals It receives a Provisional PlayScore of 844 Witch Hunt An early access indie horror game set in the 18th Century Go on a non-linear exploration with a haunting atmosphere

Play as a Witch Hunter tasked to eliminate an evil lurking in the woods of Bellville It receives a Provisional PlayScore of 845 Stoneshard: Prologue A free to play indie RPG adventure from Ink Stains Games This is a playable prologue from the actual game called Stoneshard

Learn the story behind the game’s main characters in this 2-3 hours worth of turn-based gameplay It receives a Provisional PlayScore of 870 Football, Tactics & Glory A turn-based football game from Creoteam with RPG elements Level up your units after clashes on each stadiums and turn your team into a worthy investment

It’s not the typical sports game you know and love, and it’s unique elements make the game worthy of a Provisional PlayScore of 892