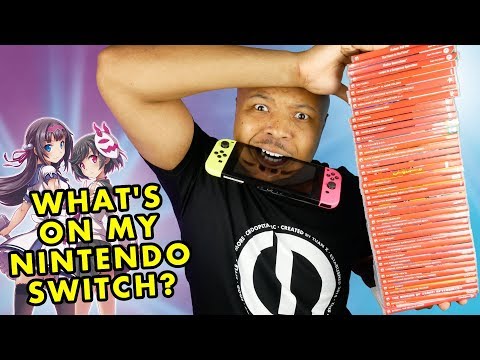 Now these games I've added to my collection are on top of the games that I've already talked about in the previous What's on my Nintendo Switch videos so go watch the whole series of videos where I talk about all the games that I've added to my collection Sounds good to you, sounds good to me, cool Oh yeah, if you haven't already, be sure to subscribe down below and hit that notification bell so you never miss an upload This month is gonna be a little bit different

It's gonna be a little eccentric These aren't your everyday titles that you're used to, a couple of them are but not all of them are Of course, I take your suggestions so if you have any games that you think I need to be playing let me know in the comments below And if you wanna add me on my Nintendo Switch my friend code is in the description below Now the first game I'm gonna talk about today is a game that was sent to me by my homies over at Super Rare Games

Now if you don't know about Super Rare Games they're a company that specializes in creating limited run versions of digital-only games You can check them out at superraregamescom, link is in the description below And the first game is Lovers in a Dangerous Spacetime Now if you don't know about this game it's based like a space shooter type video game developed by Asteroid Base

You can play with up to four players and basically you pilot a spaceship with a bunch of different stations inside of it and in these stations they control things like the weapons, the engine, and the shield And you control your little avatar and you gotta move from station to station in order to try to balance the flying ship, protecting damage and attack different enemies There are four different campaigns in this game, each of them contain four levels and a boss fight You also get like a new experience every time because the levels are random So each time you play it's a new experience

Next up on my Nintendo Switch is a game that I've put, I believe, over 60 hours into and it's probably not a game that you're thinking about it's Picross 2, I can't even front, I am addicted to this game It's one of those games that you can just pick up and play, anywhere, anytime If you played the original Picross on the Nintendo Switch and you loved it as much as I did you've been waiting for some more levels It's absolutely worth it

You got standard Picross, you've got mega Picross, and you got this little puzzle mode and what not where you're piecin' together this picture It's pretty cool Pretty much, if you like puzzle games you'll probably like Picross 2 Another game that I added to my Nintendo Switch collection, it's different, it's a little bit weird, in a good way though because the game is actually pretty decent and that is Gal Gun 2 That is one of those games I added to my collection just to have it in my collection because it will be a hard-to-find game in the future

So if you're trying to purchase games that you may not be able to find way down the line Gal Gun is probably one of those games, But basically it's a rail shooter type game where you're trying to fend off waves of female classmates It's highly sexualized In spite of its ridiculousness it's actually gotten pretty decent reviews It's not a completely terrible game Of course, it ain't gonna win nobody's Game of the Year awards and you may sit and ask yourself, why the hell am I playing this? But, you're not gonna feel like you're playing an incompetent game

And the next game that I added to my Nintendo Switch collection that I can't wait to start playing is the Crash Bandicoot N Sane Trilogy I loved these games on the original PlayStation Of course, if you haven't played the original Crash games, where the hell have you been? Maybe you're too young, if so, it's making me feel really, really old Basically Crash is, I mean, you should already know

It's a platforming adventure series Originally released back in the late 90s this is pretty much a remaster of the first three Crash Bandicoot games Pretty much you're going through level by level trying to stop Doctor Neo Cortex from taking over the world Just like in original games, you use spinning and jumping techniques, you smash crates, collect items, and you've got those Aku Aku masks The trilogy adds a few new features and you can play almost every level as Crash's sister, Coco

And they've also remastered the audio and all the different cutscenes and whatnot And the dialogue is voice acted by some of the more recent voice actors for the franchise And while this version of the N Sane Trilogy doesn't runs the best on the Nintendo Switch and I don't really understand why, I mean, blame the developers for that one If you are a fan of Crash and you are a Nintendo Switch owner I feel like this is a must-have

So why wouldn't I, this Nintendo Switch game collector, purchase Hello Kitty Kruisers for the Nintendo Switch just in case it may become rare? Hmm, hmm, hmm, think about it I mean, what's the game about? Honestly, does it matter? it's a Hello Kitty racing game featuring some Sanrio characters If you are a Hello Kitty fan out there, shout out to you Hello Kitty fans, go ahead, pick it up, add it to your collection It's Hello Kitty, why not? It's a racing game, is it a good racing game? No, it's not something I would recommend anybody pick up unless, again, you are a Hello Kitty fan These next three games right here are from a company called Limited Run Games and Limited Run Games is similar to Super Rare Games, they also specialize in creating limited release versions of digital-only games except they're an American based company, whereas Super Rare Games is a European based company

So shout out to both sides of the pond And these games are Saturday Morning RPG which is developed by Mighty Rabbit, Flinthook which is developed by Tribute and Mercenary Kings the Reloaded Edition which is also developed by Tribute Basically, Saturday Morning RPG is a Japanese RPG type game and you control a character named Marty in this open world The story itself is structured in like an episodic fashion like a lot of Saturday morning cartoons You can play the episodes in pretty much any order you want to and your stats can be transferred between episodes

In the game you control Marty, who's like this average high school student who gains extraordinary power through a magical notebook His power allows them to use everyday objects in battle against the evil forces of the Hood As you go through the game you'll discover new battle objects and new foes to fight It's got a bunch of 80s nostalgia, a lot of pop-culture references from that time as well Now, Flinthook is an action platformer type game where you use like a grappling hook to traverse these procedurally generated spaceships for different treasure and whatnot

And then Mercenary Kings is a side-scrolling shoot-'em-up type game Here you can basically jump, crouch, roll, shoot, and use a bunch of different melee attacks to make your way through a hundred-plus missions You have up to four player co-op which is pretty cool You can access all levels from a central hub, which is similar to games like Monster Hunter There's also a customization system where you can craft weapons, knives, armor, and different types of things to give your character unique abilities and whatnot

There are also some bonus features and whatnot including different challenge modes, online leaderboards, and this Mega Man history museum featuring concept art and other stuff as well They tried to keep intact all the gameplay elements that you know and love from the series Of course, the visual style as well Definitely worth picking up if you are a Mega Man fan Like I said, this is like an odd bunch of games that I've added to my collection this month

I hope you found something in there that you may be interested in checking out as well that's obviously the point of this video, let me know what you guys think and I'm gonna go ahead and play some more Hello Kitty (hip hop music)