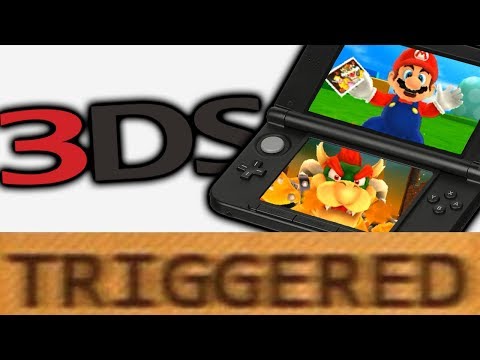 Wow, Nintendo, hopping on that 3D Bandwagon, huh? Well, thanks to that, your system costed way too much at the start, giving you an awful launch And the 3D isn't even that good! I don't know about you, but it just hurts my eyes

The only video game it was ever that useful for was Mario 3D Land Even those who like the 3D don't see it very often It's not implemented into a lot of the games If you have manly adult hands, the 3DS is really uncomfortable to hold So we got the 3DS, the 3DSXL, the 2DS, the New 3DS, the New 3DS XL and the new 2DS XL! Whoever is naming their consoles is doing a terrible job

Also, I can't get over that "new" is actually in the name Like, this console's not gonna be new in 20 years Did they not realize how stupid this is? The circle pad is awful The rubber piece can fall off if you play games too hard or too much This system kinda ruined Smash on the Wii U

Instead of getting a true adventure mode, we got a 3ds version of Smash You know The version that nobody plays anymore? Did anyone ever use the AR Cards after first getting the 3DS? Hmm? Or what about the 3D Camera? Like, honestly, the 3D just makes your pictures look super blurry

And it doesn't help if the normal pictures are super grainy, it's-it's just bad! God, what is that screen resolution? Oh, it's 800×240 pixels for both screens That's not even close to HD! And games are still coming out on this thing in 2017? The original 3DS didn't have a second Thumb Stick, so what does Nintendo do? They give us the CirclePad Pro, which is a huge a slab of plastic with an extra Circle Pad This couldn't possibly look more ugly But hey, at least the "new" 3DS' have a built in second circle pad! If you can even count this tiny little nub being one I mean, just look at how small this frickin' thing is! There was no GBA virtual console, even though the console proved to be capable The Ambassador Program included 10 GBA games, So why didn't they keep going with that? The 2DS' design makes zero sense Removing the clamshell makes it more likely that the screen will get cracked And this was marketed mostly towards kids! R

IP All those 2DS screens Also, isn't it strange how the 2DS and new 2DS just removed 3D entirely when the 3D was the main gimmick of the console? Adding or changing the microSD Card on the new 3DS is like a giant science experiment You have to remove your Game Card and Stylus, unscrew the Back Plate of the 3ds with a screwdriver, and THEN you can swap it out And don't even get me started on transferring data between SD Cards! Ahh! Ya know, after ALL this trouble, Why didn't ANY of the 3ds models have a lot more storage to begin with? And why did Nintendo include the ZL and ZR buttons on the new models when most games don't even use them? The fact that some games are exclusive to the "new" system

Like, you can't play Xenoblade on the older 3ds Face Raiders is pretty terrifying, I'm not gonna lie You only get SNES Games from the e-shop with the "New" models? a- a, are you actually serious?! Nintendo, it's SNES Game! A SNES GAME! Like, what kind of nonsense is this?! The only way you can play Kid Icarus: Uprising is in 3D AND you have to have it on a specific stand I'm sure the game is fun, but GOOD LORD You know why we didn't get the Ice Climbers in Smash 4? Because of this thing

So good job you inferior underpowered system! You done screwed it up! The 3DS Themes actually cost money Wha-Why? Why can't we just unlock them by playing games or something? If you wanna use Amiibo with your older 3DS, you have to buy an additional NFC Reader When I'm turning my 3DS off, I also have to hit a button on the touchscreen to turn it off Why do i have to hit 2 buttons to turn off my console? Why did Nintendo get rid of PictoChat? That was the greatest service of all time! I didn't even know game notes existed until now And I don't know why anyone would take notes when you have the internet, with it's millions of game guides

I also never saw a point to the Notifications App Whenever you download something off the e-shop, you can't tell how long it's gonna take because there's no progress bar Oh, cool! A super outdated internet browser! It's not like I can't use my phone, tablet, computer, or basically anything else to surf the internet faster Don't let the Mii try to make your Mii Maker It won't end well

Trust me You know what? Let's talk about transferring data between the 3DS and New 3DS What you need is your 3DS, an SD Card, wireless internet, the new 3DS The MicroSD Card which has to be equal or bigger then your original SD Card, A size 0 Phillips screwdriver, and possibly a computer and USB Adapter to connect the SD Card to the computer You got all that? GOOD Now go to system transfer and the system settings on both 3DS's

Click "Transfer from a System" on the 3DS family on both systems, then on the regular 3DS you click "Send from This System" and on the new 3DS "Receive from 3DS" Then make sure to click "Delete" to clean the MicroSD on the New 3DS so you can actually transfer the data Then push "No" on the New 3DS to confirm no other SD cards have been used on that system Then click "Yes" on the regular 3DS to confirm that you're using an SD Card, Which is actually kind of ridiculous that the 3DS can't even register that itself And then there's an option to transfer your data with a PC But SCREW THAT we're going wireless because this is already taking way too long

Then after the data has finished transferring, you reset your 3DS's and it's finally done Ugh I feel like I could've learned a language in the time it took to do that

It's really funny guys, and I think you're going to love it [End card] All right guys, I want you to tell Jon what your favorite 3DS game is So do that in the comments, right now