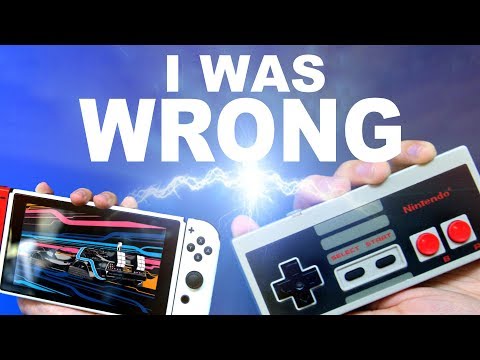 Last week some of you guys might've caught a video that promptly disappeared, which was about this little controller right here This is a kit from 8BitDo, that allows you to hollow out an NES or SNES controller and turn it into one of their Bluetooth controllers Which is really cool! But one of the complaints I had is that, I thought there was no way to charge the controller without actually reopening the case and plugging it in because there's a micro usb port inside on the board and I saw the cable; didn't really take a close look at it and assumed it was a micro usb like most of the controllers It's not The cable it comes with has this specialty little attachment which plugs into the LED light indicator up top that you use in the mod kit which is actually a pretty genius solution to make this a really simple swap out, so a lot better than I thought it was

But that gave us some more time to be able to mess with the controller, try it on some other stuff, so here we go, round two If you've been watching this channel, you know I'm a huge fan of anything that involves mixing retro gaming with modern day tech and a company that does a lot of stuff like that that we've talked about a few times is 8BitDo And one of the most recent things they've done is pretty interesting actually They've released these kits where you're able to mod an NES or SNES controller into a Bluetooth controller that you can use with one of their retro receivers They have released their own, kinda retro style controllers before, but this gives the ability to make a Bluetooth controller that actually looks like an official Nintendo one, which is really cool

It's also supposed to be really easy to do, so we're gonna go ahead and try it right now Now, to be honest, I did try to do this yesterday, we actually shot bunch and while the process does look really simple, we ran into one very specific problem we weren't really ready for and well, yeah it didn't go great This screw's definitely in trouble We're drilling (drill buzzing) So I'm supposed to go full speed and just wreck this thing? Is that the plan? Okay

So anyways, let's go ahead and try this again, and I have more controllers, so hopefully we won't have that problem So let's go ahead, you know what, we had a problem with SNES yesterday, let's start with NES to kinda just, start on a different foot So the process is supposed to be pretty simple, based on what I've read in the instructions, and everything, all we really need to do is pop open these controllers, which is where we had a problem last time (laughs), but once you do that, all you're doing is basically just switching out the board inside, and re-closing it back up There's no soldering, there's no dremmel-ing, nothing special like you have to do with some mods, very, very straight forward Random thing I just noticed, while I'm doing this, taking my time pulling out the screws, for the longest time, I never remembered or realized, that NES controllers have the cable offset

For whatever reason, in my memory, you can just picture in your head, I'm like yeah the cable's in the middle, that makes sense; no Alright, so, there's the inside of an NES controller, and here's what we're gonna replace it with Okay, so we have, this is the new board, that's gonna go inside I think it goes this way No, that doesn't make sense

Now it makes sense I had the controller upside down Okay, so, this should just go right here, and then where the cable was coming up before, is where we're gonna have, what I think is like the little syncing button for the controller, which also serves kinda like a little indicator light I'm now realizing that of the two NES controllers I could've switched out for, this is actually the slightly uglier of the two Oh well, what's done is done

I'm not back-tracking Alright, seems pretty together I probably messed up in putting the button in We'll deal with that later So, we've got our modded controller all set up, and you're probably wondering, what are we actually connecting this to, 'cause the NES doesn't have Bluetooth, little too old for that, so, like other 8BitDo controllers, this guy's designed to work with a few different other systems, you can use it with like a switch, or android, which is a little weird, cause you only have, basically four buttons and a D-pad, not a great idea, and it should just auto-sync after a little bit of time

Yep, there it is So, obviously, this is gonna make playing some games, rather difficult, so we're gonna stick with Mario Cart, I can't use items, and I can't hop or anything, but I can go and break So that's all we really need, you know So yeah, if you want to, you could use an original NES, now you could also use the SNES controller, which would actually make a little more sense, and give you a few more options, actually probably even giving you full functionality in some games, but, you know, sometimes you just wanna use an NES controller I can't throw the shell

I wanna throw this shell, but I can't I'm going for buttons that I don't have So obviously the NES controller is not the strongest choice for anything that isn't an NES game, but the SNES controller on the other hand, offers just enough extra buttons that you can use it for a lot more stuff For instance, I'm hooked up to my MacBook right now, I'm playing a recent indie game, Chasm, which is a kind of retro-style Metroidvania game, so it fits perfectly, they only need six buttons, the four front facing, and the two start and selects, and yeah, you're able to play it, just totally fine, actually even feels extra Even more natural to me, because this game is clearly meant to kinda capture an older style of game, and this just feels right, especially having grown up on the Super Nintendo, I actually started being better at this game this morning, when I started playing it with this controller, versus using a keyboard like I was before The main thing you're supposed to use this though with, is with their retro receivers, which hook into NES's and SNES's to let you use their Bluetooth controllers, or these guys, so let's go ahead and set that up right now We've got a retro receiver already plugged into the NES, we just need to set it up to sync, so I turn the controller on, put it in retro receiver mode Light blinking, there it is

And then we just set these guys up to sync, and it should just take a moment for them to connect Emphasis on should – [Narrator] Oh, so we haven't tested this at all yet? – No, but I mean, I did the same fix on both, – [Narrator] Oh, gotcha, gotcha, gotcha – Oh, there it is, hey (laughs) okay, took a little while, but it did do it, as you saw us, mid-worry But, there we go! So, just takes a second, let it breathe

Yeah, other than just the kinda general looseness of playing original Mario, where, he's just sliding everywhere, uh, this is working really well so far It just feels like using an NES controller, just without the cable One of the things that's cool about this too is that, while 8BitDo does make a lot of different Bluetooth controllers that are styled after old Nintendo stuff, the NES controller they have, isn't really an NES controller, it kinda looks like one, but they have added shoulder buttons, it actually has a four button set up It's all designed to where you could still use it with other systems, and it make sense In this case though, we actually have a true, NES setup

So, this was really easy to do, and it's actually pretty awesome The question is, whether or not it's worth grabbing one of these kits and doing it yourself, versus just buying a Bluetooth controller that's retro style And they have their ups and downs I mean, it's half the price of a lot of other Bluetooth controllers, which is great It was really simple to do, so it's any big investment there, but at the same time, especially with the NES controller, you're not getting as many buttons as a lot of Bluetooth controllers will have

So it kind of limits you a little bit in what kind of games you can play This is especially true of the NES controller, where you really just have the D-pad and four buttons including start and select The SNES controller on the other hand, with some shoulder buttons, and additional buttons on the side, can be useful for a lot of kind of retro style indie games, which are meant to recapture that era of gaming anyways, so it can work really well there Simply buying a brand new Bluetooth controller is the easy answer here, but if you already have an old school controller, and you like the feel of it, and you just wanna update it for modern games, this is for you