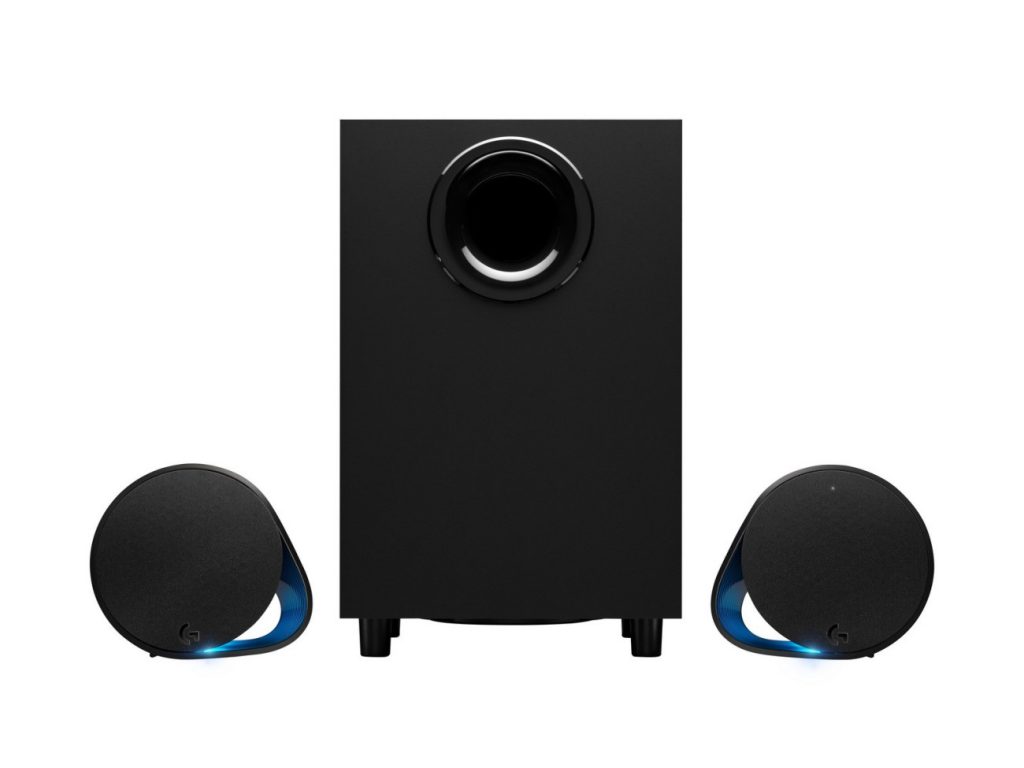 A Quick Note: you might have noticed that this review doesn’t contain photos taken by myself as per normal, rather it’s full of Logitech’s very own images. There’s a couple of reasons for that, starting with the fact that I was busy travelling then came down with the flu, and also because I didn’t manage to get photos I was completely happy with that showed off the lighting in a decent manner. Sorry folks!

These new offerings from the boffins over at Logitech have a hell of a lot to live up to, though, as I gave up my beloved Corsair SP2500 speakers to get Logitech’s shiny new G560s. For example, the Corsair SP500 came with a chunky remote that would sit on your desk, letting you very quickly adjust volume or tinker with the bass settings. The g560, though, has its controls built into the rightmost speaker, a potential problem depending on where you choose to place said speaker. However, the G560 also takes over the Windows volume completely, so you can always adjust the volume straight from the desktop. Of course, that’s not very helpful if you happen to be in a game or something. Considering the £200+ price tag of the G560 I would have liked to have seen a little desk unit for controlling the volume.

The point is the Corsair SP2500 setup I was using consumed huge amounts of space but the tradeoff was brilliant sound and a handy remote unit. I loved them, yet I really wanted to review Logitech’s new speakers and since I couldn’t get my grubby little mitts on a loan set for review I did the unthinkable and decided to sell my SP2500s to fund picking up the G560s. The reviews from several of the big tech sites were really favourable, after all, so hopefully I’d get to write about some cool tech and pick up an upgrade for my setup in the process.

The G560 speakers are rounded with a simple black mesh over the front. On their inside edge, there’s a curved stand that looks sleek and elegant. Overall they look understated and rather lovely. But this isn’t enough because this is 2018 and we absolutely 100% have to have RGB lighting options, which is why inside those luscious curves are customizable LED lights. And then on the back of each speaker there are much larger lights designed to illuminate the wall behind them, assuming you have your desk in front of a wall. Naturally the brightness of these lights can be turned down or even off entirely if you don’t want your room looking like a disco in the 90s, but personally I loved having the soft glow they created. Then again, I’m also one of those people that likes having lots of RGB stuff so that it can all match.

What I’m saying is that I found the G560 speakers to be very, very sexy, like a beautiful woman wearing lacy lingerie that has in-built RGB lighting in the straps. They catch the eye, yet the lighting can always be turned off if you fancy something a little less brash and more subtle. I’m talking about the lights on the speakers here, not the imaginary woman. Keep up.

All this lighting is controlled via Logitech’s very own software that must be downloaded from their site. From here choosing the brightness and colours is a doddle, as is deciding whether you want some fancy colour cycling. I’ve really got no complaints here; it’s an easy piece of software to use, even down to the fact that you can reprogram the G key that handles lighting brightness if you really want to. I have no idea why you would, but you can.

You can also activate one of the more intriguing features in the form of screen sampling. Essentially the speakers use four areas of the screen that you can select to base their lighting on. By default, it’s the very edges of your screen that are selected. It’s an interesting idea that’s intended to help with immersion by creating the impression that your screen is bigger than it actually is, a sort of trick that fools your peripheral vision. In practice, though, the system is too aggressive for my tastes and in games or games it can often wind up looking more like a disco as it switches between colours and intensity. I feel like it works far better on something slow paced or with a relatively limited colour palette.

But enough of the looks! How do the damn things sound? Via the USB connection you get 16-bit 4800hz sound resolution, and boy do the speakers and chunky downward firing bass unit pack some impressive sound quality. Some tweaks really need to be made before you get to properly enjoy them thanks to the bass being massively overpowering on the default settings and the rest of the preset profiles just being okay. Once you do a little bit of playing around you get something really special. The bass packs a nice punch where it’s needed, there’s plenty of detail across the lows, mids and highs and a slightly warm signature that I personally liked very much.

So, the speakers look great and they sound brilliant. Surely everything is okay, then? Well, not quite. As it transpires the G560s have a couple of big issues holding them back from true greatness.

The big one is that they’re just too damn loud! I’m not even joking. Even turned all the way down to 8-15 they’re powerful, and above that it becomes insane. Because of this, the volume adjustment is pitifully limited; 8 is too quiet, 10 is too loud and so on. Trying to find a good level is like trying to find a microwave setting that doesn’t leave your food cold and horrible or turn it into a boiling pit of lava that will melt the flesh from your bones. This seems to be an issue with the software and Logitech have said they’re working on sorting it, but the speakers have been out for a few months now and no fix seems to be coming.

There’s also a potential issue in how inconsistent the volume seems to be. Sometimes I swear there’s a much bigger leap from 12 to 14 than there has been in 4 to 6 to 8 and so on. The volume suddenly seems to jump upwards like it has been kicked in the crotch by someone wearing steel-toed boots. Again, these problems NEED to be resolved. They should never have been present at launch, and while an update or two has promised a better volume curve and other fixes there’s still considerable work that needs to be put into making these speakers more usable.

Finally, and I could be imagining this, but it sounded like the speakers were boosting the bass at certain points along the volume, specifically at around 14. It’s like the curve of the bass volume hasn’t been properly matched to the overall volume curve, creating a dissonant.

You can sort of fix some of the problems by hooking the G560s up using the 3.5mm jack instead. The volume curve is considerably less savage and likely to destroy your precious eardrums, and the speakers are no longer terrifyingly loud at even the lowest settings. However, you wind up with some annoyingly tinny sound instead. You could potentially get around this by hooking the speakers up to an internal or external sound card, but that’s an inelegant solution to an issue that shouldn’t exist.

Those are some big problems for a set of speakers that cost over £200. Thus far a quick browse on the forums indicates a lot of people having issues and Logitech have been poor with their communication. Only a few helpful Logitech employees seem to be trying to help people out and offer people some details on when potential fixes might be coming, but the company as a whole seem to be taking the approach of ignoring the irritating customers.

Aaaaaagh. These speakers are so immensely frustrating. I love how they sound, and I love how they look. The quality of audio matches that of my beloved Corsair SP2500 without the speakers and bass unit being as space-consuming. But the unresolved problems are huge and there doesn’t seem to be any real guarantees from Logitech that any of them are going to get fixed. Perhaps most annoying of all is that all of the other reviews from big sites seem to have completely ignored these issues in favour of heaping praise on them while hundreds of people trawl the Logitech forums in hopes of having their pleas answered.

If these problems get fixed then the G560s would become an instant recommendation from me. They really do sound superb, have a lovely aesthetic without the RGB lighting and are pleasingly eye-catching with the lights on. But man those problems with volume and control are just too large to ignore. For now, avoid these speakers. Maybe just go and look at some pictures of them every now and then until you get confirmation that Logitech has sorted them out.