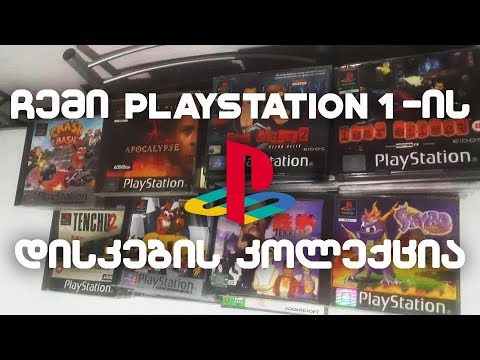 Hey everyone In this video I'd like to show you My PlayStation1 (also known as psone here in my country) Game collection, Which I'm collecting for a while now and the first game which will the start the video will be "Fighting Force" also known as "Street Fighting" in my country Before we move onto the next game in collection I'd like to show you, how the official PS1 game looks PAL one to be correct The first thing we see here, is – Playstation official hologram seal of quality Playstation official hologram seal of quality and also PlayStation letters engraved on black part of the spine

and also here as well PS1 PAL games are known for its thick cases Which are, unfortunately very fragile and each game comes with such little book – "manual" instructions for the game "manual" where you can read some instructions for the game some info about the characters some back story, how to play the game, etc also every PS1 game disc had a black layer behind it and with this criteria we can also easily differ official and bootleg games Next game is – Legendary – Tekken 3 Wipeout 2097 Very cool and fun racing game set in future setting, from developers – Psygnosis Duken Nukem 3D PS1 port The first WipeOut Legendary – Dino Crisis the first one one of the best survival horrors on the system after Resident Evil of course DOOM styled FPS set in the ALIEN universe Iconic DOOM loved and known by everyone PS1 version was a bit different because it had dynamic lightnings and soundtracks done in Ambient style The sequel to the famous Medal Of Honor on PS1 A very interesting stealth game set in medieval Japan Timeless Classic From Neversoft, who brought us the classic Tony Hawk games the last Crash game released on the system as you can see, this one's Platinum version if the game sold well enough, it automatically entered the Platinum list the downside of owning platinum is that it's missing the disc artwork it's all in silver color apart from regular releases, platinum styled games are less to be desired in any collection platinum styled games are less to be desired in any collection because of this downside however most black label versions came with a bonus Demo CD Gran Turismo 2 a 2 disc game on first disc we have just arcade racing and on the second we have a GT mode simulation the very first Medal Of Honor game one of the best shooter games on the system interesting mix up between Chinese mythology and Cyber-punk plays like classic Resident Evil with interesting story and characters as well Now, this game, as the previous Fear Effect is 4 disc based the reason behind 4 discs was, that, at that time CDs couldn't fit all the big information such as – Long cutscenes and etc

and therefore game was divided into four discs I will explain how it works, when we get to the very specific part of the game, it asks us to change the disc we change it and continue playing PlayStation Underground Demo discs by that time, in 90s all playstation magazines had bonuses like that – Demo CDs etc which contained different demo versions of different games interviews with developers, videos etc my copy is missing the 2nd disc however as you can see, when I got this it was in MDK Soundtrack case but here's the game itself need to replace the case someday one of the best racing games ever made, after Gran Turismo of course my copy has a bonus – Ridge Racer HI-SPEC demo CD This is how NTSC copy of PS1 looks like as you can see on the left side of the artwork, it says – GREATEST HITS in green meaning it also sold well enough Parasite Eve refers to itself as an interesting mix up between survival horror and RPG elements this is also a 2 disc based game Unfortunately, first one was only released in USA so therefore I own the NTSC version however the 2nd was released both in EU and USA as well That's also a 2 disc game of course

My copy came with bonus demo CD filled with lots of demos of different games from Autumn/Winter upcoming releases and the game disc itself also there exists Platinum version of Tekken 2, without a demo CD, in standard case Metal Gear Solid, another 2 disc based game on PS1 and with bonus Silent Hill Demo CD in which you can play first 2 levels of the game, if I remember correctly also another 2 disc based game here we have, disc 2 – Claire, Disc 1- Leon, meaning we can play different scenario for each character as you can see, aesthetically, game is very well designed and the last game in my collection, the very first Spyro game, which also comes with bonus Demo CD one of the best exclusive games on the system, ever released period, alongside with Crash Bandicoot well This was all for today If you liked the video, give it thumbs up if you wish more – collection type videos, comment below subscribe to the channel for other videos thanks for your attention, see ya!