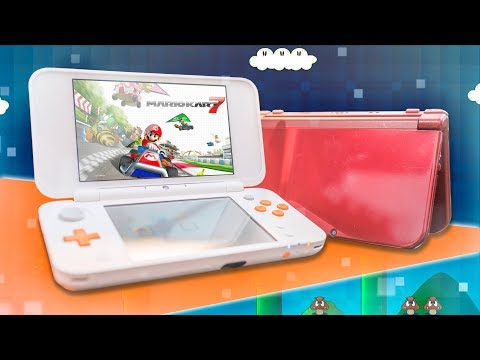 – Hey guys, this is Austin The 3DS originally came out in 2011, but in a world with the Nintendo Switch, should the 3DS still exist? So, if you want to buy a 3DS in 2017, you're going to be picking from one of these three options

To start with, we have the Nintendo 2DS, which came out in 2013 Now, as you might be able to imagine, this has a little bit of a different design I remember when Nintendo originally announced the 2DS I totally thought it was a joke So, in the transition from the standard DS to the 3DS, one of the major advantages was the idea that it did support 3D

However, the 2DS, not only does it look weird, but it doesn't support 3D at all That doesn't really bother me though, as I very rarely use that 3D feature to begin with So, there are a couple of other trade-offs here Most notably that it has a couple of fairly small displays and the actual speaker itself is kind of quiet But, when you consider that this only costs $80 and comes with a copy of Mario Kart 7, it starts to look like a pretty good deal

Take a closer look at the 2DS and it is a little bit odd looking So, this is the only DS or 3DS that doesn't have a folding clamshell design, which means that it is definitely not as pocketable But, on the flip side, if you're someone with larger hands, this is actually one of the more comfortable consoles to play on Next in the lineup, we have the new Nintendo 2DS XL Now this actually only came out a couple months ago and I did do a full video on it, but if you guys missed that, there's actually a lot of interesting stuff with this guy

Because this is a newer console, Nintendo are still rolling out some new colors, including this white and orange, which I actually think looks pretty nice But what I really wanna get my hands on is the Poke Ball Edition, which comes out next month Unlike the original, the new 2DS XL doesn't give up a lot over a 3DS So, you're getting those larger displays, you're getting the upgraded speakers, and of course, it'll actually fit in your pocket There are also some nice upgrades like faster internals, which help with load times as well as give you a couple of exclusive titles

And, you do have Amiibo support Long story short, this is actually one of my favorite 3DSs you can buy today Which brings us to the only actual 3DS here, the new 3DS XL Open this guy up, and we'll see the same quick start information and AR cards, as well as the console itself What you don't get is an A/C adapter in the box, which is weird considering that this is the most expensive 3DS you can buy

I will say though that some of the limited editions, such as the Samus edition 3DS XL, look really nice So, this originally came out in 2015, at least for the non-special edition version What you got here was very similar to the 2DS XL, except with facetracking 3D I do have to admit, this looks really cool But, the problem is, is that for only an extra $100 you can go all the way up to the Nintendo Switch, which makes the 3DS XL kind of a hard sell

If you've never owned a 3DS or just haven't played in the last few years, then there are a lot of great games for it Mario Kart 7 is one of the earlier 3DS games, but it still holds up surprisingly well, especially considering that it comes for free on the 2DS So, I will say that I'm typically a fan of a little bit more simulation-style games, like Forza and Gran Turismo, but it is really hard to argue with just how much fun Mario Kart is, even though 150cc is not my strong suit It is hard to talk about a Nintendo handheld without mentioning Pokemon This is the series that keeps me coming back, and there are so many great games available, including the upcoming Ultra Sun and Moon

But, the original Sun and Moon are also not too bad This is a game that I've actually put a fair bit of time into, and one of the things that's actually nice about playing it on the 2DS is that, even though it does have a smaller display, it's the same resolution as the bigger ones, which means that, this actually looks a little bit sharper than playing on the 3DS XL or 2DS XL On top of playing pretty much all of the Pokemon games for the last 10 years or so on the 2DS and 3DS, you'll also have a couple in the Virtual Console, including Red, Blue, Yellow, Gold, and Silver I grew up playing the original Pokemon games, so they definitely have a special place in my heart But, I've gotta say it is really nice to be able to play them on a backlit display with a headphone jack, having a battery

It's a lot nicer than the old-school Game Boys, I've gotta admit All 3DSs can also play original Nintendo DS games So, the only issues is, is that because the screen is slightly higher resolution than the DS screen, you're either dealing with a little bit of blurry upscaling or you just can't use the entire display for the games But, in return, you're getting one of the best handheld libraries of all time The games really are why you should consider picking up a 3DS in 2017

Sure, Nintendo is slowly bringing a lot of these franchises over to the smartphone, but at the end of the day, there are a lot of games that you just cannot play anywhere else besides the 3DS I think it's only a matter of time before the Switch totally replaces the 3DS But, for now, I think it makes sense why this exists in 2017 There are still new games coming out for it If you just wanna play through a few DS or 3DS games, then the original 2DS is not a bad pick up

For $80, you're only a single pair of headphones away from having a pretty solid gaming experience My favorite 3DS isn't actually a 3DS at all It's the new 2DS XL So, if you're okay with giving up the 3D display, which personally I just don't find all that useful, you're pretty much getting the full experience here, and it's cheaper To be fair, the new 3DS XL isn't exactly a terrible pick up, but at $200 it is so hard to justify picking this up when the Nintendo Switch is only $100 more

Unless you're a hardcore fan who really likes these special editions, I would go with the 2DS or 2DS XL So, what do you guys think? Should the Nintendo 3DS still exist in 2017? Let me know in the comments below, and I will catch you on the next one