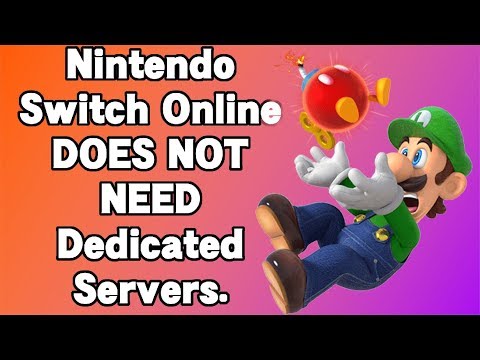 So, Nintendo Switch Online’s looking worse and worse as it’ll inevitably become a paid service It’s got problems and all between limited cloud saves, lack of enticing offers, enforcing the heck out of its god-awful app, going back to friend codes and ditching usernames, but I wanna talk about one specific issue

I’m talking the connection and network issues as thousands upon thousands of fans keep reiterating that Nintendo needs dedicated servers This is NOT true I’d bet money on this; a bunch of fans, humongous Youtubers, lots of big influencers constantly keep restating over and over again, that dedicated servers should be Nintendo’s top priority but it’s a misinformed claim that’s continuously being championed It needs to stop because dedicated servers are not what Nintendo’s online service needs Misinformation, hogwash, gobbledy gook; it’s fake

It’s false information that’s spreading like wildfire and it’s seriously not what Nintendo needs to be hearing Why you may ask? The short and skinny of the whole network issue is that Nintendo’s online quality has been highly unstable and shotty since day one Lots of Nintendo games use Peer 2 Peer connections, to which online connections are based on the players, obviously Smash, Splatoon 2, ARMS, Mario Tennis, etc all use them

If one person has bad internet, it could ruin the connection for both players Dedicated servers wouldn’t fix that either It would definitely offer improvements to certain games, it all depends on the game you’re using it on and how well the server’s built, but investing to dedicated servers isn’t an immediate fix nor recommended in Nintendo’s case given how many popular games rely on P2P connection Mario Kart and Splatoon 2 might benefit from a server considering those games involve connections of a bunch of people and one bad apple could ruin it for the whole orchard, but not only is it not a guarantee it will, it could end up being badly implemented like the P2P setup Smash Ultimate is definitely not gonna benefit from dedicated servers, I can tell you that much

People with good connections can still encounter lag and disconnects because of the other player possibly having a bad connection, but especially the net code for the game itself needing reprogramming as well as the possibility of the servers themselves not being properly structured CS:GO and Overwatch use dedicated servers, but that's b/c they're made for having higher tick rates and supporting a lot more players in a lobby respectively than the Switch can handle for either scenario It wouldn't use that extra information dedicated servers provide anyways because the Switch can’t even support it A game like Skullgirls, an indie fighter, uses P2P connections with almost no problems at all across multiple platforms Mainly because it uses GGPO, which stands for “Good Game Peace Out” and what GGPO is is middleware

It’s used to make it easier for software developers to develop input/output in gaming and communication GGPO was made to create a near lagless connection for online Injustice 2 and Brawlhalla have the exact same thing Dedicated servers would add an extra input in the connection, potentially increasing the amount of lag and it wouldn't benefit those who are very far away from the servers themselves either It's primarily why most shooters, fighting games, 1v1 games, games with a smaller number of people, etc

use P2P connections so games like Smash especially, but also Mario Tennis, ARMS, and Pokken Tournament, would not benefit from dedicated servers Mario Kart and Splatoon might, but that’s 2 out of the multiple other online playable games on the Switch, first party, third party, indie, and future releases to come The reason why Nintendo games and games on Nintendo platforms struggle with connections is because the networking code isn't properly stable and it needs extra structure and reprogramming to keep connections smooth Net code is the portion of the game’s code that’s directly responsible for multiplayer and networking In most cases, middleware IS the net code

Microsoft and Sony use P2P for most of their games as well with little issues in comparison and they provide a much more reliable online experience I feel people forget this often Nintendo games or games on Nintendo platforms have had worse luck because improper net code is the real culprit, not P2P connections and not the lack of dedicated servers In Smash Bros case or most fighting games / 1v1 games, they use P2P connections because it involves a small number of players, they value low latency over the game state being consistent and there’s not a lot of game data across the two clients being distributed

Dedicated servers would be counterintuitive for most of the games on the Switch as it would add an extra layer of delay and lag between the client and server, it benefits those who are closest to the server itself and less as you’re further away, and P2P connections can still work and function years and years later on their own Dedicated servers mean the game’s online capabilities last as long as the servers themselves, which are finite Destiny 2 uses P2P connections, Halo 5 used dedicated servers and ended up sucking hard Various companies and developers outside Nintendo have used P2P connections boasting great results along with some using dedicated servers and boasting bad results too The developers would have to understand the Switch’s hardware and software, understand the type of game and code it uses, and develop, adjust and/or update the game’s net code to be better suited for the Switch and its network functionality

Dedicated servers could help some games on the Switch and it could be made in the case Mario Kart, but you still have all the other online Switch games and it’s not a given of being stable The money we’re paying for could go for online dedicated servers since they’re not cheap to come by, but how worthy of an investment is it if a select few games would benefit from it as opposed to the thousands out there on the system and they’d potentially die sooner than fans would hope? Maybe the money will go to adding extra content and putting more resources in future content or future games We have no idea But putting that money towards stronger net codes, added middleware, could help benefit Nintendo a lot more in the long run than dedicated servers People really need to stop spreading that false claim of dedicated servers will make the online experience better for Nintendo

Because, no it won’t and we don’t know for certain if it’s already invested It’s not what Nintendo Switch Online needs I already said this in my Nintendo Switch Online Video What it does need is proper net code Along with a normal messaging option, native voice chat like Fortnite does, and a couple other things but today, I just wanted to focus on dedicated servers and net code specifically

Thanks for listening Stay super