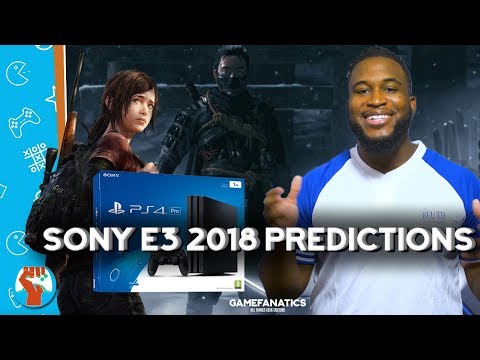 What do we think Sony has up its sleeves for E3 2018? We discuss right after the intro! Hi I'm Charles Powers, welcome back to the game fanatics If you're new here we produce high quality, independent video game content for gamers like ourselves, consider subscribing and even turning on your notifications, it would mean alot if you supported us in that manner

E3 Excitement is in full swing and in just days, Sony takes the stage to show us what's in store in the near and not so distant future for the PlayStation brand We've discussed some predictions for Microsoft's, E3showcase You can find those here, but what surprises could Sony possibly have? Perhaps Sony's biggest play this year is the deep dives Shawn Layden alluded to as he previewed Sony's E3 2018 presser for the PlayStation Blogcast Whatever Sony has up their sleeve this year, let's hope at least some of these predictions come true The opener – lights fade, we hear a string orchestra playing

A spotlight falls on a group of Japanese musicians, similar to how Sony opened their show last year show off Uncharted: The Lost Legacy Once the music is finished, the spotlight goes away and we are introduced to a live gameplay demo of Ghost of Tshushima It's unlikely that We'll see the exact same reveal but The last time we saw Ghost of Tshushima was at Paris Games Week last year and there hasn't been any new footage since then it's safe to say Sony wants to start the show off with a bang and what better way to do so than with Sucker Punch's next big franchise since the Infamous series Okay, What about this one How about a price drop? At $399, the PS4 Pro is comfortably less expensive than the Xbox One X but a price cut at E3 would further entice gamers to experience exclusives such as God of War, Detroit: Become Human, Horizon: Zero Dawn and Spider-Man

This would of course cause the PS4 Slim to drop to $199 as the Pro would be $299 Playing The Last of Us Part II and God of War in 4K for only $299? I doubt anyone would turn that down We're also predicting a third party surprise! There have been rumblings about a Devil May Cry V reveal at E3 2018 and Sony looks to be the one delivering the big news Although there is no solid evidence of this, it sure feels like it would be something both Capcom and Sony would do after the Street Fighter V deal Can Sony and Capcom make lightning strike twice? Bare with me here

We see a Dreams level decked out in Bloodborne aesthetics There's a Hunter walking around what looks to be an Eastern land He has a Saw Cleaver as he tears through a mob of enemies The crowd is going absolutely wild at this point The hunter approaches a fog wall and as he crosses through, the screen fades to black and we see the words, Dreams

Available Now, Play this Level tonight! But we're not done yet We hear the same saw cleaver transform and the words, From Software show up We are then treated to a Bloodborne 2 reveal and the internet finally explode Wouldn't that be nice? Let's go ahead and wrap up the show YOU KNOW WHY WE'RE HERE! Fade to black the show closes with a 13-minute live gameplay of, what is it? What ever could it be? The Last of Us Part 2! two Ellie will be the playable character as she confronts a terrifying new clicker type

The demo will end with the reveal of Joel's fate Although we won't get a release date, we will get a release window of Spring 2019 again, The crowd goes wild Sony announced a ton of games in previous years, and because of this, we know what pretty much all of their first-party studios are up to This is both a blessing and a curse because, on the one hand, we know exactly what to expect, but on the other, hand, it leaves Sony's future showcases rather thin since there isn�t anything new to announce

I'm personally okay with revealing projects early as long as we get updated on a consistent basis You also run the risk of showing games multiple times like Days Gone or Watch Dogs which had numerous E3 appearances which I am not a fan of I am not a fan of Whatever Sony decides to do, we have to be content with seeing world premiere gameplays of Ghost of Tshushima and The Last of Us Part II Death Stranding may receive another in-engine trailer, but I doubt we'll see any raw gameplay of that yet

Okay, so what are your predictions for sony's new press conference? Share your thoughts in the comments below If reading is more your thing, go check out the full article on thegamefanaticscom The crew and especially Carlos would really appreciate it Thank you for watching

As always I'm Charles powers I'll see you in the next video until then keep calm, and game on!