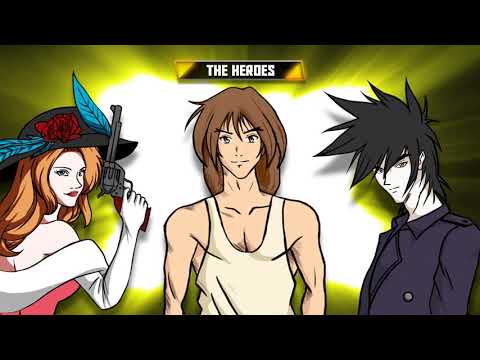 Hey, guys, Are you ok? My name is Filipe Amilton I am a graphic designer and founder

of Kalligraph Design a company that develop games I'm here today to present a proposal for you of a game "Beat and up" like the arcade games of the 80's, but with RPG elements I will present to you the proposal So guys, this is the game logo proposal, right? can be changed will be a "Beat and up" game in 2D With traditional animations from frame to frame and this ends up taking a little time to be done

I was going to need assistants to help to finish the other enemies and the other characters This is one of the level of the game that It's almost ready elements of the quests than the character must do, and the other characters are enemies goals and will be more or less this view of the game in this perspective There we have the dialog boxes that will have in the game This is a test of movement in the character programming only a test well basic so just to see how it will react but needs to be more polished he is with the middle moves caught still but in time it will go adjusting that It's just a very basic test And these are the heroes of the game, the three main characters and the villains who are just a few who are being presented there will have more, because the game will have around 10 more stages or less and will need more more bosses in the game This is a menu proposal, menu items of the character he is collecting during the game to evolve your character these are the control menu the xbox version and the mobile version will not have the PC version too but it will be in list is simpler to do the part visual And this is personal if you guys they liked the proposal and only enter INDIEGOGO and give a support for us Thanks s2