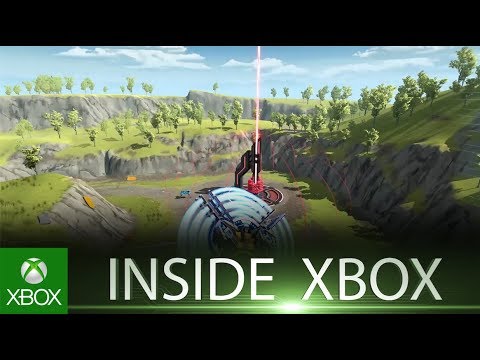 ♪♪ -"Robocraft Infinity" is really that childhood dream of being able to build LEGOs, take them into battle, and fight them with other people, except instead of your imagination, you get to do that online We've got hundreds of parts, movement types, weapons that you can put together with a bunch of different building cubes and just create these really amazing robots online that you can then take into battle and really prove your stuff with other players

♪♪ ♪♪ So, the origin story for "Robocraft" really comes with our CEO Five or six years ago, he was playing "Minecraft," obviously a big fan of any UGC kind of product, has also studied physics at university, and really wanted to find a way to bring a game which offers the whole building aspect and freedom that "Minecraft" offered as well as including some of those physics aspects -I loved playing around with the physics simulation tools you find in game engines — springs, hinges, rigid bodies, those types of things

And the blocks gave us a way to take the complexities of a physics engine and allow anybody to build What interested us about user-generated content was we could create platforms which would allow players to make our games much bigger than a development team could ever make on their own -So, he created a demo for "Robocraft" and showed some of his friends who worked at a studio with him And they decided they loved it and left the studio and started up their own company to kind of create it -And then we introduced it as a prototype with the community, and the community helped us shape it

And together with the community, we've built what we have today [ Alarm beeps ] [ Lasers firing ] For new users coming to "Robocraft," I would give a number of tips -If you're really uninterested in building but you really want to try someone else's creations, you can use some of the initial starter bots we give you, earn some money in game, and then take it to our in-game store, which other people can upload their robots to -The Robot Factory, which allows players to upload robots that they find are good and share them with the community So, if you're struggling for inspiration, you can go to the Factory, download one, and that'll help you get into the game, too

-Otherwise, we do have features for people who like to build themselves So, we have the Body Builder feature, which helps build a general guided plain body of the robot that you'd like to build -So, cars, tanks, mechs, and basically creates them for you You choose the front of your robot and then the back of your robot And then you take it in and customize it yourself — decorate it, put wheels or tank tracks on it, put weapons on it, and then you can take it straight into battle then

-And the big thing in "Robocraft" is just to build, test, build, test, and just enjoy that process Take it into battle It doesn't matter if you do badly Just iterate ♪♪ -We wanted a chance to create "Robocraft" how we always wanted

On the PC, we've been iterating for years and years and years So, we wanted a fresh start, and reimagined the game -Remaster it, to polish it, to improve the balance, to allow people to create bigger, more creative robots, to allow a lot more creative freedom, and, obviously, to make it all work in a polished package for the Microsoft console -Xbox really is an indie-friendly platform So, when it came down to a choice of what to choose from, I think going to Xbox as our first console made sense

The ID@Xbox team has been fantastic, as well, and has really helped us kind of push the game to be what console players would expect -It's like a-a rebirth of our best love The community's always led our decision making and the things we've added and the way we've shaped the game And Game Pass was a great opportunity to just bring "Robocraft" to a much bigger community -I mean, you've got hundreds of thousands, if not more players who are looking for extra titles that they want to play, and they really get that opportunity in Game Pass

-To be able to then feed off of those community to help us shape and improve the game on the Xbox, so that was a great opportunity for us ♪♪ -My favorite robots and the craziest robots I've seen are things that people have come up with on their own So, you can imitate other things So, you can create Master Chief, for example, or some other franchise characters But the best ones are things you come up with yourself, so, uh, the crazy ostrich with a top hat and a monocle

-My favorite one would have to be one that was created by a community member called Cluly And it's called the Cluly Ball It sounds kind of boring, but it was actually just this flying armored sphere full of guns that really wrecked face in game Funnily enough, he now works for us as a designer on "Robocraft," so he definitely created something that impressed us -I'd like to see people really go out there, build something unique, and then share it with the community

We've got a hub that people can go in and post pictures of, and, you know, we'll be doing competitions, as well, so, you know, really let your creative juices flow -Have fun with it Go crazy Build something mad and wonderful and beautiful And I think you'll have a good time