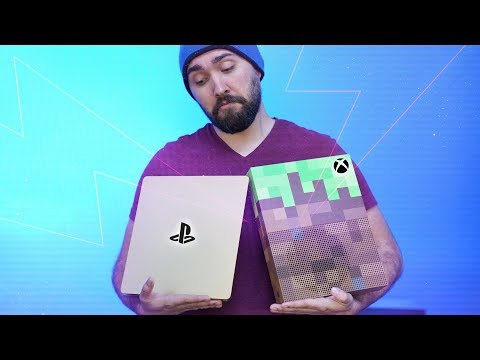 (upbeat music) (buzzing) – I love both Xbox and PlayStation consoles a lot, but based on price point and current evolution of gaming hardware, is it really advisable to get the Xbox One S or the original PS4 or PS4 Slim in 2018? So there's a lot of variables that effect whether or not you should get a system right now And it's kind of a weird tipping point because we have these newer sort of mid generation consoles with the PS4 Pro and Xbox One X which are more powerful and get more out of having a 4K TV, but not everyone needs that

But at the same time, we're also getting to this point where we might be seeing new consoles in another year, year and a half And that brings up the question is, if there are new systems, are they gonna be backwards compatible? If they come out and they're not backwards compatible, are the current systems gonna have a price drop? There's a lot of stuff that can affect whether or not you wanna buy one My advice right now and this honestly comes from a part of me that just is all for having fun, is if you wanna get a system right now, still go for it The One S and the PS4 Slim are still great systems If you're able to afford and bump up to one of the pro level systems and you have the TV to make use of it, great, but at the end of the day the main reason to grab one of these systems is to play great games that are sometimes exclusive to one of them

Like if you wanna play God of War right now, I don't think you should wait a year and a half just because you think maybe a price drop will happen down the line or maybe a new system will be backwards compatible I'm all for just grabbing it and having fun right now so you don't miss out Who's better at collectors editions, Xbox or PlayStation? Well first off we have to talk about what we mean by collectors editions 'Cause if we're just talking about games, it's a little one sided at the moment 'cause there's just a lot more exclusives on Sony's side And even when Xbox does have exclusive games like Sea of Thieves, they didn't even do a collectors edition for that

But if we're talkin' about systems, Xbox hands down Just whenever it comes to aesthetics in general, I think that's something that Microsoft has really nailed down that Sony hasn't fully gotten yet I think that there are some good looking Sony special editions, I like the Monster Hunter one, the God of War one really grew one me, but you compare that to what Xbox has done with say, the Minecraft design one, or even just the different colors and even just the design of the system in general Just Microsoft is so much better when it comes to aesthetic So collectors editions on games, PlayStation

So cold hard logic, just go digital You can get the game right away as soon as it launches, you don't have to go to a store, you don't have to wait for something to ship, you're able to play it right away And if you wanna switch between multiple systems, as long as the game's installed everywhere, you're saved data is gonna be able to move with you really easily But on the other hand I'm a dinosaur – Yeah – There's a dinosaur

– And I probably have a bad habit of collecting things So personally I still buy pretty much all my games physically I've given in a bit on the Xbox One if I'm getting a big triple A game, but anything on PS4 where it's a series that I love and I've been building up a collection over time, I still buy physical Which I admit, gets a little annoying sometimes 'cause I am switching between systems often, so I have to carry disks back and fourth, back and fourth But I'm stubborn so I'm stickin' with it

What is your favorite Nintendo game ever on any Nintendo console? So I grew up on the Super Nintendo I have very vague memories of the NES but that was more something where it was in the house, my brother played it The Super Nintendo system I really have really clear memories of actually playing games first hand And to this day one of my absolute favorite games from that console is Legend of Zelda: Link to the Past And it's still my favorite Zelda game that was ever made

It's just this really good balance of, it had some aspects of the very original Zelda, where it's kind of open ended It's a little non linear, you don't have to do things in the exact order And you're kind of encouraged to walk around and explore and do stuff at your own pace But at the same time, it was still a little more structured than the original game And gave you at least a few more hints and backstory and kind of fleshed out the world a lot more

I still enjoyed the Zelda games that came after I loved Breath of the Wild, Ocarina of Time, also great games, but there's just something magical about the right perfect balance that Link to the Past hit that I just can't get over It's to this day still my favorite first party Nintendo game What is the best game of 2018 so far? So I haven't beaten this game yet 'cause it just came out on Friday and I've been multitasking a lot But I've put a lot of time into God of War and honestly I can still confidently say that as long as the ending isn't totally messed up, it's definitely the best game of 2018 so far

I had the same kind of thoughts about Far Cry Five until the ending, but that was a mess I've at least heard that God of War ends better So as long as it maintains the same momentum, I am loving it The combat is fantastic, I really love the shift in plot and game style It's just overall a huge improvement for the franchise

Now as far as games I've actually finished this year, Radiant Historia on the 3DS is really good It's actually a remake of a game that came out back on the DS, but it is one of my absolute favorite JRPGs If you're a fan of the genre and you haven't played this game yet, check it out I love it What is the thing you want the most from E3 2018? Elder Scroll Six I have been a huge fan of the franchise ever since number three, Morrowind, which is basically one of my still top favorite games ever

And while I didn't enjoy four and five quite as much, they're still really good They've kind of deviated a little bit from what I love about Morrowind But they're still awesome games Clearly, Skyrim did really, really well And so we've been waiting a while for six to happen in some form

We gotten in MMO, we've gotten Skyrim re released however many times with new modes and VR and portable whatever It's time Even if it's not coming out 'til 2019 or 2020, I just want news, info, a snippet, something 'Cause I need that to happen And I need it to be weird again

That is the biggest problem I had with four and five is that they went to more traditional kind of medieval stuff that we've seen in all kinds of fantasy Morrowind was weird And there are other weird settings in the Elder Scrolls universe So we need six, we need it to be weird, I want that info now