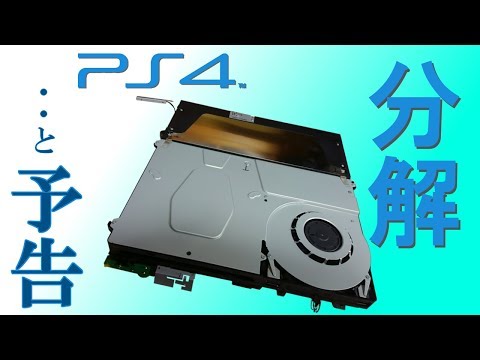 Motherboard, Disk drive, Fan, Power supply etc All parts are tied up Their rigidity is ensured by these parts It is sandwiched between the upper and lower cases It is a very reasonable and sophisticated structure The appearance is very simple All the screws are hidden and it is cool

In disassembling PS4, it is this screw to remove first However, by peeling off this seal, not only guarantee but also repair of paid fee is denoted as refusal Human wants to do it when it is told not to do

that's a joke However, this is PS4 shortly after I bought it Even if I am a fool, unless I have "My circumstances" I will not unlock the seal

About the "circumstances" at the end of this video Well, I will return to disassembling work When peeling off the seal, the letters "VOID" are inscribed like this It never disappears again Torx screw under the seal

Next, I will remove the HDD First, remove the cover that is fastened by the fastener By the way, only HDD can be replaced without peeling off the seal I remove the screw on the back side of the body It is OK with a Phillips screwdriver here

And from the side of the body Pull the knob I can remove HDD with mounting stay This has also been replaced by SSD due to "My circumstances" If you remove the HDD from the mounting stay, remove these four screws Remove the Torx screw on the sealed part

Fighting, a few minutes It was out Because it is fastened with multiple plastic fasteners I spent more time than I imagined Do I damage the cables etc?

Well, OK! Let's take off the chassis screws There are dozens of screws in PS4 as a whole Standards and lengths are also various

Even if that person has confidence in his memory ability It is very difficult to memorize all the positions of screws So, marking, taping

Let's record without fail by any means In my case, the "rate of forgetting" when not recording is 100% If pierce the part with the wrong screw, in the worst case it may be damaged

By the way it is okay to remove the wiring later Once the screws are disengaged it will be possible to remove the upper case Although white and flat flexible cables often see this type of It is a weakness as it looks Disconnection, Pattern peeling etc So be careful not to pull it in and out repeatedly or bend strongly Then, remove the upper case Like the lower case, it is fixed with plastic fasteners

Be careful not to know the structure before disassembly Yes, it was removed Only the shield plate attached to cases

As a result, I got the middle part as explained at the beginning of this video I have never seen a game machine that does not have flab so much

Well, once gently strapping hanging cable with tape I will remove the screw on the top side of the body Do not forget the marking of the screw

OK, it seems to be able to remove the power supply I could remove it Still, carefully as power supply and antenna wiring are connected Wow the connector connecting PS4 and power supply is hard and can not come off Hmm May I pull strongly

Somewhat OK Even so, this power supply connector is difficult to remove

A few minutes to fight again I tried to remove it carefully with a flathead screwdriver I could remove it! This is power supply unit I fought hard on this connector Oh

Is this the insertion slot of the famous(?) "Blade"? It features a large connector similar to a Japanese household outlet Here is the Blade of PS4 body side It is quite a big connector

I feel the excellence unique to the high power machine Is this really a game machine? This power supply unit makes DC12V and DC48V required for PS4 from AC100V for household use Also, the 12V side is not always output, it receives and outputs the signal from PS4 12V, 13Amps

Power-saving model, right ? This is realistically hiding features PC with a conscientious price Oh? The motherboard is exposed It was The iron plate remove during the fight with the power connector (Removed iron plate -> ) On this back side there is the PS4 brain, APU

With this funny shape fastener, the heat sink for APU is fixed from this side And, to surround it, eight memory chips are arranged Since each memory is close to APU, access efficiency will be advantageous Turn over again Let's explore from the top side The screw position is properly marked Ready, set, go! Oh this is a beautiful heat sink I strongly feel that the position and shape of the fan is also a special purpose machine I just bought it, so there is no dust in it Shining brightly

A very beautiful heat sink The inside is also a handsome PS4 Well, disassembling is resuming

I will paste the small parts in places easy to understand so as not to lose them For now, I could see the power connector of the BD drive, so I pulled it out which one can be removed next? I decided to remove the motherboard Remove the heat sink fixture explained earlier

It is staying with two very special screws Motherboard is removed And it should also be called the brains of monster game machines APU of PS4 covered with thermal grease appeared It's Cool! It seems that the screws of the last chassis are all off The goal has finally come to light Remove the BD drive Remove the Fan Disassembling is finished

It was necessary to disassemble to the last to take out this intermediate frame This frame is processed by "My circumstance" What is that "My circumstance" Past work, echo of integrated PS2 That far surpassed my imagination I got a lot of comments Is it expectation Is it banter You're joking, right? Is it an integrated PS4? It is stupid I was flattered I got carried away Different level from PS2 Once the power supply is completed It is half completed! I talked big that Expenses continue Wherever Substrate "Hakka" Me "Hakkan" Following the memory Young age Hey, Grandpa What is NOT circuit? Everyone may be pleased again Cutting plastic and grinding plastic and polishing and polishing plastic Adhering plastic and polishing and polishing plastic Crappy days on sweat and dust Pre-assembled test operation Soul-stirring Production period 16 months Housing precision UP Battery duration UP Production time UP Production cost UP Operability UP weight UP volume UP PS2U successor Thank you for always watching PS4U has already been completed

The shooting has been almost finished, and I am currently producing introductory videos Please wait a little more until video production is completed KEI SONY informal MOD