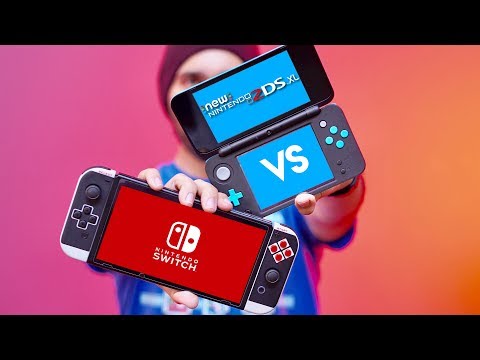 – About a week ago in Japan, and about a week from now in the US, we'll be seeing the release of the Nintendo New 2DS XL It's a very long name

Okay, so normally I skip over this part of an unboxing, or try to glance over it, but I actually wanna emphasize this It has a power cable Now the reason why this is important is for some reason, the New 3DS and the New 3DS XLs did not include power cables I think the assumption being that Nintendo thought everyone was gonna upgrade, it's only nine, ten bucks to get a power cable separately anyways The point is, it's honestly kind of annoying

So the fact that the New 2DS comes with one, thank you, thank you And then of course, we have the New 2DS XL Now, while this does have the 2DS name in it, it's actually really just a revision of the New 3DS XL, the big difference being aside from aesthetics, the fact that it lacks the 3D feature This is also a lot lighter than the 3DS XL I mean, probably 'cause they removed the 3D function, but like, you really notice it right away

I've used a 3DS XL before, and, it's much heftier But yeah, so there we have the inside So this is clearly a new DS design, let's actually break down where all the different stuff in the name means for people that haven't kept up with every single revision Nintendo's done to the system So, starting with New At a certain point, Nintendo started making New 3DSs, which is a very confusing name, but, it is a very different system

It is more powerful, so it's able to support certain games that the old 3DSs cannot It has additional buttons, like this stick right here and these two shorter buttons on the inside, and has a built-in NFC reader, so you can actually scan Amiibos directly on it, rather than having to buy an adapter Now as for the 2DS part, like we've already talked about, it supports 2D gameplay only, no 3D like the 3DSs do, although, honestly, that's a function that's been dying off more and more with every game release As for XL, well that's just no new fact it is the larger overall design, giving bigger screens for more viewability, and more importantly, really, if you're an adult, it is a much more comfortable grip compared to the smaller designs which can very easily give you hand cramps if you're over the age of like, 13 Now like I said earlier, the main thing that makes this one different from the 3DS XL, is the exclusion of 3D functions

But there's actually more to it than that, there's a lot of changes to the actual physical design of the system While it does look a little similar at first glance, aside from having this little border design and a little gradient here, which I actually really like the look of, this is a just better looking system to me Once again, I always love systems that have a two-tone approach, not just one single color But, one thing that's immediately kinda weird is the fact that it actually has a flap here for revealing the DS card Normally it's just an open thing that you just put in right away

Now you have to open this flap here which reveals not only where you put the DS cartridge, but more importantly, also the microSD Something that was really, really annoying about the New 3DS and New 3DS XL, is that the microSD slot was behind the backplate So I mean we have the audio off all right here Oh, stylus Which is really tiny, why is this so small? Okay, no

Honestly, I think this is a solid upgrade over the New 3DS XL My only complaint really being the stubby little stylus, everything else is perfectly fine I mean, yeah, it doesn't support 3D in games, but that doesn't really matter So few games actually make full use of it in an interesting way, and it's just, honestly, it's ended up being more of a gimmick than something actually functional And this thing beats the 3DS XL out in every other way

I mean, just the design of it not having stupid little designs like having the SD card hidden behind the backplate It's just a solid upgrade at a lower price But that's not the real question The real question is, in 2017, when the Switch exists, is it really worth grabbing the sixth version of system that came out back in 2011? Maybe Obviously there are situations where upgrading to a system like this just does not make sense

For instance, if you already own a New 3DS XL, or even just a New 3DS, this isn't gonna offer you anything interestingly different for paying $150 all over again for a new system Aside from being probably the best looking out of the group However, if you never owned a 3DS before, this is honestly the best and really final time you should be grabbing one And even if you own one of the original systems, it's actually kinda worth spending 150 bucks to upgrade to this I mean, there's a number of games that straight-up require a new system to work, such as Xenoblade 3D

There are other games that don't necessarily require it, but, honestly, run really terribly without it, like Hyrule Warriors And there are also a full catalog of SNES virtual console games that can only be played on new 3DS systems Ever since the Switch was released, though, there's been this ongoing question of, which exact systems is it replacing? Is it only replacing the Wii U? Is it replacing the 3DS? Is it both? And honestly, I think by this point, it's pretty clear that it's only replacing the Wii U I mean, really, let's look at what these two systems have in common They're portable systems released by Nintendo

That is it I mean the experiences from them are very different The Switch is much more traditional gaming that can be done at home or on the go, while the 3DS line is offering games that offer this dual screen and touch screen experience that is unique to it Now of course, you can make the argument, well, the Wii U also had two screens, the Wii U also had a touch screen interface, why is it that the Switch succeeds that and not the 3DS? And the answer is, well it didn't really make use of its touch screen in an interesting or meaningful way Made evidence by the fact that all the biggest games from the Wii U have been making their way to the Switch

If the question is, is it worth grabbing a 2DS XL when the Switch exists, the answer is yes If your question is, which one should I grab first? That's a little murkier Do you wanna spend 300 bucks and get the new hotness with all the new games coming out on it? Go for the Switch Do you wanna spend half that much money to get a system that has a library full of games six years in the making? Go for the 2DS Either way, it's a great decision, and honestly, it's worth grabbing both