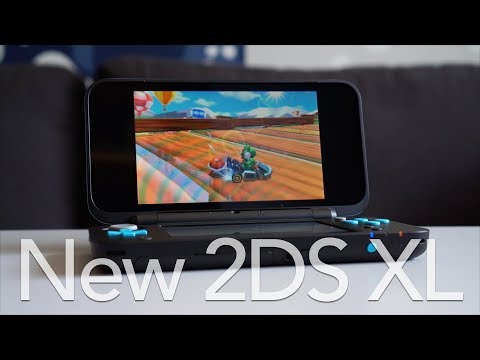 Hey everyone, it's Colin How's it goin'? With the Nintendo Switch being a portable console, one would assume it's the end of the road for the 3DS series

But there's a new member of the family, and it seems to fill a rather particular niche Let's take a look at the New 2DS XL [♪ Music – Intro ♪] On the outside, the New 2DS seems really familiar in a few ways It's a similar size to the 3DS XL, with about the same thickness and length, though it's a little narrower It has all the same exterior buttons and controls you'd expect: four shoulder buttons, a volume slider on the left side, and a power button on the front

The headphone jack is right in the middle, and the stylus stows next to it, though I think it's the shortest of any in the DS series Both the game cartridge and MicroSD card slots are on the front, but this time, they're covered with a flap It's great for keeping out stuff that doesn't belong, especially in the hands of a child But it's also annoying and tedious to deal with Another design change is that the New 2DS still carries stereo cameras like the other models, but they're on the bottom instead of back of the screen

Thankfully, the screen can open flat, so you don't have to crane your neck while taking pictures And as for that screen, as the console's name suggests, it only does 2D It's glossy with a glossy black surround It looks really clean, but sometimes reflections can be an issue The console keeps its front-facing camera and mic, though they're built into the screen hinge and don't rotate with the display

The buttons are pretty much the same as on the New 3DS, and the little C Stick is carried over too The touch screen seems like it's bigger, but that's just an illusion because the bezels are thinner, with the home button kicked over to the left side Finally, there's built-in NFC support for Amiibo, right in the middle of the touch screen Overall, the console is plenty comfortable to hold and use The bottom panel is all one unit, with no rough seams or panel gaps, and with its rounded corners, it's very smooth

The controls feel solid and the shoulder buttons got a little bigger to make 'em easier to use But there are a couple of drawbacks First, while the main display is pretty nice, at its size, it really shows the console's low resolution, especially when it's limited to 2D The image ends up soft and the backlight can seem a bit underpowered in bright light, though the color is decent and the viewing angles quite good Second, the stereo speakers ended up on the front, which helps give a clean appearance

But it does mean they fire into your palms when you're playing, so the sound gets a bit muffled The biggest concern for me with the 2DS XL is its value and where it sits in the product lineup The flagship New 3DS XL retails for $200 US, but can often be found for $175 Meanwhile, the orignal 2DS is a killer deal at $80, and even includes a game So with the street price of $150, I'm left trying to figure just who the New 2DS is for

It doesn't seem to be meant for kids, since it's almost double the price of its slab-shaped sibling, and yet not nearly as durable But it's also not that much less expensive than the New 3DS XL Though I should note that it does include an AC adapter in the box, which would otherwise cost you a few bucks Don't get me wrong, I really like the New 2DS It's a solid console, and aside from my few complaints, I think it has a great design

I especially dig the ridged motif on the lid, the black and teal color scheme, and the angled Nintendo logo, which all give a subtle nod to '80s nostalgia I just think it may have a limited audience for the price Perhaps someone who's looking to get into the platform and wants a good experience, yet doesn't necessarily care about 3D But the fact that the New 2DS XL even exists, just goes to show that Nintendo isn't ready to hit the brakes on the 3DS family just yet If you like the video, I'd appreciate a thumbs-up, and be sure to subscribe