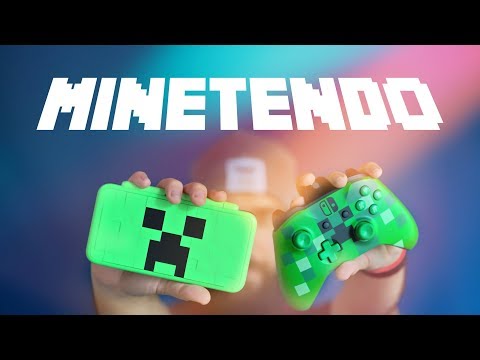 – This summer, Nintendo has been releasing a lot of different special edition DSes in Japan We saw the Animal Crossing design, there was also a Mario Kart that was just black and red, and most recently, they released this Minecraft edition

Which, I wanna know, it's kinda weird to have a Nintendo box product where, on the back it actually says Microsoft Studios But, in celebration of its release, we're gonna open it up, check it out, as well as go over some awesome Minecraft themed Nintendo accessories This design actually surprised me a little bit, because normally when you think of how a Creeper looks in-game, it's usually that cube, voxel design, where it has the multiple shades of green squares on it Kinda like what you can see on the box here, you've got the little different shades of green going on Whereas on this design instead, Nintendo went for just one single shade of green which is this kind of light, lime green, almost neon, kind of like what they do with their Joy-Cons and to create that square effect for the face, they created just little tiny shaved off levels

There's just a little bit of unevenness to the front that, up close, is a really cool little detail This really rolls into a lot of what I've been saying lately about Nintendo when it comes to special editions lately is that, at least for the DS line, they've really been learning how to start nailing down different special aesthetic designs I think it was a really good call sticking with the one color, 'cause it allows them to focus on a very simple and straightforward two color design You have the main lime green going on everywhere here, we've got black for the face, for the buttons on the shoulder, as well as all the text on the back, which does say Minecraft as well And then on the inside, the black plays really well with the D pad and the buttons along with the screen to create this really good two color design

You get a little bit of gray with the sticks, but that's pretty ignorable compared to some other special edition designs they've done in the past where there's always, like, an unnecessary third color or other things playing with it No, this is just a nice, simple, two color design that looks really sharp and clean Now this is not the only special edition Minecraft system that has come out Last year, Microsoft had their own Xbox One S design that was really intricate And I think it's really interesting to compare the differences in how these two were tackled because that design was very, very intricate

There was a lot of different colors going on, lots of little details that I really loved This, on the other hand, is a much more simple straightforward approach I do like the detail that went into the Xbox One but I think this did a really good job of just nailing the aesthetic without doing too much extra If you're a fan of Minecraft, this is an awesome little collectable pick up Sadly, however, they are currently only available in Japan

And while it isn't too difficult to import, DSes are region-locked, so, yeah, have fun with that But if you want just a collectable, it's a great pick up Now, there are a lot of other Minecraft themed Nintendo stuff you can grab, a lot of things for the Switch Let's take a look at some awesome accessories to just kinda fill out your Minecraft Nintendo collection First off, we've got a game card case from PowerA that can hold all of your Switch games

Now, me personally, I love grabbing as many of my Switch games physically as I can so this is a really handy way to carry games around Something too that I think a lot of people don't realize is that these are designed to not only carry all your Switch games, but they also have little smaller slots to where you can also add SD cards in case you use multiple ones Now, they do have a lot of different designs aside from the Minecraft one, but this one just blends in perfectly especially considering, well, shared themes going on here Oh, yeah, totally Well it's like, this green kinda matches this lighter one, but, yeah

Next, let's take a look at another product from PowerA, their grip designs And I've talked before about how I am not a big fan of Nintendo's official Joy-Con grips I just don't think the comfort grip is very, well, comfortable PowerA's is a huge upgrade though It might look a little similar at first, but the grip design is a little more contoured in shape it's more comfortable for your hand, and it's made out of a softer rubber

But what's really cool for this video, is they've done a whole bunch of different designs including a Minecraft one Featuring a diamond sword on the front, and what I think is a really nice touch, is actually matching that diamond coloring on the grip which looks so good By the way, if you're curious about these white Joy-Cons that we have in the grip right here, these are actually skins made by today's sponsor, dbrand They've made a whole line of Switch skins that are totally safe to use for the system You can get them for the Doy– the Doy-Cons? The Doy-Cons

dbrand Doy-Cons, what can I say (laughs) You can get them for the Joy-Cons, the Switch itself, or even for your dock You can get them in a whole bunch of different colors For today's video we've got the Minecraft theme going on, I really like the way the white looks in this grip, or if you want something for the Switch itself, I think the green does a great job of giving that feeling of a Creeper Now, if you wanna buy 'em, make sure you check out the link down below

Now, if you want a more proper controller design a really good choice, and this is gonna seem weird at first but trust me, follow along, and that's Xbox One controllers They've made two really cool Minecraft themed designs with the Creeper and pig There's lots of cool little details on these Now, there are a lot of different accessories out there that allow you to use an Xbox One controller with a Switch A couple big options are you can grab the 8Bitdo Retro Receiver, which is a really easy way to set it up, the only downside is you need to have a USB port to attach it to, so it's really only good for dock mode it's not gonna work for a tabletop setup

So if you want something that's gonna work on both I really like the Brook adapter This is something that attaches to the Xbox One controller itself, and allows it to be used as a Bluetooth controller across a number of different devices, the Switch included Really easy to set up, you just have to put it in the right Switch mode, plug it in, you do initial setup, and bam you have an Xbox One controller that works seamlessly on the Switch Personally, as far as modern controller designs go I find the Xbox One to be the most comfortable so being able to use it across a number of devices, especially the Switch, is just a major upgrade Hard out