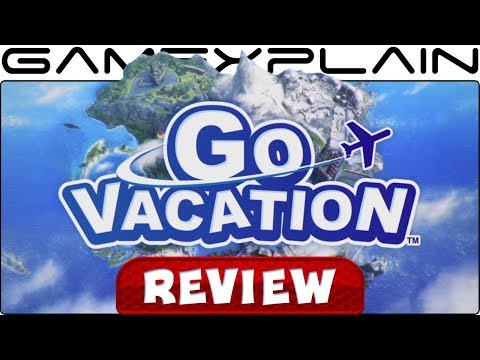 Many moons ago, when the Wii was inching towards its end, I played a multiplayer game that changed my perception The game in question was Go Vacation, a game that featured four pocket worlds and 50 activities to explore

It was a huge achievement for the system, and something that I found fun to play Now, in 2018, the game is making a return on Nintendo Switch Can everything that impressed me back then still blow me away now? Obviously not, but it is still a good time Go Vacation sees you traveling to Kawawii Island, where four resorts are waiting for you These are the Marine, City, Snow and Mountain Resort

Each come with their own ways of transportation, activities and pocket world to uncover There is a little something for everyone, which is quite impressive The game immediately steers you towards activities, but finding the nooks and secrets in the world will grab you even more Coming back to Go Vacation on a new system, it made me realise how this managed to remain entertaining I get a sense of joy by cruising around, doing the things I like and understanding the world Bandai Namco has built

There will always be a smile as I go with a Snow Tube to the top of the Snow Resort The pure adrenaline of getting down fast is enjoyable in droves After the thrill is settled, I just hop off and look around the area You really jump from moment to moment, which is honestly the best thing about it The activities themselves aren’t too bad either

You have your standard stuff like Tennis and Shooting Galleries, but there is also a lot of wacky stuff present like Water Gun Battles One thing I won't understand, however, is the removal of certain events With stuff like Dancing and Sword Fighting missing from action, I do miss some of the silliest fun I had with the original Initially though, the activities included won’t leave the greatest of impressions either You are presented with one run that you are required to play through

Once you get over that hump, multiple options and methods become available as a result A good example of this is Moto Fest It starts with a pretty easy and underwhelming car race, while afterwards harder courses and vehicles like motor bikes become available The approach harms the experience in my eyes You are forced to go through one pretty lame version until you get the fun stuff

Some players might not even realise that you get more to do after returning Even with this re-release, I will never understand how going one to a dozen possibilities makes sense Go Vacation forces the easy versions of the player to unlock more resorts, additional options and your fully customisable house The Kawawii Stamp Dash, as you the process is called, is completely unnecessary I feel Giving a family the full suite of possibilities would make it much more accessible for multiplayer

Because yes, Go Vacation really depends on its multiplayer component to carry you through While it is totally playable on your own, and there are tons of secrets to uncover, you would pick this up to play with friends The game supports up to four player split screen, which has seen a strong overhaul from the Wii release The independent movement performs better on Nintendo Switch, no matter the vehicle or action they are partaking in On top of a strong split screen experience, multiple Switch consoles can also be used together

Naturally, you will each need a copy of the game, but progress will be saved on your system Another important overhaul from the Wii game are the controls The developers went back and improved the controls in everything present There are now motion and button options for each of the games, and it is all mapped proper to the scheme you are using Some of the original Wii controls felt a little off at times, but a simple Y press to accelerate help the vehicle possibilities a ton

Even with just a Joy-Con, the stick and a few buttons are enough to get you going With that all being said, the lack of right stick controls on dual Joy-Con or Pro Controller is something I don’t get There were limitations how this could work on Wii,but there is no excuse for it on the new system The presentation, for better or worse, hasn’t been hugely updated Go Vacation can look striking at times, in particular doing evening sequences, but there are things that show it age

The plants are multiple laps of flat textures overlayed on each other, just to give an example The experience has been a resolution bump, which does give aspects that cutesy feel, but it just isn’t overly impressive The music and performance of the title remain top notch though, so I was able to look past these faults Go Vacation remains a fun game from beginning to end, therefore I am rewarding the game with Liked-A-Lot Sure, it does show its age a tiny bit, but overall experience is what matters

The improvement in controls and multiplayer performance really shines through and make for one big extravaganza Sadly, you will be stuck playing through the initial versions of the activities, which only goes so far Once I got over that hump, I found myself just having a good time with friends and family In the end, that is what matters the most Thanks for watching, and be sure to subscribe to GameXplain for more on Go Vacation and other things gaming