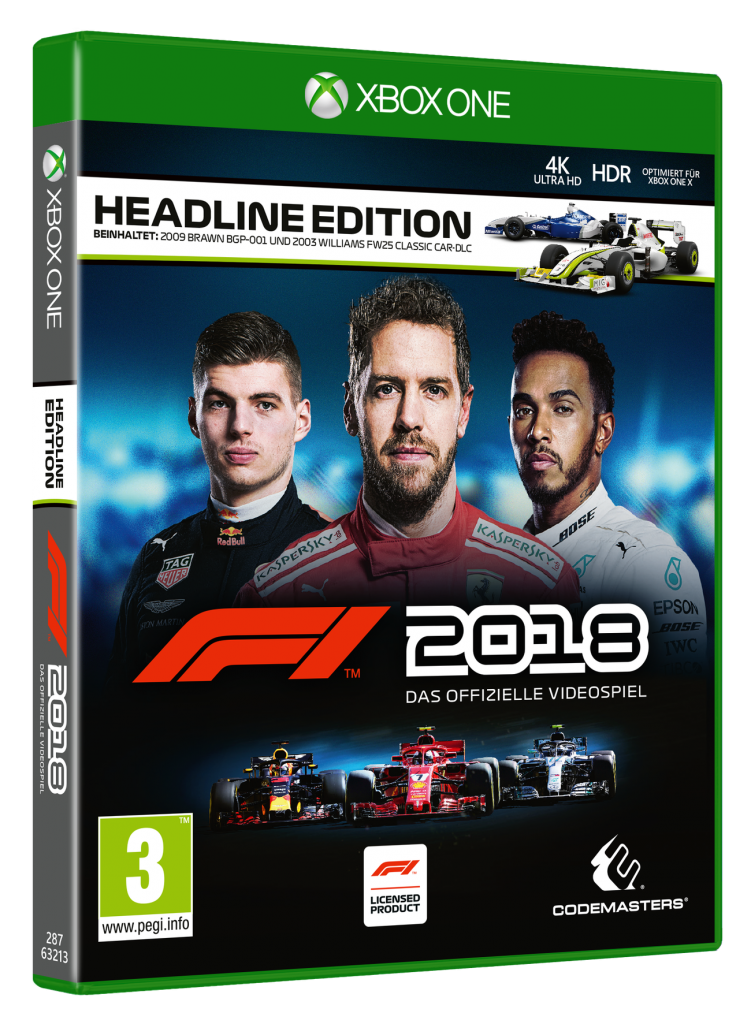 Review copy supplied free of charge by the publisher.

Another year, another F1 game from Codemasters. With such limited development time between each new release hamstringing what Codemasters can do with the franchise what we’ve seen over the years is a steady iteration, each new release tweaking the formula in various little ways with maybe one or two larger changes or features getting shoved in as well. F1 2018 doesn’t break this tradition, offering up just a few changes here and there and a coupe of new features.

The most obvious change is the brand new Halo system. No, Master Chief isn’t driving for any of the teams, rather it’s a new safety feature that was brought into the real-life sport. A chunky bar of sorts has been added around the cockpit of every car on the grid with the idea being to protect the driver’s noggin, but the downside is the sizable beam that supports the halo. This thing sits right in the middle of your vision in cockpit view unless you use a slightly hidden menu option to get rid of it entirely. Just like the real drivers, you’ll get used to this new obstacle, but for the first while having a support beam in the centre of your vision is utterly strange and on straights I found myself veering slightly to either side in order to get a better view of my entry to the corner.

The other big feature touted by Codemasters is actually one resurrected through the dark art of Necromancy. Yes, returning from its brief appearance waaaaaaaaaaaay back in F1 2010 is the ability to chat to the media, giving short comments to answer their many questions. The idea here is that you get about ten seconds to read all the available answers and then choose whichever you think is best. The answers that you give can and will impact your team’s view of you or even influence specific departments, thus if you say that the downforce was lacking the appropriate department will take note, though exactly what that means I’m not sure. And likewise, if you simply state that the car is a horrible mess then McLaren’s opinion of you will drop faster than my opinion of sugar-free Coke.

I love the concept of the media interviews and how they can affect your contract negotiations with the team or hurt the morale of the people in charge of developing new parts for the car. However, the execution is the problem. In real life, Formula 1 drivers will often say detrimental things about their team or the car because of their heightened emotions and the adreneline coursing through their bodies. In the game you don’t get the same effect, so you’ll almost always pick options that will keep your team happy, because why wouldn’t you? Codemasters try to combat this by giving you a limited selection of answers, sometimes making it so that you don’t have a positive option available.

Like before there’s some incentive to take part in the practice sessions in the form of five objectives that earn you resource points which can, in turn, be spent to further the development of the car. The problem is these five objectives are always the same, so they quickly become a chore to do. Thankfully Codemasters have noticed that this is an issue, but instead of fixing the origin of the problem by perhaps introducing more varied goals they’ve instead just increased the rate at which resource points are given out, so even if you don’t participate in everything you still get some points to play with.

The act of research and development remains pretty much unchanged. You’ve got four distinct areas to work on, and each of those has various upgrades that you can order up by spending your resource points. During the time it takes for the slaves back at the factory to churn them all out it’s possible for upgrades to fail completely, thus setting back development time and presumably earning the employees a good whipping. Again, these things are effected by the answers you give during interviews, so if you anger the people in charge with building a new engine there is a higher chance of things going wrong.

A new change for this years F1 game is that at the end of a season of racing new rules can be introduced that can potentially wipe out a chunk of your R&D work, leaving you to uselessly curse the Gods and rant about how these rule changes never seem to bother Ferrari. However, these seasonal rule changes do help keep things interesting when you want to play more than a single year worth of racing at a time.

Sadly, though, the official F1 license is still keeping Codemasters from implementing A.I. drivers swapping teams, so you won’t see Alonso jump into a Mercedes or Hamilton decide to switch to Ferrari. But on the plus side they have included the ability for the player to switch teams mid-season now. Yes, you no longer have to hold out until the end of the year for that sweet seat at Red Bull or Ferrari and can instead potentially jump ship mid-way through the season. It’s a nice option that speeds things up for players who perhaps struggle to stay motivated throughout an entire lengthy season.

On the track, you’ve now got the ERS system to manage, which if your unfamiliar with is basically a system that harvests energy from braking and turns it into something that can be used to boost the power output of the car throughout the race. Basically, you can choose when to deploy more of that power or when to decrease it, adding a new tactical tool to your driving arsenal, though some might find the complication to driving annoying.

Shoving everything else aside once you get onto the track and racing it’s still extremely good. Tweaks from last year are minimal, mostly having been made to the refresh rate of the suspension. Yes, that sounds utterly boring but it does add a new layer of feeling to the feedback on both controller and wheel. As for everything else the series continues to strike a superb balancing between feeling real while still actually leaning toward the arcade side of the spectrum. You can get away with quite a bit, but the cars still have a savage bite to them if you get too greedy.

By far my favorite aspect of the F1 games continues to be those moments where you’re trying to squeeze every last drop of performance out of a set of tyres that are far past their expiry date because in the distance you can see some dark clouds promising a torrent of rain and a chance to turn the whole race around. Wet tracks feel lethal to drive on and are a blast, as is the dynamic weather system as a whole. Some of the tight street circuits

Meanwhile, the A.I. continues to get tweaked. It’s still weirdly easy to out-qualify it, but in the race proper the other cars are quite capable of going wheel-to-wheel and can get fairly aggressive when it comes to defending their position. Sometimes they get a little too aggressive for their own good, but that’s also realistic since the hot tempers of many drivers in real life Formula 1 can lead to some cheeky antics.

Your career also gets interspersed with invitational events where you get to drive all the classic cars from last years game plus a handful of new additions to the garage. It’s an awesome way to break up the career and the cars are a joy to drive.

Multiplayer hasn’t changed much except for one key thing; a new Super License system has been implemented with the idea being to separate the proper racers from the players who just smash into everybody else. If you’ve ever ventured onto the multiplayer in prior F1 games you’ll know it was a strange mixture of respectful racing and Mad Max style chaos, so it’s nice to see Codemasters finally respond by introducing something that will hopefully help people enjoy their time online a lot more.

Graphically there have been a few small upgrades but for the most part you’d struggle to tell this and F1 2017 apart, at least on the Xbox One where it managed to maintain a solid 30FPS throughout. The character models for the teams have gotten a visual upgrade but still resemble aliens moulded out of clay, the lighting perhaps looks a tad smoother and I think there might even be a few more blades of grass at the side of the track. All in all it’s a slight uptick in the graphics, but you probably wouldn’t notice it unless you had F1 2017 on the screen next to it.

The audio is very much the same as the graphics; a few small improvements here or there. Each of the cars sounds close to their real-life counterparts, and some new dialogue has been recorded for the race engineer. Other than that, I don’t think much has been altered,

The problem with yearly licensed games is that there’s never enough time to do any major overhauls to the game design, which is perhaps why we’ve not seen anything like the lower tier Formula cars or even the inclusion of VR support, something which the community has been crying out for. F1 2018 is very much the same in the sense that all the changes and tweaks are relatively minor, and could have quite easily been made as a paid update to F1 2017. It makes me wonder if Codemasters wouldn’t be better off creating a core F1 platform and then releasing yearly update packages at a lower cost rather than a whole new release.

Despite that, F1 2018 is the best game in the series to date. Building up one of the lower teams by researching new parts and slowly creeping closer to the front of the grid is still brilliant and a few small tweaks have helped make career mode even more entertaining, even if the whole media interviews idea still needs some work. Meanwhile, the on-track action is simply superb.

So, do I recommend it? Yes. And no. Maybe. If you already own F1 2017 I don’t see a pressing need to rush out and buy this, and would probably tell you to wait until it pops up on sale unless you’re a die-hard F1 fan who loves to have the updated cars and drivers. But if you’re still on F1 2016 or older then it’s worth the jump up to the latest entry where you can enjoy awesome racing, a great career and multiplayer that will hopefully be free of morons.