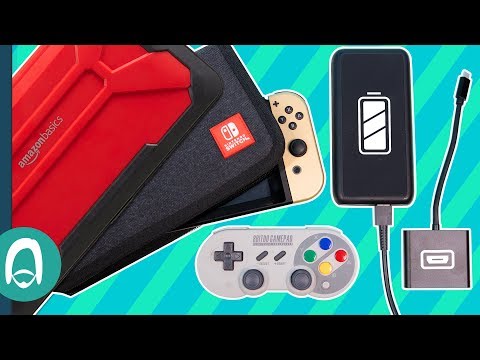 But that other 10% of the time, I'm traveling, or taking a dump When I toss my Switch and it's accessories into my bag, I want it to take up as little room as possible So here are some travel accessories that I think are essential to get the most out of you're remote play sessions and to keep your switches footprint nice and tiny (upbeat music) If you're not gonna play docked on your trip, then the Switch unit is pretty feature-packed as is It's got two controllers right there on the unit, that's all you need

The most essential travel accessory is a case If you're one of those guys that wants to bring a million controllers, a million games, a dock, then you're gonna want a big old case That is, if you want your switch to be in it's own case or just take up all of this room I've got other things to worry about, I want my Switch to take up as little room as possible For a long time I've been a big fan of this PDP premium travel case

I have the regular old gray one because I bought it at launch but now there are all different types of designs to choose from and they're very cheap Some of the designs go for just $10 I like the soft case because it's malleable If the case takes up too much room, I can just squeeze it smaller And I'm just tossing it in my bag anyway, so I don't need that much protection

I really like the game slots Other cases have bulky annoying cartridge flaps I don't have any physical games so these sleeves are always wasted on me I'm glad that the ones in the PDP case are out of the way I can also shove a portable dock in there, too

More on that later If you want eve more protection than that, a lot of people have recommended to me this Tomtoc case It's got a harder outer shell, but it's still flexible It has the game sleeve, and it comes with this rupple pouch for some reason It's extremely form-fitting, as you can see by the grooves

But then there's this, the Amazon Basics vault case I didn't even know this thing existed It's the biggest one, but that's because it's the most durable And all things considered, it's not even that big The plastic is very hard and the inside looks like something you'd use to carry a gun

The cartridge sleeve is completely unobtrusive The controller grooves actually work The red one is currently only $7 as an addon item on Amazon Prime right now, making it the cheapest case on this list I would expect that price to go up very soon once people start to know about it And this video isn't gonna help

The only thing keeping this from being my go-to Switch case is it's size, which isn't even that big I just don't need that kind of durability I'd rather compromise durability for size But if you're frequently running your Switch over with your car or tossing it out your second story window, then you should probably get this case And some insurance on your next one after you break this one

Lately my go-to Switch case has been this WaterField Designs one because it's classy as (snaps) It looks like a little man-purse You can smell the real leather It has magnetic clasps The cartridge slots are, again, unobtrusive

The inside is super soft and padded very well These sleeves on the inside don't really serve much of a purpose, but there is a zipper on the back where I toss my dock The only problem with this case, and it's gonna be your problem with it too, is that it's $80 $80 Yeah, 80, I said $80

But hey, you're getting real leather and it's made in San Francisco Think about how much women spend on their purses, to what? Carry their phones, their wallets, their, nevermind If you're gonna carry your Switch around with you a lot and you own at least one cardigan, then this Switch case might be for you Otherwise, it's complete overkill Of course, I'm a little biased here because I did not spend that money, they sent it to me

I always bring a travel dock with me, but I never end up using it After the 50 update after market docks have been a use at your own risk accessory So I do not recommend using anything but the official Nintendo Switch dock But I do have a theory

This particular one is by Fast Snail, it seems to work just fine for me But even better, Spawn (mumbles) just reminded me that they make these little dock casings for the official Nintendo Switch dock So you can make your official dock take up much less room and you won't risk breaking your switch You just might risk ruining your dock Don't do this if you want your switch dock back

I also use this Ravpower 26,800 milliamp hour battery, which was complete overkill Having two USB ports is great in case you and a friend both have dead phones or something, and having a USBC port is even greater I've used this thing to give my Mac Book some extra juice while editing on a flight Though I've never actually used all of it's capacity so I've since downgraded to this smaller 10,000 milliamp hour battery, which is plenty I'm also very good at conserving my phone's battery life so my phone rarely ever dies in the midst of travel

But it's good to know you have something in case it does They all have iSmart ports so they detect the voltage that's necessary for best charging Unfortunately, neither of these will be fast enough to charge the Switch in the midst of intensive gameplay, but it will prolong your play time In my experience, it's about slightly less than breaking even I forgot a USB to USBC cable

Always bring an extra of every single cable that you want to bring Either plug one of these in way before the battery dies, or better yet, only charge your Switch with it when the Switch is off That way you don't screw up your battery This one also has wireless charging, which is super neat, but I'll never use it If you're gonna play docked at all, a pro controller is very important

I don't recommend just tossing it in your bag, though, because every time something knocks up against it, it'll turn on, draining its battery Which could also wake up the Switch, draining its battery You also don't want things pressing up against the controller's joysticks, which could cause long term damage You ever turn on an N64 and the cursor just goes whoop This semi-hard shell form fitting case fixes this issue perfectly

Although I have to admit, I stopped taking the pro controller with me and started taking the SN30 pro It's smaller, it slides right into my (mumbles), and it connects much easier to my Mac Book so I can use it for more than just my Switch I have a whole video on why this is my favorite Switch controller, mostly because of it's phenomenal D pad, but it just went up a peg because of how easy to connects to my Mac Book and how well it works with all my emulators So we talked about a lot of things today, and if any of those things interested you, as always Amazon links to those will be in the description below and those links help support our channel If you haven't noticed, I travel pretty light

My priority is to have a quality gaming experience while leaving enough room for all of my other devices, which are arguably a little more important I mean, I would say my camera or my Mac Book is certainly more important than the official Nintendo dock That thing is huge That thing is the size of my camera My camera is smaller than that, actually

Maybe you favor durability more, maybe you favor quality more and you need a separate pro controller for each of the eight players in your hotel room playing Mario Kart 8 That being said, what do you guys think? What do you bring with you when you travel, especially related to the Nintendo Switch? Leae it in the comments below, at me on Twitter, and all of this other social media garbage As always we've got new videos and livestreams all of the time Our schedule is usually in a pinned tweet, but this week we're not doing any Twitch streams 'cause I'm away But you've still got Wulff Den Live every single Wednesday at nine PM eastern time, that will be live here on YouTube

com/wulffden And as always, the most important things that you can do is subscribe and share this video with a friend that you're gonna travel with so you can get some ideas of what you need so you can play together Thank you guys very much, you have yourselves a very good week (upbeat music)