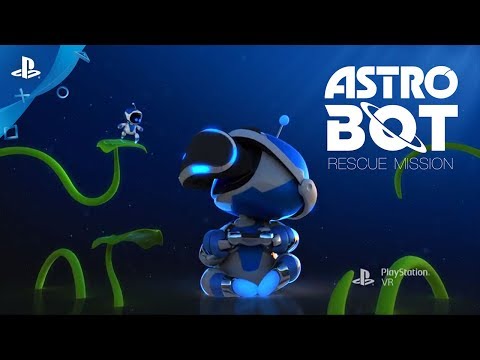 I'm creative director and producer of Japan Studio on our latest game called Astro Bot Rescue Mission Astro is the hero of this story, and he is the captain of a spaceship which is full of these adorable robots So at the beginning of the game, there is an incident in space and Astro and his crew get dispersed all over space, actually leaving Astro alone And that's when you and him become a team and together go on a rescue mission to retrieve all of Astro's crew In VR you exist as a human being and so we are making sure that as well as controlling Astro, there are lots of ways for you to interact with the environment

You can headbutt parts of the scenery to create paths for Astro to progress The DualShock 4 also becomes a host of gadgets that the VR player can use to help Astro For example, it can shoot shuriken Using the shuriken, you can cut bamboo forests You can burst enemies, but you can also plant the shuriken into things to create platforms for Astro to jump on

You also have a role in this game As well as controlling the character, we are creating all these first-person interactions And it is this kind of combination of both types of interactions that make Astro Bot quite unique One of the big moments in the game is when you get to run along the arm of this giant robot And these kind of moments are really, really powerful in VR because of the sheer scale of these characters

As you get off this giant robot arm and you start jumping from leaf to leaf, the gameplay is actually seen from underneath, and you have this verticality that is unique to VR and especially powerful for platformers Boss fights in action games are always like really, really big, important moments There is this gorilla on top of a building, and it is a combination of jumping and punching, but also using the gadgets as a compliment for you and Astro to work as a team to defeat these massive beasts We are really, really thankful to all the fans who have been supporting us over the months to create this game We hope that you're going to enjoy playing Astro Bot as much as we've enjoyed making it

How to BRICK and UNBRICK 3DS console

How to make DS Games look better on the 3DS