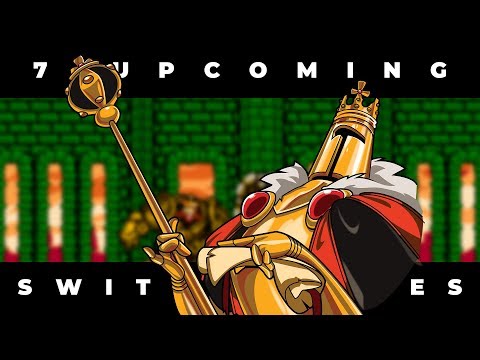 Hello! Welcome to Indieformer – your hub for everything indie With the Nintendo Switch quickly becoming the one of the key places to play indie games, I thought it would be a good idea to run over some releases slated for the platform in 2018

These games aren’t exclusive to the Switch, they’re also coming out on Steam, where when released – I’ll get to look into them with more depth But for now, here’s a short overview of 7 Upcoming Indie Games that are coming out on the Nintendo Switch in 2018 The final chapter in the epic Shovel Knight: Treasure Trove saga is coming out this year In King of Cards you play as King Knight, who’s on a Journey to best the Three Kings that rule over the land And how does he do it? With bashing, bouncing and dashing of course! To go along with this – Plague Knight, Specter Knight and King Knight are being released in an amiibo 3-pack

Unlocking another fairy companion, unique armour sets for each character and additional challenge stages to name a few Of course, in true Shovel Knight fashion, you’ll get to experience all this in an 8-bit world once again Tired of the endless runners, sloppy pixel work and games filled with countless in-app purchases; developers Easy Trigger Games are bringing a cyberpunk-ish retro platformer to PC and consoles Huntdown is a handcrafted, old-school pixel style arcade shooter that places you in the mayhem-filled streets of the future, where you need to run, jump and take cover from the gangs that roam the roads With local co-op, you get to kill the henchmen, take their guns and Huntdown the leaders

You go through levels collecting bounties and fighting your way to the final bosses All hand-drawn, pixel by pixel, in a 16-bit style, Huntdown looks like it’s going to be a winner I can’t wait to revisit this when it fully releases on PC The king is dead at the hands of Viking invaders Bad North is a charming yet brutal real-time tactics rougelite where you need to defend your island kingdom against a horde of Viking warriors

Having procedurally generated islands, you can’t just use one tactic to defend your home Each island will require you to look at every nook and cranny to figure out the best defense plan Coming to PC, Switch, Xbox One, PS4, iOS and Android in the Summer of 2018 – there will be a way to get your hands on this game The goal is to slam your friends into a pit in the middle of the map With five modes, 10 levels and an overseer that’s sounds like it comes from Rick and Morty, SLAM LAND looks like it’s going to have you and your friends in stitches

This couch fighting party game is pretty self explanatory, the visuals do most of the explaining If you think you’re ready to try and impress the big blue man in the sky, SLAM LAND releases on the 7th of August Embodying the rich and charismatic item of a square, you need to survive the ever increasing challenge of everything trying to destroy you The goal is to get through some 300 handcrafted levels to defeat 10 unique bosses and become a true hero But the glory doesn’t need to be a lonely experience, you can play with up to 4 friends in each of the modes

And if someone needs to leave you can just drop-in or drop-out as you please With unlimited survival modes, daily challenges and a gamemode that pits you against your friends, Flat Heroes has a promising set of features leading up to its launch on August 2nd I just had to pick Wargroove to include on this list If you’re like me, you may have once played a game called Advance Wars on the gameboy Wargroove is the 2018 version

Differing in characters like a playable dog commander, this looks like a casual turn-based strategy game that 4 players can enjoy With over 12 commanders that you unlock through the story mode, each have their own lengthy campaign where you get to explore their personalities and motivations There’s local online multiplayer with the option of competitive play too But with a release date yet to be confirmed, it may be awhile before we see this one As a demon army besieges his village, a young ninja ventures through a cursed world, to deliver a scroll paramount to his clan's survival

Packed with character upgrades, abilities, hidden levels and many story arcs; The Messenger sounds like the next big 8-bit action platformer But the unique thing about The Messenger is it’s not just 8-bit It begins with a simple story that transforms into an epic time travelling tale revealing itself as a 16-bit Metroidvania packed with plenty of replay value Releasing sometime in 2018 to PC and the Switch, I’m really looking forward to seeing this one And there are some games that are coming to the Switch, in 2018

If you think I should cover more indie games on the Switch, let me know below Or if you would like to see what else is coming up this year let me know too Thanks for watching, I’ll you next time here on Indieformer